Looking for a MS-DOS cars game

Here are few things I remember, but it was not sufficient for me to find the game on a search engine: 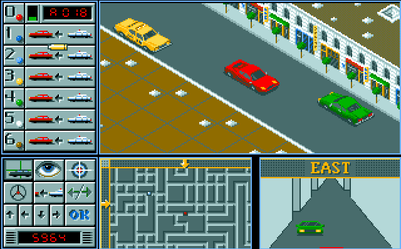 It has a 'gangsters mode' and a 'police mode', and the object is to escape the city, or to capture criminals before they escape. French developer, too.

8
Submarine diver game where you had to collect fish and other things for your aquarium
9
Identify this Amiga game: It's just like Rocket League
21
Looking for a platformer game
6
Searching for Swedish Mac game from the early 1990's where you try to sneak out of the house
9
Looking for a 90's shooter-platformer game
1
Identify World War 2 European theater PC wargame circa 1995
8
Which was this game with collectibles, that came with a washing machine detergent?
5
Cold war submarine game for the ST
5
MS-DOS adventure game heavily based on Blade Runner, circa 1991