I'm looking to find the name of a (purportedly) educational Mac game I purchased from a book fair handout around 1990–91.

The concept was that you would make up the rules to your own board game on a tic-tac-toe like grid. The computer would then play against you, and you told it who won. It would then use that information to try to infer the rules of the game and improve its play on the next round.

A similar program existed on the Apple II. The Mac version is likely a derivative. – @AlexHajnal

The game is almost certainly A.I.: An Experience with Artificial Intelligence from Scholastic (the ubiquitous US educational publisher). It was originally released in 1987 for the Apple II and was later ported to MS-DOS and, with enhancements, the Macintosh.

The game is played by placing pieces onto a grid. The human player decides ahead of time what the winning state of the board is. The player and the computer then take turns placing pieces. By observing the game and asking the player questions the computer teaches itself the rules. Over the course of a few games the computer will become quite good at playing.

The program allowed the player to 'look under the hood' and see what heuristics the computer has taught itself. In addition, a player could add their own heuristics. There's lots more info in the manual.

Here's a page from a 1992 Scholastic software catalog: 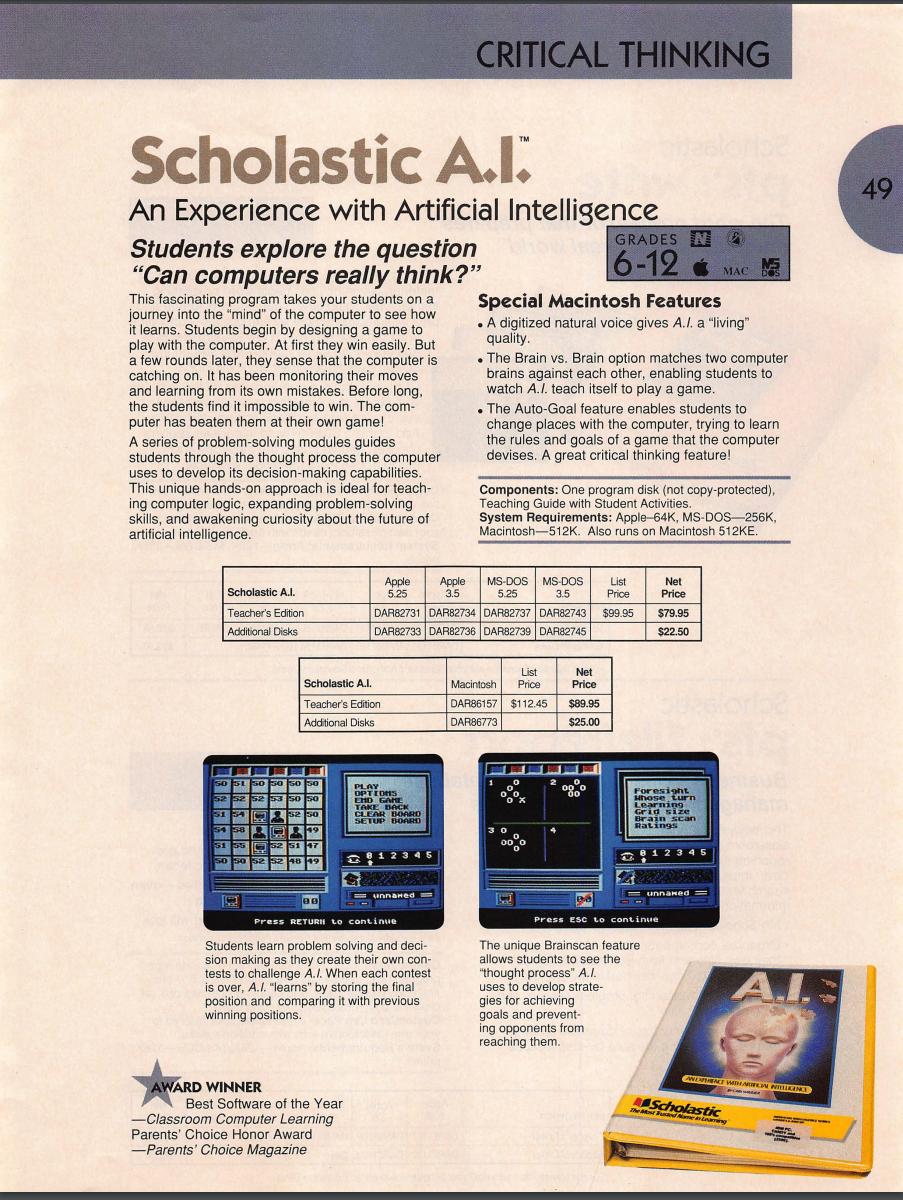 Not the answer you're looking for? Browse other questions tagged apple-ii identify-this-game mac-os-classic or ask your own question.

9
Resources for developing in Classic Mac OS MPW?
8
Submarine diver game where you had to collect fish and other things for your aquarium
2
Educational DOS game involving teddy bears
4
Need help identifying an Apple IIc game/possibly educational with a top-down view
21
Looking for a platformer game
6
Searching for Swedish Mac game from the early 1990's where you try to sneak out of the house
6
Looking for a MS-DOS cars game
8
Looking for a 90s Macintosh game
1
Identify World War 2 European theater PC wargame circa 1995
4
Looking for an educational game from long ago