I recently learned that mid 1980s, Motorola was working on a discrete graphics chipset that would be a great leap forward from its 6847 Video Display Generator and 6845 display controller. It was called the RMS (R.M.S. or Raster Management System) chipset and consisted of the MC68486 and MC68487 ICs.

It (would have) had the following highlights:

Motorola had gotten pretty far with the development of this chipset and extensive documentation was already written and available (RMS Manual 1984). EDIT: I also found some promotional material. 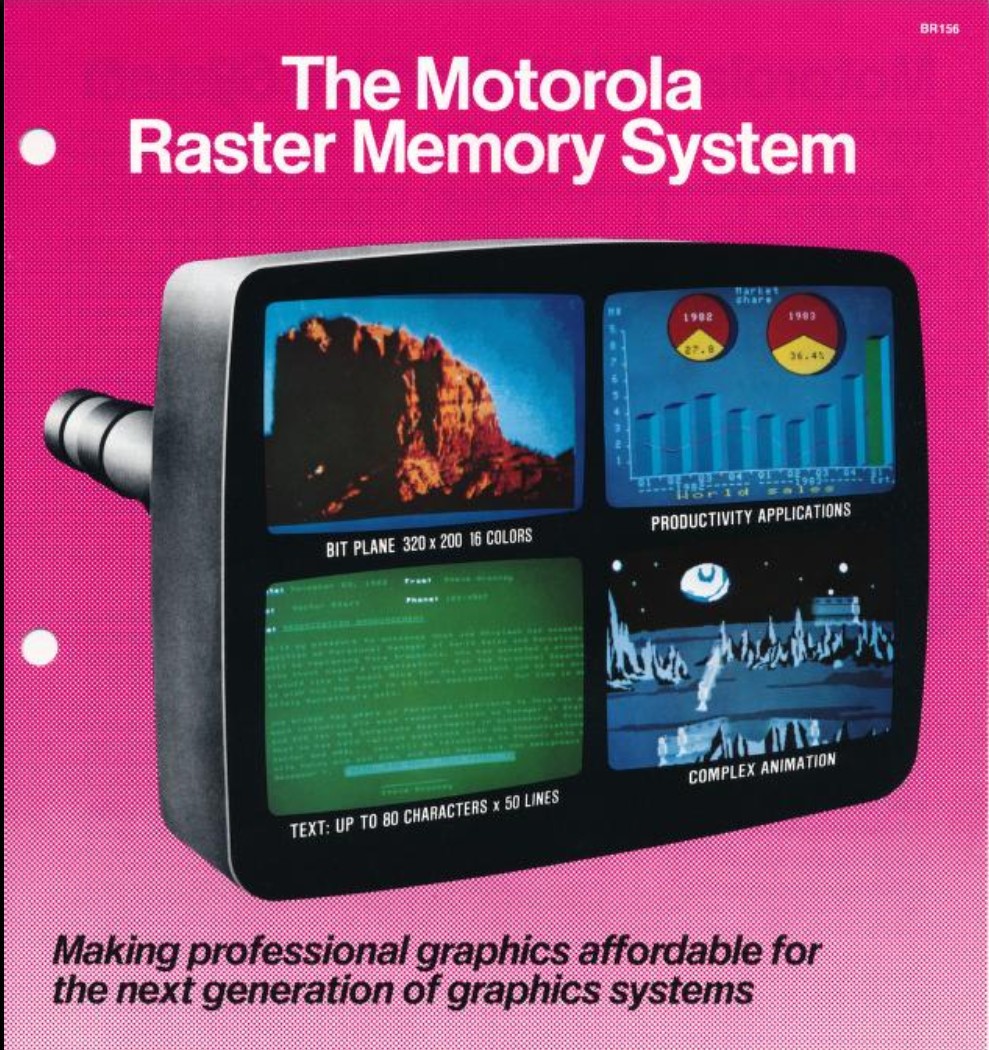 In the book "CoCo: The Colorful History of Tandy’s Underdog Computer" (ref), authors Boisy Pitre and Bill Loguidice describe how the RMS originally was developed in conjunction with or at least at the same time as the Tandy Color Computer 3, which was released in summer 1986. Presumably then, the CoCo3 was developed during 1985-86.

However, the manual for the RMS is dated to spring 1984 implying that the RMS was developed during 1983. It was also known beyond the walls of Tandy and Motorola as documented by several public mentions spanning 1984-1986: 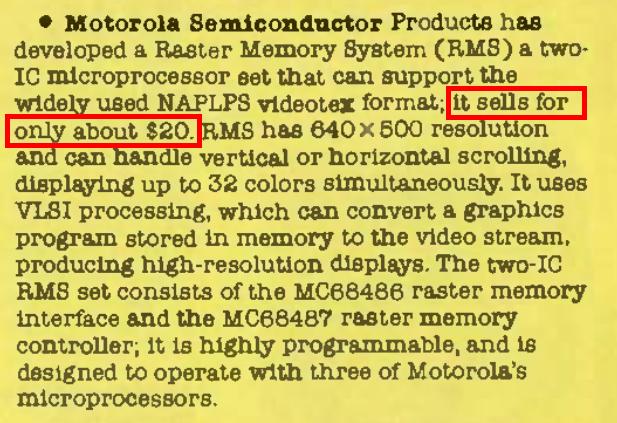 However, 1983 was the year of the development and release of the CoCo2 and, incidentally, also the mysterious "Deluxe Color Computer" that never came to fruition. When the CoCo2 was released (and the Deluxe was dropped) some time presumably went by before Tandy started considering the CoCo3.

The Deluxe Color Computer is described in the book by Pitre and Loguidice, as well as his blog Late Night CoCo.

So I have two main questions:

Thanks in advance for any comments and replies!

I found some more leads. Apparently, according to the RMS brochure, the system was supposedly showcased at the 1984 winter Consumer Electronics Show in Las Vegas. I tried to get more info, and I found some more mentions of this being demonstrated there, like the DataQuest Newsletter. If anyone has more info on whether this actually happened, or was merely planned, but dropped at the last moment, please leave a comment.

Based on the absolute dearth of information on the Motorola 68486/68487 video chipset (RMS), I would conclude that it was never officially released as a product for OEMs, and was therefore never used in any actual computer products.

[UPDATE: Per OP finding, it appears that one company, Micro Concepts of the UK, was offering an SBC based on the 68000/010 with RMS, for sale in 1987. They advertised the product multiple times.]

The obvious reason that Motorola would have undertaken this project is that part of their business was creating peripheral controllers that easily interfaced to their microprocessor products. Prior to 1984, Motorola had great success in selling CRT Controllers (6845) for many different machines, including those based on the 6502, Z80, and even the early PC graphics boards. Additionally, they had a successful partnership with Tandy using the 6847 in the CoCo 1/2 and Dragon's clones. By 1983/84, Motorola was likely keen to update this video peripheral hardware to match competitors' capabilities and to make use of more advanced 16-bit processors like their own 68000.

The reason this work never came to fruition is somewhat speculative, but I can see two obvious factors that would have killed the RMS project: 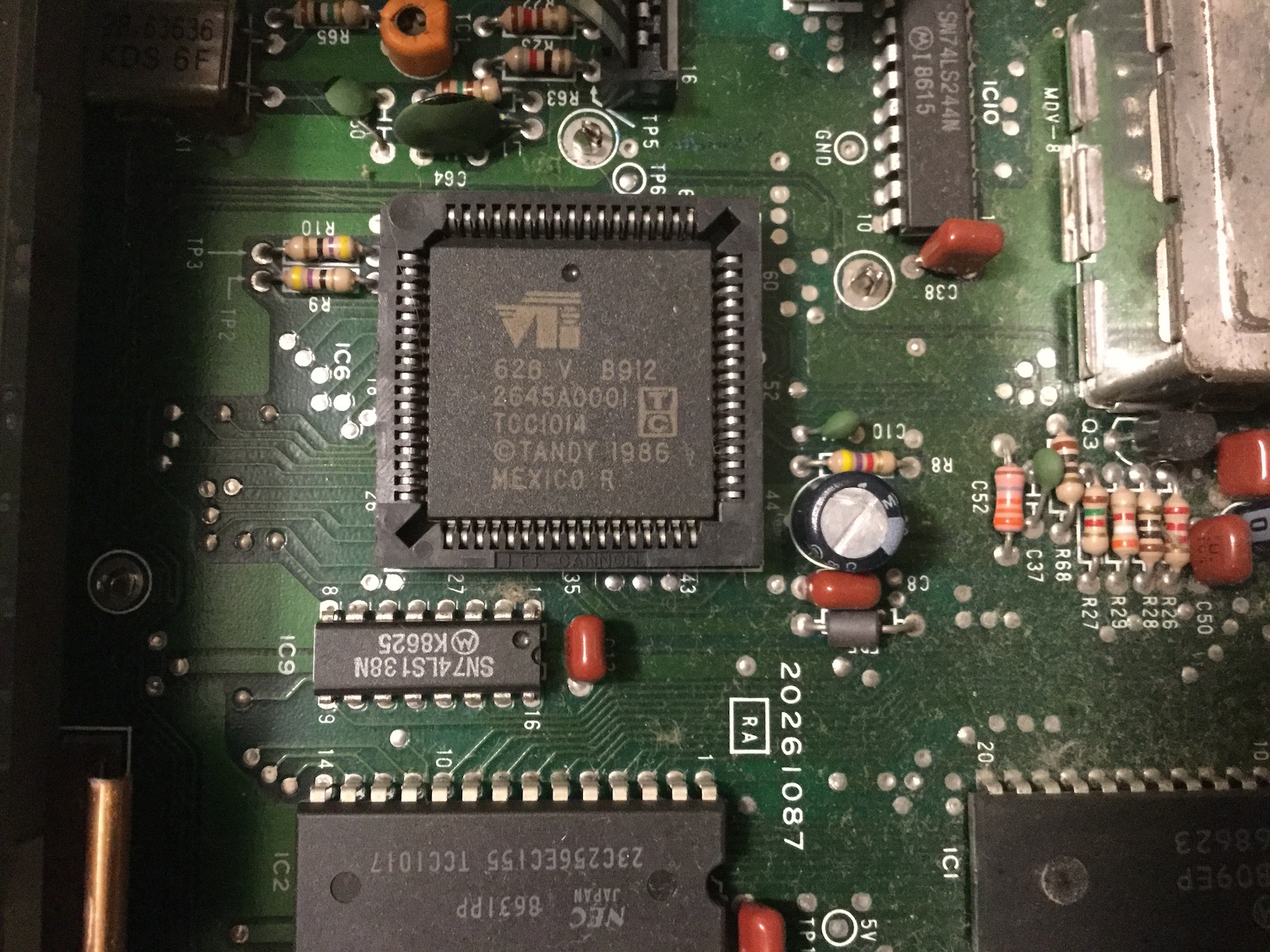 With some Google sorcery, I finally located a system that used the elusive RMS chip set: The Microbox 3 manufactured and sold by UK-based company "Micro Concepts" from Cheltenham! I can only find it described in detail one place and that is in the Electronics & Wireless World issue of May 1986. On page 63, it is announced as the British rival to the Amiga and the description leaves little doubt:

Microbox 3 is a colour graphics computer designed around the 68000 (or 68010) processor running at 8MHz and Motorola's Raster Memory System chip set. It offers 40 different screen modes, with resolution ranging up to 640 by 500 pixels, plus features such as a 4096- colour palette, eight reusable sprites and a virtual screen of up to 512K in size with smooth horizontal or vertical scrolling.

Apart from omitting the parts numbers themselves (68486 & 68487) the specification match the RMS exactly, and it is explicitly named Motorola's Raster Memory System chip set. There's little doubt that this is the real thing: 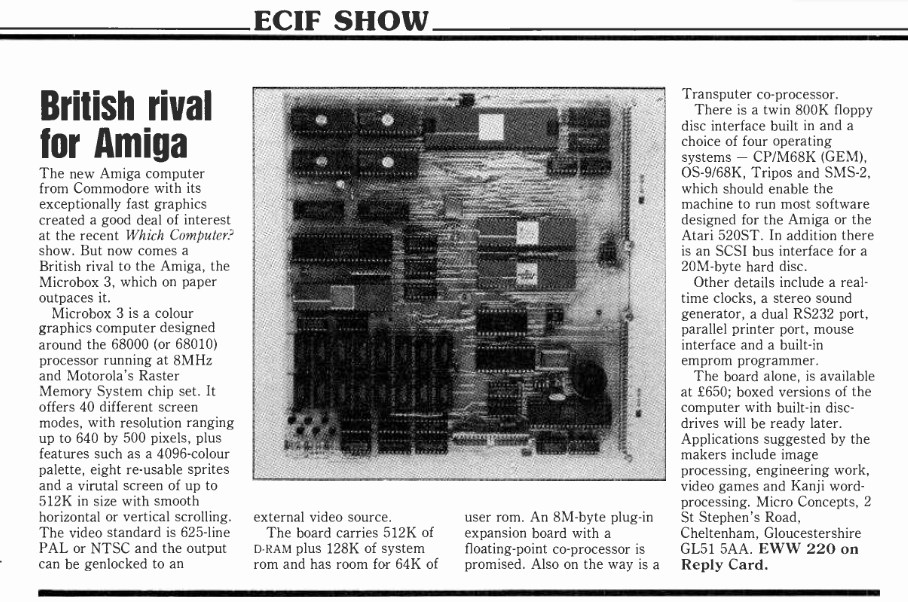 There are a number of other mentions of the RMS chip set in very disparate places around the world, but the above system is the definite proof that Motorola DID release it and sold it and that has been used. The greatest mystery is how this could have gone under the radar. According to one source, the RMS was showcased at the winter CES 1984 in Las Vegas. In contrast, the Amiga prototype drew quite a lot of attention at the summer CES that very same year!

The few only other sources confirming the existence of the Motorola RMS beyond 1984:

All these are leads worth exploring further. Of course, full attention should be directed at the UK company who developed and sold the Microbox 3 boards! With loads of luck, there may still be RMS specimens knocking about out there, though I wouldn't hold my breath. :-(

Not the answer you're looking for? Browse other questions tagged graphics color-computer motorola-68000 6809 coco or ask your own question.

3
Were any 680x0 features specifically requested by a customer?

38
Advantages of a Hitachi HD6309 versus a plain Motorola MC6809
17
Motorola 6809 Stack Blasting
4
Motorola MACSBUG source code?
13
Motorola 6809 two stacks design
10
How to connect a Tandy Color Computer to a Composite Monitor?
7
What's up with the ASxxx and the "CoCo Disk BASIC binary format"?
3
Loading a Tandy CoCo or a Dragon 32 machine code program from cassette with multiple "name blocks"
2
Where can I find the Motorola Application Note AN-754?