Why do the i8080 I/O instructions take a byte-sized operand to determine the port?

can only take 8 possible values? What would it be indexing otherwise?

The 8080 does not have any I/O Ports. It's a microprocessor, not a microcontroller.

(Maybe the system you're playing with does have these 8+8 ports, but they are always external to the CPU)

The 8080 has 16 pins for the address bus A0-A15, 8 pins for the data bus D0-D7, and pins DBIN and !WR to time reads and writes. The processor re-uses the data bus to output information ("processor state") about what it will be using the address and data buses for; an additional pin called SYNC is pulled high when this information is available. The remaining pins are for power, clock, reset, interrupts, and direct-memory-access.

Most systems using the 8080 would capture the processor state from pins D0-D7 using a simple latch. Intel made a special chip (the 8212) that did the same thing, more expensively. Certain bits of the processor state were found to be so useful that later Intel processors dedicated pins just for their use; in particular, the IO/!MEM pin which specified whether a read/write was to memory or to I/O space.

Some of the most common uses of the address and data buses were as follows:

By decoding the processor state bits, one could therefore separate the targets of IN and OUT instructions from ordinary memory. The was considered an additional "address space". Considering that ordinary memory is limited to 64k, you might need that extra address space. Intel even touted "512 Directly Addressed I/O Ports" -- which was true if your hardware distinguished the 256 IN addresses from the 256 OUT addresses -- but that was rarely done as it was an unnecessary complication.

Could you ignore the processor state bits, and just put everything into one address space? Certainly, and some systems did just that. However, such a scheme reduces the amount of general memory available to less than 64k.

The question of whether something is "memory" or "I/O" depends upon how it responds to various control signals. There is nothing that would prevent anyone from wiring an I/O device so that it would respond to a range of "memory" addresses, and for some kinds of I/O device that could be more useful than wiring it to the "I/O" read/write signals. On the other hand, an I/O device which is wired to behave as a memory device will respond to an instruction that writes to HL whenever HL holds its address, without regard for whether HL was supposed to hold that address. An I/O device that response to I/O address 0x57 by contrast will only respond to an "out 57h" instruction, and the likelihood of the processor encountering that byte sequence by chance is smaller than the likelihood that HL might end up with a bogus address.

While it would have been possible to make the OUT nn instruction take a two-byte address operand, that would have made the opcode bigger and slower while offering little benefit for most applications, especially given that the applications which would need more than 256 bytes of I/O space would also need to access I/O devices using register-based addresses and should thus likely be wired as "memory" devices.

From the 8080 Assembly Programming Manual 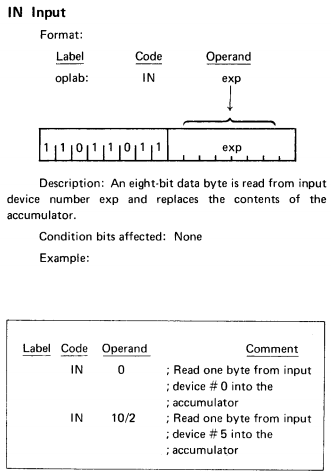 The OUT instruction has a similar description.

in some actual source code could mean that the particular hardware the program runs on implements (decodes) only the three least significant address bits, writing to a port address greater than 7 would wrap around to the [0..7] range, do weird things, or simply be ignored.