Why does this Apple //e drops into system monitor when booting?

I recently purchased an Apple //e online as well as a BMOW Floppy Emu in order to emulate some disk images. After working with it successfully for awhile, this monitor consistently appeared in lieu of the expected program. This occured after many resets/power cycles over the course of a few hours.

This monitor consistently appears when:

Why would this monitor consistently appear when attempting to boot from floppy? What types of debugging techniques can be used to find the root cause of this issue?

Monitor when booting a ProDOS disk: 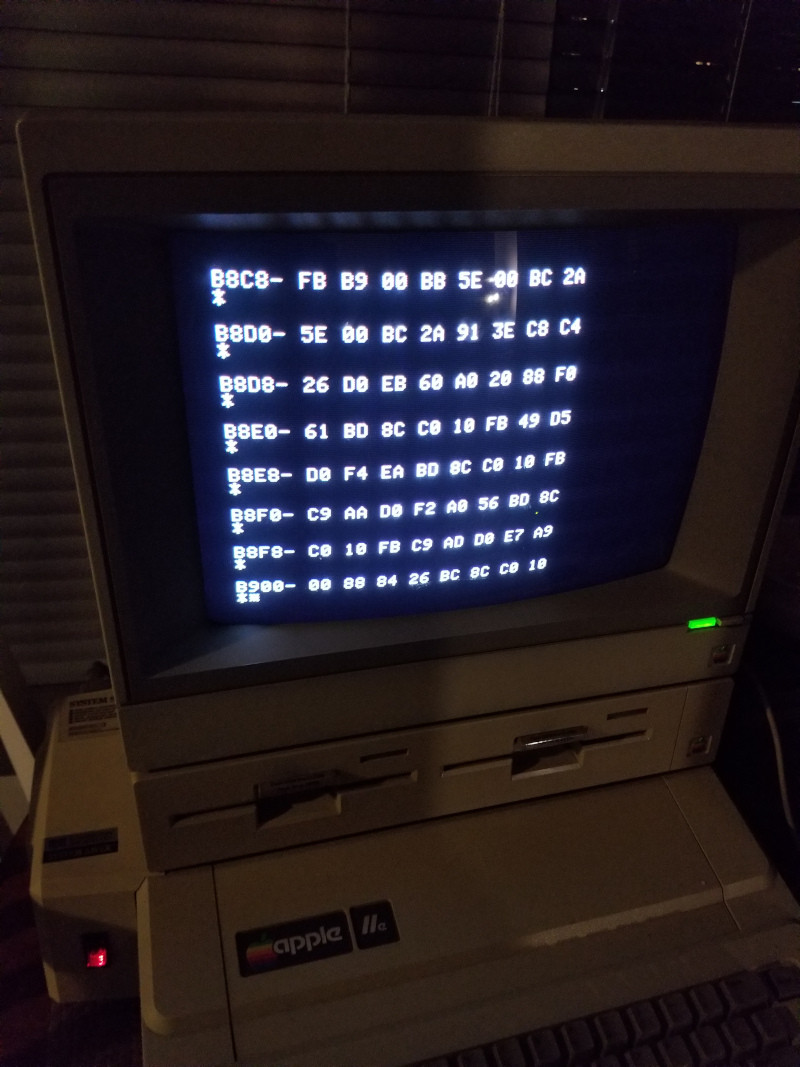 Monitor when booting a DOS3.3 disk:

If your Apple is dropping you at the monitor, it means it tried to execute some set of instructions that went off the rails somehow. I'll admit I am fuzzy on all the details, but generally you can attribute that to either the Apple motherboard, or a peripheral, or code. The trick is to do a series of isolation steps to keep reducing complexity until you can pinpoint the culprit.

For example, removing ALL cards from the Apple and powering on seems to work as expected, which would indicate the core system is a-ok.

At this point, you can try one or more alternate disks. If the problem persists across multiple disks, you can safely rule out a single bad disk and focus on either the Duodisk hardware or the controller card.

Backing up a few steps, if you reinstall the disk controller card, connect the duodisk and boot a DOS 3.3 disk without any problem, then you would draw the conclusion those components are all working as expected and add the next most basic card into the system (probably the 80 column card). rinse and repeat.

Ultimately, you should be able to narrow things down to a single item (the disk controller card, or the duodisk hardware, or a bad memory expansion, or whatever).

What kind of error is this and how can I remedy it?

To start with, this isn't an error, but the monitor program.

Look here for a short command list - and Apple Monitors Peeled for in detail information.

To leave it press CTRL-C - or RESET. It's an Apple II, so RESET will always help and bring the system into a default state while destroying as little as possible.

Now, why the system enters the monitor during floppy operation can not even be speculated, at least not in a serious manner.

As said before, pure guessing at this information level.

Does the dump on screen have any meaning

Jau, it shows you some memory locations - 8 bytes with every press of return :))

$B8xx is somewhere at the top of the first 48 KiB of RAM, depending on the Apple model and DOS you're using this might be some part of DOS code. But without more information it's hard to tell more. Often (not always) the first displayed address is the one where the interrupt has that - so not really useful, except telling that the CPU was just running some DOS code.

FWIW, starting after the first FB (which appears to be the end of a previous instruction), this disassembles as:

Posted and wikified in case anyone more knowledgeable of the Apple ][ can do anything with it! (Disassembly courtesy of https://www.white-flame.com/wfdis/).

As others have mentioned, the Apple will drop to the monitor when it attempts to execute code that doesn't make sense (illegal/invalid instructions for example). As you have mentioned, it works fine when you boot the machine without the disk controller card inserted. This is good because it at least suggests the core system should be OK.

The Apple II will attempt to boot the first disk controller that it finds (descending from slot 7 down to 1) when you turn it on. The non-disk controller cards are probably not contributing to the problem, so I would focus on the disk controller.

First off, I would remove the disk controller and attempt the system test. This is done by holding down the closed apple (the one on the right of the keyboard) and pressing control-reset. This will do a system test that takes ~20 seconds. If it comes back with "System OK" then things are probably good with the Apple itself.

Second, put the disk controller back in with the DuoDisk attached. Put in a disk that should work. Power on and I presume you'll hit the monitor. See if you can press Control-C and then hit return and get to the BASIC prompt. If it doesn't go to BASIC, something is screwy beyond this. Most likely it will and you should be able to type "NEW" as a sample command without error.

Assuming the disk controller is installed in Slot 6 (its default location on the Apple II), type PR#6 and hit return. If you're in the monitor, you could type C600G and hit return to effectively do the same thing. This should cause the disk to boot.

My suspicion is that the controller card PROM is corrupt for some reason. If the PR#6 or C600G doesn't cause the disk to boot (and make the head alignment chatter), then I'd say that this suspicion is correct. However, let us know if it actually boots instead.

If the controller is no good, you should be able to find a replacement on eBay without too much difficulty.

12
How do I troubleshoot an Apple //e with no power light?
10
Apple II: HPLOT crashes system. Why?
22
Why did Apple remove booting from external drives in later IIc ROM versions?
6
Why does the Apple IIgs FPI chip buffer the A14 address signal to the ROM?
8
What Apple System Monitor/Integer BASIC ROM features were removed in the Applesoft II/Autostart ROM?
3
How exactly does the Apple II monitor set and use the "last opened" and "next changable" locations?
6
Why does _Beneath Apple DOS_ show FM encoding rather than GCR?
19
How did the Apple IIGS automatically slow 5.25 inch disk I/O code for backwards compatability?