When did the 65C02 become available?

The Wikipedia article on the 65C02 is missing an introduction date for any of the mentioned models. I did a bit of poking about with no success. Does anyone know when they were introduced?

The June 1983 issue of Softalk magazine carried an article on the 65C02. It opens as follows:

This month's discussion deals with a new version of our beloved 6502 microprocessor known as the 65C02. Although the chip has just been released within the last few months and has yet to find its way into the mainstream of computers, it seems likely that we'll be hearing more about this item in the upcoming year.

It goes on to say:

As sometimes happens with these things, though, some of the key persons involved with the 6502 went to work at a new company. Western Design Center. This company, then, is the original source of the new 65C02 chip. But the story doesn't end there. Western Design Center has sold the design to at least three independent manufacturers, Rockwell International, GTE, and NCR. These companies took the initial 65C02 design, corrected initial design errors, and added their own enhancements.

The picture at this point is that each of these three companies will be marketing its own version of the 65C02. The chips are more or less the same, but the Rockwell chip has the largest instruction set. 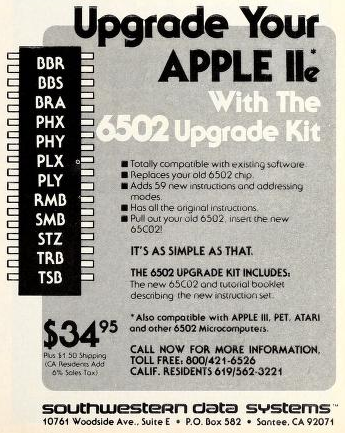 There are no results from 1982 or earlier in a text search of archive.org, so I conclude that the 65c02 was introduced in the first half of 1983.

Post Script: Southwestern Data Systems produced a booklet on the 65C02 (copyright date 1983) which reproduces the Softalk article almost word for word. It also includes a description of the instructions, and a copy of Rockwell's datasheet for the R65C02.

15
How are 6502 and 65C02 JMP(abs) processed internally
29
Why did Sinclair choose the Z80 for its range of home computers?
10
PDP-8 transistor count
22
How good was Woz's FP code?
9
How is PETSCII used by assembly-language programs?
24
What are uses of the byte after BRK instruction on 6502?
11
Why didn't Wozniak's interrupts work on the Apple I monitor program?
21
Why didn't the 6502 have increase/decrease opcodes for A?
3
How to transfer the address of a data block into zero page using the Merlin 8 assembler on my Apple //e?