Acorn's BBC Micro series is well known for the range of add-on processors (or Second Processors) that could be connected through it's Tube interface. These included the 6502, Z80, 80186, and also the ARM Second Processor, effectively a development kit for the processor in Acorn's forthcoming Archimedes machines.

The Archimedes' successor, the RISC PC, was designed to support guest processors inside the main unit. Commerically available options included an x86-based PC card (to run PC-compatible software), and a second ARM processor for use with a multiprocessor operating system.

The Archimedes itself, however, saw very little in the way of add-on processors. The ARM2 processor was designed with a co-processor interface, and the podule expansion bus reserved a set of pins for use by a co-processor podule. The original podule specification notes that:

Coprocessor Podules share the same interface as other Podules, but they are not mapped into the I/O space as are other Podules. In addition to the normal Podule signals, coprocessors require access to the main system data bus, and extra control signals. These are provided by a special Coprocessor Podule connector, which has 96 pins. When a coprocessor is not required, this connector may be used as a normal Podule slot. Note that in this context the term `coprocessor' refers to a dedicated hardware processor, and not an additional general purpose microprocessor system.

I interpret this last sentence to mean they only supported floating-point coprocessors, similar to the x87 chips in PC-compatible systems. The only co-processor podule I'm aware of is Acorn's own (AKA20) We32206 co-processor. Later Archimedes machines (in particular the A series) had fewer podule slots, and the addition of a co-processor would require the use of a custom expansion board in the CPU's socket. Both of these are floating-point co-processors.

Given that Acorn designed both the ARM processor and the Archimedes platform, what reasons would Acorn have to remove the support for general-purpose co-processors in their Archimedes systems, given that its predecessors and successors did support them?

Acorn's BBC Micro series is well known for the range of add-on processors ...

... however, other Acorn computers (the Atom, the Electron and the ABC range) did not have such an interface.

So the Tube interface was not Acorn specific, but it was specific for the BBC range of computers.

... given that its predecessors ... did support them?

Of course any answer to your question can only be opinion-based.

However, on many internet sites I have read that Acorn advertised the Archimedes as "new generation home computer".

This means that Acorn did not see the Archimedes as successor of something already existing (like the BBC or the ABC) but as a completely different type of device.

Adding the Tube interface in the BBC made sense:

The BBC was designed as a device for beginners who wanted to learn programming.

In 1981 "professional programming" often meant "assembly language". So an engineer who has never used a computer before could buy a BBC model B, learn programming in general and then he could buy the 68000, 8088, 6809, Z80 ... card to learn the assembly language that was required for his work.

The expensive high-end Archimedes was definitely not intended for this purpose.

And in 1987 "professional programming" did not necessarily mean "assembly language" any more because the power of computers was enough to use compiler-based programming languages.

... and successors did support them?

There was a lot of software for non-ARM CPUs available on the market. The customers should be able to use this software.

The A1060 for the Amiga and the SunPCi for SUN workstations had the same purpose.

So the reason why only x86 CPUs were available as second CPU for the RISC PC is quite simple: In 1994 nearly all considerable software on the market was MS-DOS and Windows software.

However, if I understand the information about the ABC computers correctly, it was not intended that the user changed the CPUs in the ABC.

This is completely different to the BBC's Tube system where you were intended to exchange the second CPUs and/or simply to switch off the second CPU to use the main 6502 for programming.

Beginning with the ARM2 (used in the original Archimedes), ARM CPUs support up to 16 co-processors to be connected at the same time.

Many (later) ARM-based microcontrollers have the memory management and the debugging system implemented as co-processors.

I know (non-ARM) CPUs that have real-time control and/or security/encryption co-processors.

... that could be connected through it's Tube interface.

The actual Tube electronics is located in the second CPU's housing.

The second CPU had its own memory and the Tube system is not comparable to modern two-CPU system but it is more like two independent computers using a VNC or remote-desktop software.

If this is correct, it should be quite easy to connect a second CPU intended for the Acorn BBC to another home computer such as a C64, an A800, a Spectrum or ... an Archimedes (*)!

You would need special software, of course.

The original BBC Micro was designed very quickly and was subject to internal debate over its processor; the 6502 was already seven years old, and the tube appears to have been a compromise: they would ship the base machine with only a 6502 and could then experiment with the various newer processors on the market after the fact, demoting the 6502 to a mere IO processor. It allowed Acorn to evaluate the 32016, 68000, etc, on an existing design.

The RISC PC launched in 1994, when there was already a clear Windows hegemony forming — even in the UK. So it's likely that support for alternative processors was overt recognition of that.

Since neither of those reasons applies to the Archimedes, which launched in 1987 with the then-best consumer processor, it doesn't have explicit support for alternative processors.

Using their own Processor

In the 8-bit era, Acorn had used existing, off-the-shelf processors in their computers, predominantly the 6502. When designing the Acorn Proton (which later became the BBC Micro), the company were unsure whether to continue in that vein, or switch to a newer processor:

Where was Acorn to go next? Many possibilities were emerging with a new generation of 16-bit processors (like the 68000) set to come on to the market, and other developments, such as networking, gaining in importance.

Should Acorn abandon the 6502 processor which lay at the heart of all its machines? Should the next machine be full of the latest features or should it sacrifice advanced technology for the mass market?

After many lively meetings, the Acorn designers went away to work on Hauser's compromise suggestion, an improved 6502 machine with expansion possibilities. The 'Tube' was born to allow more sophisticated processors such as the 68000 to be added later. The new machine was to be called the Proton, continuing a trend born with the Atom.

This indecision that led to the Tube interface had another benefit: the possibility of using a Z80 processor was appealing to the BBC, as it would allow the machine to support CP/M, still considered important in business applications at the time.

When Acorn started planning a successor to the BBC Micro line, they once again looked at processor options, but this time they decided to design their own. Because the ARM processor was their own creation, individual employees' enthusiasm for using an alternative processor instead would be greatly reduced.

The ARM processor was very simple, and fast, for its time. This meant that software emulation of other platforms was a viable option.

From the release of RISC OS 2, the Archimedes was distributed with !65Host and !65Tube, two emulators that supported running BBC Micro and Master software natively under RISC OS (including Tube-compatible software). This provided backward compatibility with existing BBC software, without requiring a 6502 co-processor.

A PC Emulator was also released, emulating an 80186, and running MS-DOS 3.1, albeit somewhat slowly. Curiously, the linked article quotes an Acorn representative as saying "There'll be an 80186 co-processor card out for the Archimedes soon", indicating that they were considering a hardware-based solution too.

Competition was from DOS, not Windows

The Archimedes' RISC OS was a modern 32-bit operating system with a graphical user interface. Compare the promotional image of DOS 3.1 from the above article on the 80186 emulator: 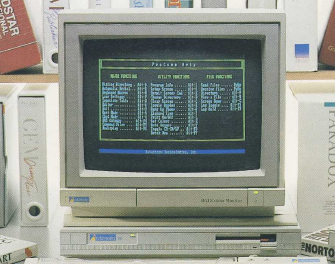 With a RISC OS desktop: 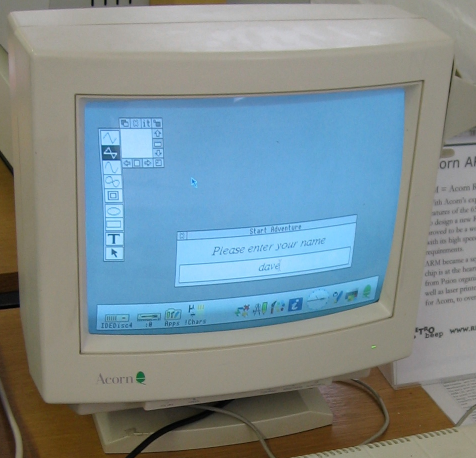 It would be quite reasonable to expect software developers of the late 1980s would be drawn to the ARM/RISC OS ecosystem rather than continue working under the antiquated constraints of the IBM PC and MS-DOS. If your machine is the best thing since sliced bread, why encourage people to keep using old-fashioned software?

By 1994, when the RISC PC was introduced, the MS-DOS/Windows hegemony was well established, and Windows 95 was just around the corner. The Archimedes line, while innovative, hadn't penetrated the market significantly (except the education sector). As a result, hardware compatibility with the PC platform was now essential, if the RISC PC was to succeed in the marketplace.

While there is no evidence that Acorn released a general-purpose co-processor, they did intend to (at one point).

A review of the Archimedes line, in the August 1987 issue of Personal Computer World magazine, includes the following statement:

So far Acorn has announced its intention to produce the following podules: 'Floating Point', a hardware floating point coprocessor; ' ROM', a card to hold ROM based applications, similar to the BBC sideways ROMs; 'BBC I/0', which reproduees the ports of the BBC B and Master, including DtoA and 1MHz bus; 'MIDI', the music synthesiser control; and '80186', which runs an MSDOS environment for IBM software.

Acorn had used the 80186 for an add-on second processor for the BBC Micro, and was sold built-in as part of the BBC Master 512.

In the absence of the 80186 for the Archimedes line, a third party manufacturer eventually stepped in. Aleph One released a number of PC Expansion cards based on 386 and 486 processors. One of these was reviewed by PC World in December 1992. (This would have been toward the end of the Archimedes' lifetime, a year and a half before the launch of the RISC PC.) They also released an expansion for the smaller A3000/A4000 machines (which did not have an internal podule bay).

It remains the case that Acorn didn't release their own add-on processor, leaving it to the aftermarket instead.

14
Why does my Acorn RiscPC display the POST boot error?
13
How long was the production run for the Acorn Electron?
8
Why isn't the approach to lower power CPUs guided by design rather than accident?
11
What role did the BBC have in the development and marketing of Acorn Archimedes computers?