What was this menu application in DOS?

My father's computer in the early 90s (probably 1991, or at the latest 1992) had a piece of software that acted as an application launcher. I think it was simply called "menu".

Its graphics were simple text-based ones, with all borders drawn as characters such as full block (similarly to classic DOS software like QBASIC and LOTUS 1-2-3).

The application simply displayed a 3x3 grid of white rectangles, and each had the name of a program in it. Pressing a function key (F1-F9) would launch the corresponding software, and page up/down switched "pages" (groups of 9 applications).

Other keys were used to edit which application corresponded to each rectangle, probably with the path to an executable and a display name.

Once an application was launched an exited, it would simply drop back to a command line. I think the command to make the menu appear again was simply menu.This was definitely not run on Windows, simply MS-DOS.

I've tried a few searches but I couldn't find any reference to such a launcher. Given the simplicity, I think it's entirely possible that a programmer friend of my father had made it for us, but I'd like to be sure.

There were a number of menu builders for DOS such as MenuWorks and PowerMenu. Here is a 1988 article that reviews some others.

I think I know what software you're talking about. I picked up an IBM PC AT off of eBay about a year ago, and the hard drive worked perfectly fine. When I first booted the machine, I was greeted with a text-based menu software, looking like this (I took this photo long after I restored the computer): 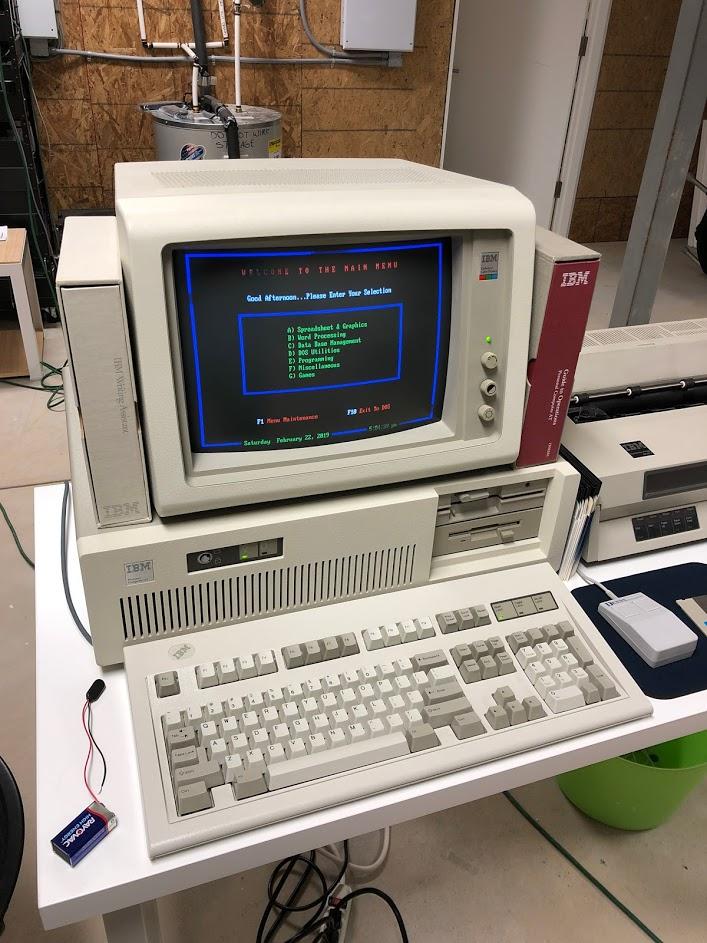 After a quick Google search of the company and software, which I have forgotten the name of, all I could find was a Google Books copy of a magazine from the 80's briefly mentioning the release of the software. As far as I know, I'm one of the only people with a copy of the software, named "menu.exe". I hope this is what you were looking for.

Edit: After looking through the magazine linked in snips-n-snails' answer, I found a picture of the software, made by Direct Access.

I believe the first official TUI (Text User Interface) file manager for DOS was DOS Shell, first distributed as part of MS-DOS and PC DOS v4.0 (1988). Microsoft eventually dropped it from its distributions (though it would still function), probably as a small incentive to MS-DOS users to add an early version of Windows instead. I believe PC DOS kept it thru its final version (7.x).

(Note that until 1993, with MS-DOS 6.0 and PC DOS 6.1, they were essentially differently-branded versions of the same software. After that, there was still a lot of commonality. Immediate differences included Microsoft's dropping of DOS Shell, IBM's dropping of QBASIC and adding the superior E editor instead. (The Microsoft editor had been QBASIC with a different skin.) PC DOS 7 added IBM's own Rexx language to re-offer a programming language to its distribution.)

Not the answer you're looking for? Browse other questions tagged ms-dos identify-this-software or ask your own question.

33
Where and what was Haunt.bat? A game pre-loaded on a c1992 PC
7
An old DOS application that allowed to create cards, posters, invitations, etc
7
How do I create a boot menu to select between Windows and DOS?
17
Name this PC DOS Combat Flight Simulator
6
What was the first third-party commercial application for MS-DOS?
28
What is this programming language having PROC, DCL, LABEL keywords?
3
What is the *BEAST* event-recording software grammar?
9
What was this OS / Application on a 80286?