Not sure if this exactly fits here, but I’m interested in the history of word “console” in game consoles and in computing in general.

I can see at least two usages for the term, which at least superficially seem rather unrelated:

When, how and why game consoles are called consoles?

PS not native English speaker, so forgive me if I miss some implicit semantics of this word

A console is a piece of furniture. Originally only meant to describe a kind of writing desk to stand up to, usually with a tilted surface.

The use of the term "console" in reference to home video game systems arose because of the association of these systems with TV's in the U.S.

At the time these systems were gaining popular acceptance in the 1980s, most U.S. homes had a single main/larger TV that existed as a piece of furniture in the Living Room or Family Room. These were commonly referred to as "console TV's", and were usually 25 inch diagonal CRT's surrounded by a wooden cabinet and including speakers. It served as a traditional piece of console furniture by virtue of its large, flat, top surface. Photos, vases, and other decorative items were typically found atop these TV's, before gradually being replaced by video components, such as VCR's and video game systems as such technologies were popularized.

The whole apparatus was commonly called the console, and this gradually led to terms like "video game system", or "video game module" being replaced with the more casual reference to a "game console". 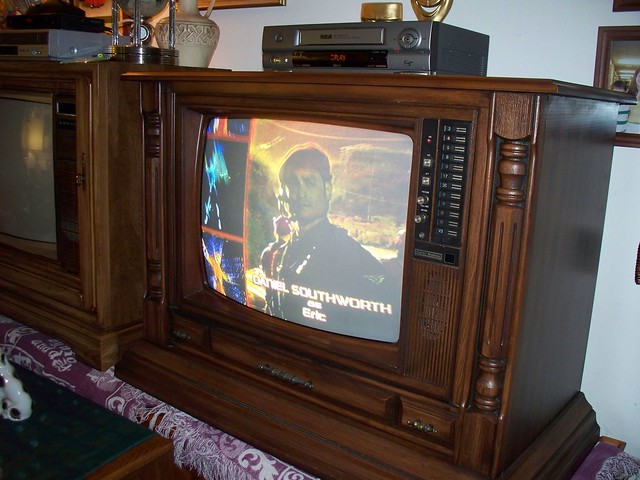 I've recently done some research on the Magnavox Odyssey, the world's first video game console, and it appears that the term "console" was never used for it during development or when it was brought to market in 1972.

Looking at the early marketing materials, it appears to have first been seen by the public on the TV show What's my Line in a programme recorded on August 24th, 1972, where the main unit is referred to as a "master control unit." This terminology is also used in the 1972 8 mm promotional film used in dealer showrooms. The first 1972 commercial doesn't even go this far, calling it just an "electronic game simulator." This 1973 print advertisement includes a section on the Odyssey where they not only don't refer to it as a "console," but use "color TV consoles" to refer to, clearly, televisions (and also stereo systems).

In the 2005 book Videogames: In the Beginning by Ralph Bear (the inventor of the Odyssey) he refers to the Odyssey and other early systems (such as the Coleco Telestar) as "consoles," but this appears to be an achronistic use. P. 60 of the book reproduces a memo he wrote on 3/30/71 about a meeting with Magnavox where the main unit is referred to as an "electronics box."

The memo also says one of the people attending the meeting was "Gerry Martin VP, Console Product Dev't," who was basically the one responsible for licensing the original "brown box" from Sanders Associates for Magnavox to redesign and market. On p. 59 Bear writes (in 2005):

For Magnavox, there was Gerald G. Martin. As the V.P. for Console Products Planning, it was he who had taken the lead to bring TV games into his product line.

I don't know if that has anything to do with the "electronics unit" eventually and retroactively being termed a "console," though.

Not the answer you're looking for? Browse other questions tagged history game-consoles or ask your own question.

11
What was the difference between a Games Console and a Home Computer?