Classilla on SheepShaver for Windows

I am trying to install Classilla, an open-source browser for Mac OS9, on SheepShaver for Windows. In SheepShaverGui.exe, I have the Enable "My Computer" icon checked.

I open up SheepShaver and go to the directory where I have the Classilla folder, and when I try to open it, I get this error. 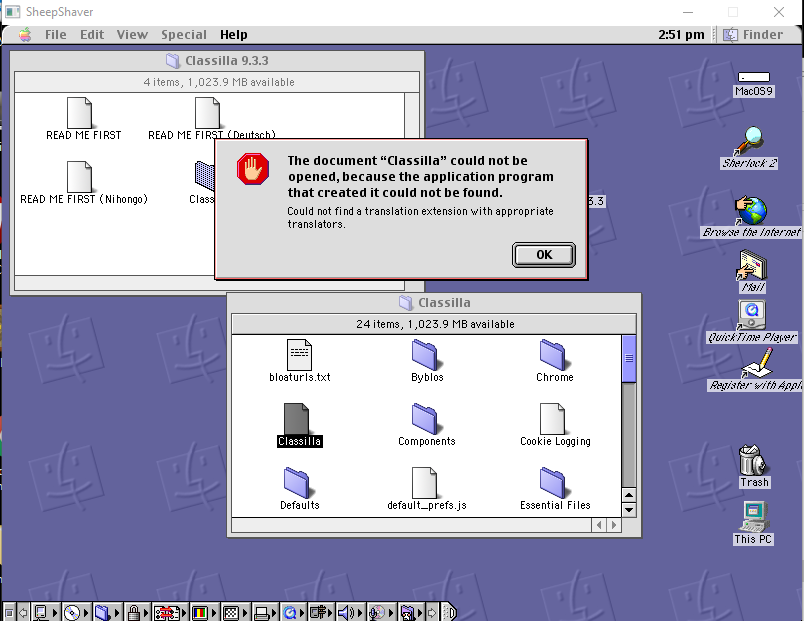 Usually when you see that message is because the metadata for the file isn't set correctly; this is typical if you're looking at MacOS Classic files that are not on a HFS filesystem.

Unlike Windows or UNIX or most other operating systems that I've used over the years, MacOS tends to pack quite a bit of data into a single apparent file; there is a separation from the actual application code from "resources" such as icons, sounds, etc. How this was achieved on MacOS was the HFS filesystem would split every file into resource (e.g. icons) and data forks (e.g. code). This detail is well hidden from users (as was the intent) and not readily visible as there was no official command line for the Mac and thus it was harder to poke around to find.

Along with the two forks, the MacOS also had a bit more intelligence about what files were and what application was needed to run them. This feature was achieved by every file indicating a type and a creator. The idea was that if you had a word processor document on a disk, the file could tell the computer that it needed (say) Microsoft Word to open/edit the file. As such, when you installed an application, it registered itself with the OS to indicate that it could handle files with a particular signature. While this would appear frustrating to more hardcode computer users, it did make things a bit easier for the novice. Windows achieved this with file extensions (e.g. .doc, .xls, etc.), but that was easier to fix since you could just rename the file.

But what about applications? Their type was APPL which told the MacOS that it was an application and attempt to load and execute the file directly.

So How Do I Get This To Run?

Hopefully the resource fork is still preserved in your Classilla application (usually a hidden directory when MacOS was mounting a non-HFS filesystem). But ignoring that, it is probably just that somehow the Type and Creator of your application is corrupt or missing. It should be APPL and MOZZ, respectively. The only way that I'm aware of how to change these fields is to use ResEdit which was a tool from Apple to tweak all those hidden bits of HFS files.

That should at least get it to be recognized as an application. Now if the resource fork is missing, it may still work, but no guarantees. Re-download!

It looks like the Classilla folder opened OK and that you're opening a document which you don't have the original app which created it. Try opening an editor or wordprocessing app and then open the file from within that app. If it opens and looks like garbage data, try opening it in a hex editor instead.

Not the answer you're looking for? Browse other questions tagged emulation mac-os-classic sheepshaver hfs or ask your own question.