Was the Music System for the Exidy Sorcerer as exceptional as I remember?

I am trying to remember about a bare-board sound card which plugged into the parallel port of an Exidy Sorcerer (circa 1980). The card and software ("Music System") was made by Arrington Software Service in Boise, Idaho. It had no speaker, so it needed to be plugged into an amplifier and speaker. (Your home music system would work if it had an input jack.) One could enter the 4-voice song from sheet music, or you could buy pre-compiled digital music libraries. Note that the system was polyphonic, but not stereo.

Unfortunately I don't have either my Sorcerer or the sound card anymore. I'd like to know what D/A converter the latter used. Maybe I was just ignorant, but I don't remember any other such system, with both 4 voices and the ability to type in sheet music. The editor literally looked like part of a page of sheet music.

Did other systems of the era have these features?

... scavenged around and found Mr. Arrington's 1980 brochure in a cabinet. Quoted extract:

HARDWARE -- Assembled A/D converter connects to parallel port. Simply connect an amplifier to your stereo to listen to music. ...

EDITOR -- System includes a screen editor that displays the two musical staves upon which musical notes are placed. ...

It cost $40 (which today would probably be about $150). An optional entertainment add-on called Piano Player cost $15. It showed a man seated at a piano, playing it. His motions reacted to the music being played. !! See image in exidyboy's answer. I obviously remembered it wrong.

Having looked into my best guess of where a competing product might be found in the same timeframe, the Apple II, the ever-questionable source of Wikipedia offers:

[The Music Card MC16] was the first hardware music product sold for the Apple II ... demonstrated to Apple and Apple dealers late in 1978, and volume sales began in June 1979.

The sophisticated software written by John Ridges for this synthesizer was the first to implement graphical entry for a personal computer music product. [...] Since the Apple II had no mouse, the GUI was implemented using the Apple's "game paddles"; one moved an arrow to select the desired icon, and the other moved the selected icon to the desired position on the musical staff on the screen display. When entering a musical note, the sound of the note was simultaneously played by the synthesizer for confirmation that the correct pitch had been selected.

Each card could produce three simultaneous voices, each with an 8 octave range (starting at the same pitch as a piano but extending 8 semitones higher) with excellent tuning accuracy (within 2 cents) and 256 envelope/volume levels with an exponential scaling (78 dB range). Each voice could also produce quarter tones (pitches exponentially halfway between each piano pitch). Two cards could be used for six voices or three cards for nine voices; with two or three cards the audio output was in stereo.

The related screenshot is: 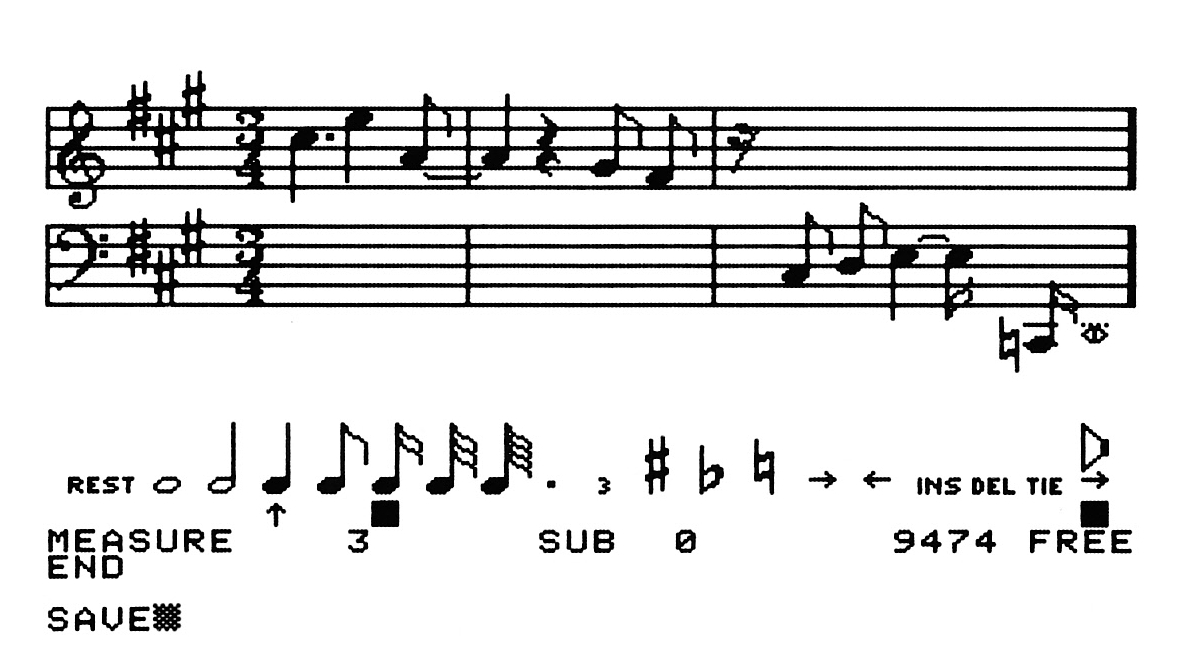 The entire article also covers earlier S100 hardware from the same company that was more sonically capable, but unsurprisingly limited in terms of the user interface.

So to answer your question — "Did other systems of the era have these features?" — the Apple II had something similar a year earlier, but only three voices rather than four (unless you bought multiple cards).

I'd also distinguish this and the Exidy product from the game-oriented Pokey/SN/AY-type chips of the era as they seem to have put a lot of thought into pitch control rather than just thrown a variable clock divider at it and let the [non-linear] range fall where it may, so I didn't look seriously at the Atari 8-bit but I dare imagine that may have had some sort of composition software by 1980.

Recovered a few weeks ago from some Sorcerer floppies.

Not the answer you're looking for? Browse other questions tagged sound exidy-sorcerer or ask your own question.

11
What format was used for Exidy Sorcerer cassette tapes?
11
What is that Slot on the Bottom of an Exidy Sorcerer
3
Exidy Sorcerer: how can I load a program from cassette whilst within CP/M?
3
Why didn't Famicom games use the Konami SCC for expansion audio?
8
Was the output of the C64 SID chip 8 bit sound?
8
Getting Music Functioning for Raptor: Call of the Shadows (1994)
6
What was the first PC/computer to have sound recording & playback support?
3
Is there any documentation for programming Microsoft Windows Sound System sound cards?