The desktop was handled oddly in Classic Mac OS. Every non-removable drive had its own Desktop Folder, and the contents of those folders from every mounted disk were displayed together on the desktop. By default, dragging a file from any disk to the desktop would attempt to move it to that drive's Desktop Folder, rather than copying it to another disk.

From what you're describing, it sounds like the "My PC" drive is treated as a local drive, but it is either read-only, or cannot have a Desktop Folder created.

As a workaround, create a folder on the desktop -- by default, this will be created on your startup disk -- then drag your file into that folder to copy it to that disk. Once you've copied the file, you can move it back out to the desktop if you so desire.

See if it makes a difference by right-clicking on your folder in Windows and click on "Properties", then un-check the "Read-only" attribute. 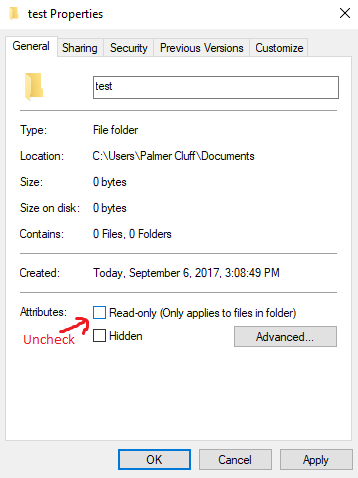 Or alternatively, reset the attributes from a command prompt replacing "?" with your drive letter and "folder name" with your folder name.

2
SheepShaver - cdenable.sys on 64-bit
1
SheepShaver won't open after reboot
6
Classilla on SheepShaver for Windows
7
SheepShaver failing to install application; Not Enough Memory
10
Trying to build First Mozilla Release (Netscape 5)
10
Understanding the DMK disk image file format used by TRS-80 emulators
2
How do I slow down the emulation in VMware and make it go "proper fullscreen" for Windows 3.11?
5
Running WarpCopy64 on an emulator
15
Running CP/M on my own Intel 8080 emulator