I have a C64 that has recently stopped responding to two 'columns' of keys, namely '9,0' 'i,o' 'j,k' and 'n,m' - I've swapped the CIA chips (U1 and U2) to no effect, so I pulled a keyboard from a spare C64 and tried it and it worked perfectly. This leads me to conclude there is something wrong with the actual keyboard.

I found this document: Commodore 64 keyboard connector and keyboard matrix and it appears all the keys I am having difficulty with are related to (I think) Port A Bit 4, which is pin 16 on the keyboard header.

Note, While obviously highly related, I don't think this question is a duplicate of Commodore 64 with partly working keyboard because that question was answered by swapping the CIA chips and does not provide any troubleshooting guidance beyond a bad CIA and/or inspecting the keyboard header.

There are no active electronics in the keyboard: it's just membrane switches. So yes, you should desolder the shift-lock key, take it apart, and start investigating with a continuity tester.

The key membrane switches themselves do become dirty and are worth cleaning with 99% isopropyl alcohol if you have the keyboard apart anyway, but given that specific columns are your issue, it's likely not the key contacts themselves.

Jan Beta has a video, Cleaning and fixing a C64C Keyboard, which you may find helpful to see how to take it apart. (The C64C keyboard is pretty much the same as the C64.) Also, bwack's video C64 Keyboard restoration. Revive key response shows a neat little jig that lets you easily test all the keys on a keyboard directly using a continuity tester, without it being plugged into the computer.

By the way, if you're looking for further information on the keyboard subsystem beyond what you've already found, you can find extracts from and links to the Commodore service manual and keyboard page of the C64 wiki in this answer.

I'm posting the result of troubleshooting and fixing my broken keyboard in the hope it might help others. However, I am accepting Curts answer as the solution because he responded first and his advice confirmed there were no active electronics to worry about in the keyboard itself, and his linked information helped me to understand how to interpret the keyboard matrix to properly ring out the keyboard PCB. I'd also like to thank Tofro for his answer which I also found helpful.

After disassembling the keyboard and visually examining the PCB, I was able to spot quite a bit of corrosion in all the traces coming from where the keyboard harness wires are soldiered to the PCB. I suspect a certain careless 15 year old probably left a nice thumbprint covered in pizza grease here sometime in the 1980's...

I knew from the keyboard matrix that the keys giving me problems were all related to Port A Bit 4, which is pin 16 on the header - so I started by testing continuity from the female keyboard connector to the soldier point labeled 'E' on the PCB. Indeed this rang out without any problem.

Next I tried tracing further into the PCB by checking for continuity between point 'E' and the first exposed keypad contact, which did NOT work. This seemed to indicate the problem existed in the trace just after point 'E', but before the keypad - which correlated with the noted corrosion.

Here is a picture of point 'E', the first keypad and the corrosion: 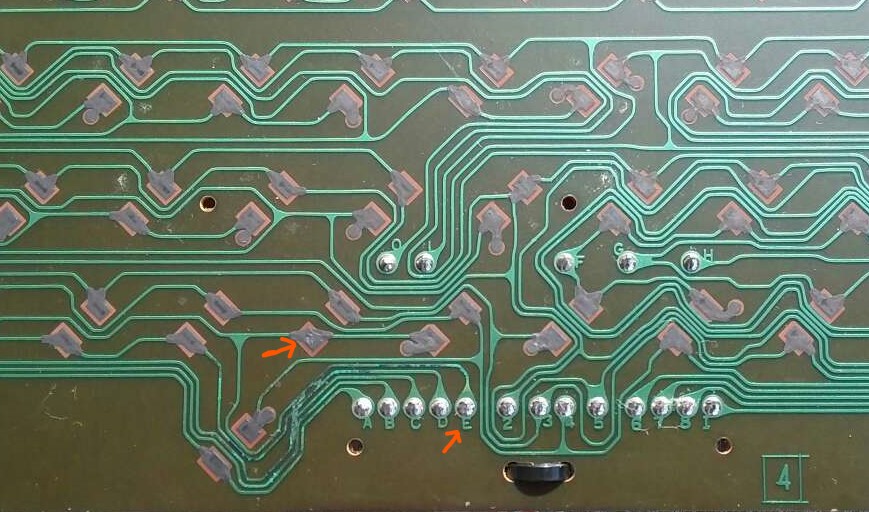 I decided the easiest way to fix this would be to tack a short wire between point 'E' and the 'Y' shaped part of the trace past the corroded area. To accomplish this I first drilled two small through-holes in the PCB beside point 'E' and the 'Y' junction. Next, I then removed the green coating on the 'Y' junction by gently scraping the area with a sharp Exacto knife to expose the bare copper. Finally, I routed a piece of copper wire through the hold I drilled and soldiered it as neatly as I could.

Here is the trace side of the PCB: 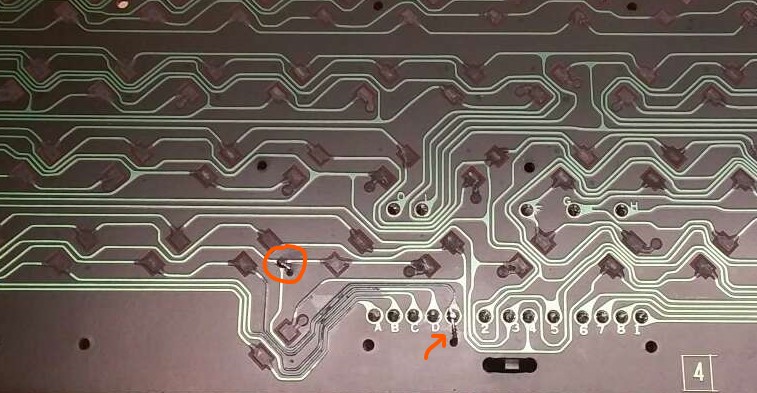 With the wire routed on the outside of the board: 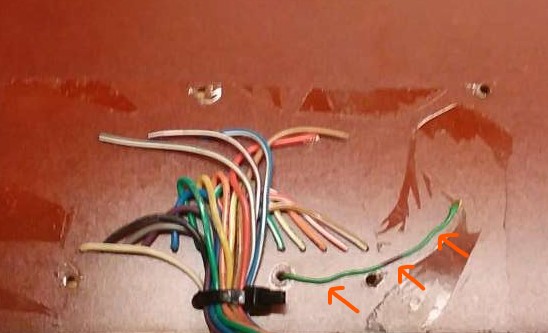 I re-assembled the keyboard and connected it back to my C-64. A quick test revealed all keys are now functioning normally again. I'm a bit concerned about the corrosion in that area, as it may cause future problems with other traces. I guess time will tell.

Not the answer you're looking for? Browse other questions tagged commodore-64 commodore keyboards or ask your own question.

8
Commodore 64 with partly working keyboard
12
Troubleshooting and reparing an Atari 800XL with a single key not working
54
Why did Commodore fill their power supplies with epoxy?
11
Possible cause for C128 A/V output containing faintly coloured columns and failing shortly after?
10
Did any devices use the Commodore 64 joystick ports as outputs or two-way communications ports?
5
What were Commodore's keyboard layouts before the VIC-20?
22
How does the C64 get an accurate TOD clock on both 60 Hz and 50 Hz power?
3
Which Commodore CDTV models came with keyboard with grey caps
1
Part number / model for IBM PC 350 keyboard
3
PS/2 Keyboard not working on Windows 95 and MS-DOS