How did the Altair 8800 front panel load the program counter?

My understanding is that when you toggle in an address on the Altair 8800 front panel switches and then press the EXAMINE switch, it loads the program counter with that address, or at any rate does something so that you can then press SINGLE STEP or RUN to start executing the instruction at that address.

How exactly does it load the program counter, given that there's no obvious way to tell the CPU to do this without excecuting instructions to do so? Does it actually put instructions on the bus and get the CPU to execute them? Or is there some other clever trick?

References to schematics are welcome; if you can provide additional information on exactly how the circuits work, that's even better.

A Note on the Answers:

I've accepted 比尔盖子's answer because after (slowly) walking through it in conjunction with the full schematic page I understood just how the data bus was being manipulated, which is the level of detail I was personally looking for. (His schematic excerpts really helped to make sure I was focusing on the right parts for each step.) But if you just want a more general description, or want an overview before diving into the details, you may want to read the other answers before the accepted one.

Just about a week ago, I encountered the same question as I was thinking about the idea of building a front panel for my homebrew computer, but I didn't understand how could one "move" the CPU to execute code at an user-specified address without affecting other components such as the content inside the RAM, I even searched at RC.SE! And so, I decided to take a look at Altair 8800. As I'm a bit late for the question, I'll just post some details from page 25 of the schematics to show the additional information.

The circuitry was surprisingly simple and clever. 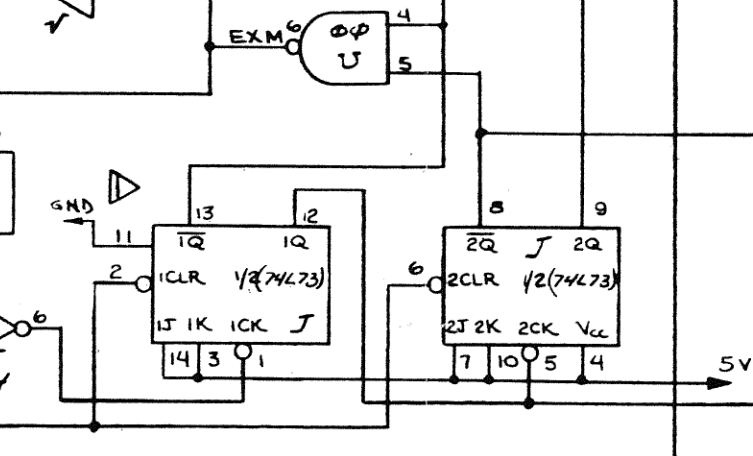 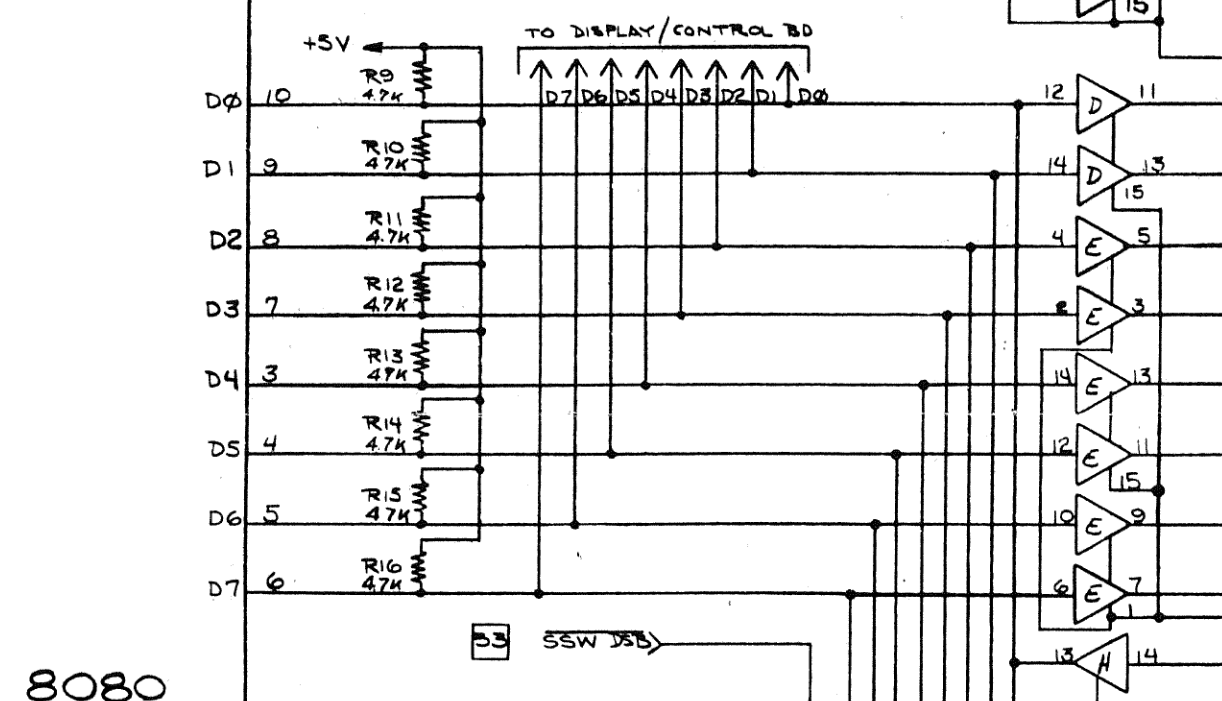 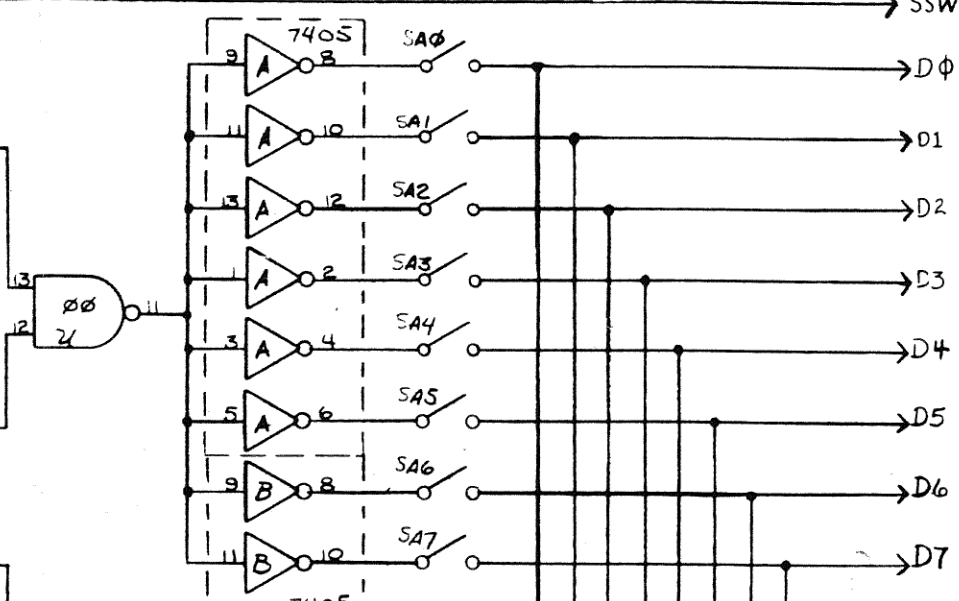 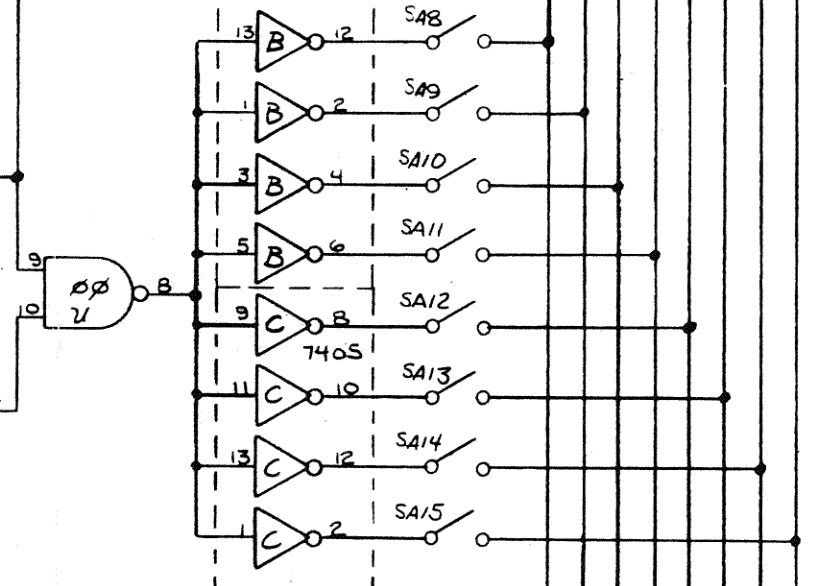 Appendix I: How does Altair 8800 avoid bus conflicts?

Cautious readers would immediately notice a critical problem: The RAM is not disabled while we're injecting instructions to the data bus! It means, the RAM would also respond and start outputting data simultaneously, creating a bus contention.

How does Altair 8800 avoid this problem? First of all, it's important to notice that our code injection circuitry and the toggle switches from the front panel are not connected to the demultiplexed, buffered "normal" data bus, instead, it is connected directly to Intel 8080's bidirectional "raw" data bus, see page 24. The key to our success is this part of the circuitry, which is connected to pin 1 of the 8T97 buffer, responsible for enabling/disabling the input buffer.

It will enable the input buffer and allow the data to flow towards the CPU, only if the following conditions are met (see page 4).

When the front panel is used for examining the memory, the RUN/STOP switch is flipped to STOP. As a result, the Condition (2) is unsatisfied, the input buffers are disabled, effectively isolating the CPU from all RAM and I/O ports, leaving only the pull-up resistors and our front panel. Therefore, the bus contention problem is avoided without disabling the RAM explicitly.

Meanwhile, the RAM is not disabled for a good reason: we need to inspect them. To do this, indicator lights are simply connected to the "normal" bus lines (DI_0-7). 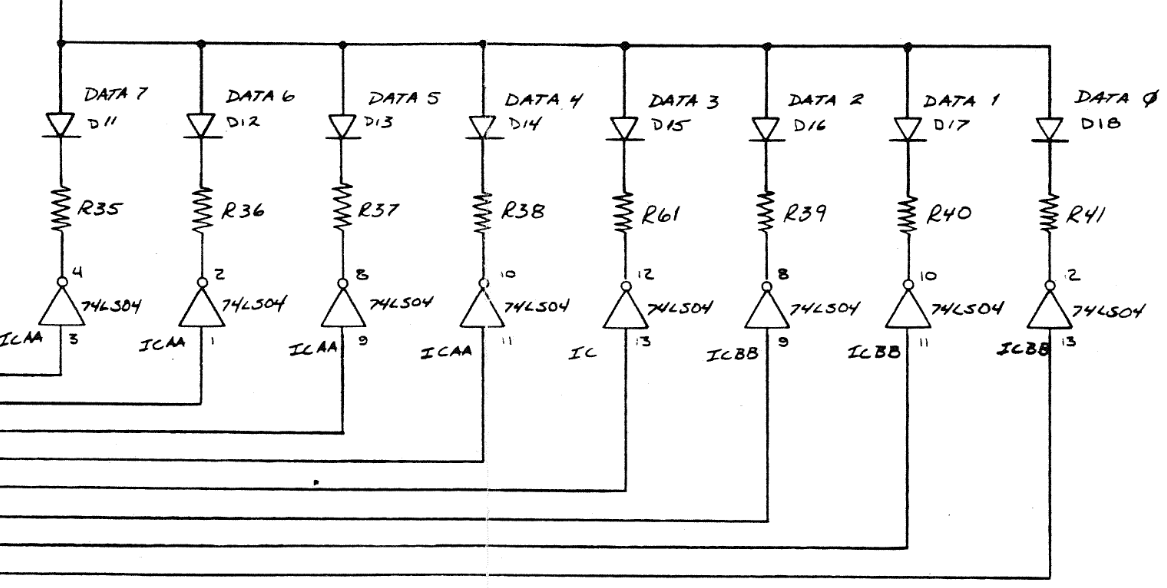 Using this simple circuit design and a minimum number of components, we hit three birds with one stone. This design is not without its limitation, which helped to explain the reason behind two oddities on the Altair 8800: (1) "EXAMINE" also modifies PC, (2) The indicator lights only shows input, not output.

The designers in Ed Roberts's company must have put great effort to reduce the cost and complexity of the Altair 8800 system.

Appendix II: What is /SSW DSB?

As you see, pulling the signal /SSW DSB to ground will disable the input buffers as well. Why don't we use this signal? What is it?

The Altair 8800 has a special input port, 0xFF, which is the current position of the sense switch. As I mentioned, toggle switches are connected directly to the raw, unbuffered 8080 data bus. If we want to read the input from the sense switch, the input buffer must be switched off. The /SSW DSB is used for this purpose. Signal /SSW DSB is generated to switch off the input buffer, when...

How exactly does it load the program counter, given that there's no obvious way to tell the CPU to do this without excecuting instructions to do so?

Does it actually put instructions on the bus and get the CPU to execute them?

That's exactly what is done: Let the CPU jump to that address.

In case of 'EXAMINE' the front panel injects a jump to set the desired address. When presses, a JMP (opcode 11 000 011) is inserted, followed by the two address bytes and one cycle to halt the CPU again. All orchestrated by a little sequencer build from the two flip-flops of a 7473.

'DEPOSIT' issues a single memory write cycle without having the CPU do anything, while 'DEPOSIT NEXT' does the same plus triggering the NOP execution of 'EXAMINE NEXT' after that.

Or is there some other clever trick?

The basic trick is the same as with Sinclair's ZX80 Video access (which itself is an application of the 'Cheap Video' circuit) and others. Except operating in stop motion :))

The IMSAI 8080 front panel seems to be nearly identical to the Altair 8800 front panel.¹ I just stumbled across a 1999 document, IMSAI CPA Front Panel Control Board, that gives an excellent description of how this works:

The EXAMINE NEXT and DEPOSIT NEXT switches use similar schemes and the NO-OP (hex 00 or octal 000) instruction to increment the address. Much of the remaining logic of the CP-A is used to sequence these commands to provide the desired functions. The RUN/STOP flip-flop line, the SINGLE STEP line, the EXAMINE line, and the EXAMINE NEXT-line are all input to an OR-gate controlling the X-READY line. (The X-READY line must be high for the processor to run its function is identical to the P-READY line used by the memory and I/O boards. The X-READY line is reserved for use of the front panel to avoid conflicts of two gates driving the same backplane line). During each of these functions, the processor is permitted to execute an instruction, and then is stopped in the next cycle in a manner similar to the RUN/STOP flip-flop cycle described earlier

The EXAMINE-NEXT flip-flop is similarly controlled by the leading edge of a pulse from a one-shot driven by either the DEPOSIT NEXT or EXAMINE NEXT switch. The output of the flip-flop is used both to put the NO-OP (hex 00 or octal 000) onto the bi-directional data bus, and also to provide the READY signal so that the processor will execute the instruction. It is reset by the sync pulse on the following cycle, thus stopping the processor again.

The document goes on to explain EXAMINE and DEPOSIT in similar detail, including the use of a gating to ensure that the MPU board is not trying to drive the data bus while the front panel is using it to write to memory.

Unrelated to this, the document also explains the EXT. CLR. (CLR on the Altair) switch, which sends a reset signal to everything but the processor, which I had been wondering about.

¹ The Altair's interrupt acknowledge light, INT, is called INTA on the IMSAI. The WO light (write/output cycle) on the earlier Altair front panels was actually negative logic; this is correctly labeled W̅O̅ on the IMSAI. The PROT light and PROTECT/UNPROTECT switches don't exist on the IMSAI, but most Altair memory boards didn't support the protect feature anyway. The IMSAI adds RUN, WAIT and HOLD lights that don't exist on the Altair, as well as the PROGRAMMED OUTPUT lights displaying whatever was written to the latch on port FFh. All switches appear identical in both designation and operation. Much of the information in this note came from deramp5113's Altair 8800 Video #4 - Front Panel Status Lights and Video #5 - Interrupt Acknowledge Cycle.

Not the answer you're looking for? Browse other questions tagged altair-8800 front-panel or ask your own question.

22
Identify this front panel
4
Source code of front-panel entered Altair 8800 programs
6
Single-stepping the Altair 8800
1
Where can I find and download emulator of Altair 8800 with Intel 8080 processor for Windows?
9
Why did 1970s front panels prefer momentary toggle switches to push buttons?
11
What additional hardware was required for BASIC on an Altair 8800?