What method does the game Tau Ceti use to spell-check its commands?

This was originally going to be an identify-this-game question but I found the game I was looking for!

I played Tau Ceti when I was a kid and I remember being amazed by how it would accept spelling mistakes in the typed commands. For example, if you type LUNCH it launches the skimmer. If a word was too different from any keywords it would say NOT UNDERSTOOD.

What method does it use to spell-check the user's commands? Is it the Levenshtein Distance or something else? 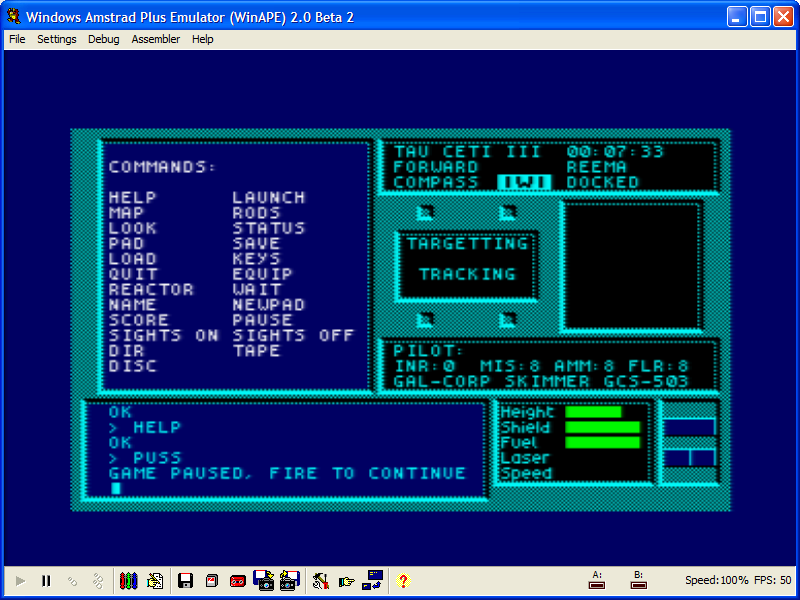 It's not a Soundex because LOOD and LOAK both do LOOK, and LAD does PAD. Swapping two letters in a four letter command always results in NOT UNDERSTOOD, but any one missing letter or an extra letter still allows the command to be understood. NEWPANDA does NEWPAD but NEWTPANDA is too different and is NOT UNDERSTOOD.

There's another version I found online, but it's the DOS version. In that version, it only used the first three letters.

Typing JOYOUS CELEBRATION would be understood as JOYSTICK.

The DOS version, however, is different than the CPC version.

While the source needs to be analyzed to get the actual algorithm (I think they rolled their own), it is possible to analyze the behaviors to get a better understanding. (Clicking the pause button in the lower left brings up something. I haven't been able to actually get anything meaningful from it however.)

This strange behavior can be triggered in longer words if there is another mistake. For example XTATU is fine, but TTATU fails.

(I suspect these two anomalies are bugs, but they do give insight into how it works.)

Working from your image, I found that PUSS, and PUS pause the game. It seems that it is possible to omit two characters from a word of 5 or more letters if no extra characters are added, and each letter is no more than 1 place away from its original position.

Again, the behavior of longer words shows that letters that are slightly misplaced are more often understood than random letters. For example, E=ACTOR is understood, but MMACTOR is not.

Another strange fact is that leading spaces are ignored, but trailing (and inter-word) spaces are not. When they are not ignored, they are counted as any other wrong character is. That means ␠␠␠␠␠␠␠PAD is recognized, but PAD␠␠ and P␠A␠D are not. Like POD, P␠D will pass. Omitting a space (in SIGHTS ON or SIGHTS OFF) counts as a wrong character.

It is interesting to note that SIGHTS and SIGHTS␠ are accepted, but SIGHTS␠␠ is not.

Periods are strange; . is understood as HELP, L. is understood as LAUNCH. I think . is like a wildcard, and the list seems to be scanned left to right top to bottom (RODS before REACTOR). Note that it ignores anything after the first .; .MAP is the same as HELP.

Another interesting thing I noticed is that SIGHTS ONF,SIGHTS O, and SIGHTS OF are accepted as commands. I think they all may map to SIGHTS ON, but I have no clue how to check that.

Without having the source code, it is obviously a bit hard to judge, but let's have a shot at it. There are various possibilities to "guess what the player meant":

Not the answer you're looking for? Browse other questions tagged cpc or ask your own question.