Are there standard DIN pinouts for cassette and video ports on early Japanese 8-bit computers?

I have several different Japanese 8-bit computers, and they use similar DIN connectors for video and cassette I/O:

These are just ones I have examined myself; I have seen various other examples on the net that look as if they also output the above signals out the same jacks.

Is there a common (even if informal) standard for any or all of these, or do Japanese 8-bit computers frequently use the same 5-pin and 8-pin DIN connectors for these signals but with different pinouts?

I am interested just in the signals listed above: cassette audio, composite video and TTL (digital) video. (I believe that would restrict this mainly to pre-MSX and MSX1 computers.) Standards for the monitor side of the connection or analogue RGB signals outside the scope of this question, unless they have a direct bearing on the connectors/signals above.

[This is a community wiki post. However, if you don't have enough reputation to edit it, or just don't feel like doing the work, feel free to post a comment on it linking to the source of a pinout that's not yet here and I will add it to the post --cjs.]

The page OLD Hard 旧機種情報 >>Connecter Infomation ケーブル情報 (Japanese) has a lot of information on various cables for Japanese computers, including a summary table at the bottom of that page covering CRT, keyboard, mouse, CMT (cassette), FDD and power (電源) connectors for 36 different computers. This information should be integrated into what's below.

This won't help with determining if there are any formal standards, but we can at least figure out if there are informal/accidental standards by looking at actual machines. MSX1 seems to be fairly consistent (excepting analogue RGB, which we're not covering here), so between that and the pre-MSX computers there aren't all that many of them. The listings below are in approximately chronological order of release.

In this answer we use the standard pin numbering, below looking in to the female jack on the computer. Note that some refrences are different, in particular some that give a numbering marked "male" are actually looking at the side of the connector you solder, which gives the same numbering as below. But check the reference carefully!

The critical signals to make the interface work are in CAPS below; "extra" signals that shouldn't harm operation if left unconnected are in lower-case.

Verdict so far: two standards, one for non-MSX, one for MSX.

Is there a common (even if informal) standard for these,

No, it has been different from the begining. Not even the ubiquitous MSX standard could establish a unified connector and even less a pinout.

In later years SCART/JP21 established a common use by market force, as it became a standard for TV sets in Japan and large parts of Asia. Still, compatibility was often reached by supplying a cable to connect a computers proprietary plug to JP21 required by standard monitors/TVs.

or do Japanese 8-bit computers frequently use the same 5-pin and 8-pin DIN connectors with different pinouts?

Mechanical it's down to two main connectors.

With the DIN next to all manufacturers had their own pinout. Some even changed between machines like Panasonic did. They not only differ in signals present (RGB or YUV, sync on green, separate sync, combined sync, ...), but as well in where they are placed (FM-X got +12V on pin 1, while Sanyo puts blue on 1).

The situation changed a bit after Japan adopted their version of SCART with the TTC-3/CPE-1201 standard. In Japan and Korea it's usually called/labeled RGB-21, while outside (Europe at least) JP-21 is the common name. While using the 21 pin SCART connector, the signal assignment is complete different.

De facto standardisation on the monitor/TV side happened in the mid 1980s, when Japanese (and later Korean) by default offered RGB (and later S-Video) input via JP21 connectors. In the late 1980s next to every Japanese home computer was sold either with a proprietary to JP21 cable, or newer machines already had JP21 build in, so standard cables could be used.

Note, that his is only true for machines for Asian markets. Units designated for Europe (like Sony HB-G900) had fully SCART compatible connectors on the back.

Bottom Line: JP-21 may be the closest answer here. It did, beginning in the mid 1980s, clean up the CRT side, but only in part replaced proprietary connectors on the console side. And it's not a DIN either.

There's a seller on Yahoo Auctions in Japan named michael_torojirou who makes cables for pre-90s computers. Over the last several years has sold a lot (several thousand, from the looks of it) of them with consistently good feedback, so it's likely that they work.

From his offerings for cables that connect 8-pin DIN digital RGB outputs to various kinds of monitors, we can see that the same cable is used for a wide variety of computers, indicating that these outputs are fairly standardized, even beyond the early 8-bit computers and MSX1.

MZ/PC-8801/8001/6001/6601/FM-7 to "RGB21" (i.e., the JP-21 variant of SCART). There's obviously digital-to-analogue RGB conversion circuitry in this cable because most of the computers he discusses have only digital outputs, and he's tested it with an analogue RGB display (Sanyo CMT-A14F1G) and several up/down-scalers. He lists this as usable with:

He goes on to say that this is supposed to work with (I guess some) MSX2 computers and game consoles as well.

So it seems that there is a fairly standard pinout for digital RGB on 8-pin DIN connectors for early Japanese 8-bit computers.

I'm not sure if this is the right place to to mention this, but I confirm the outputs mentioned in the question (and reverse-engineer ones I'm not sure of) with this breakout DIN connector that I made: 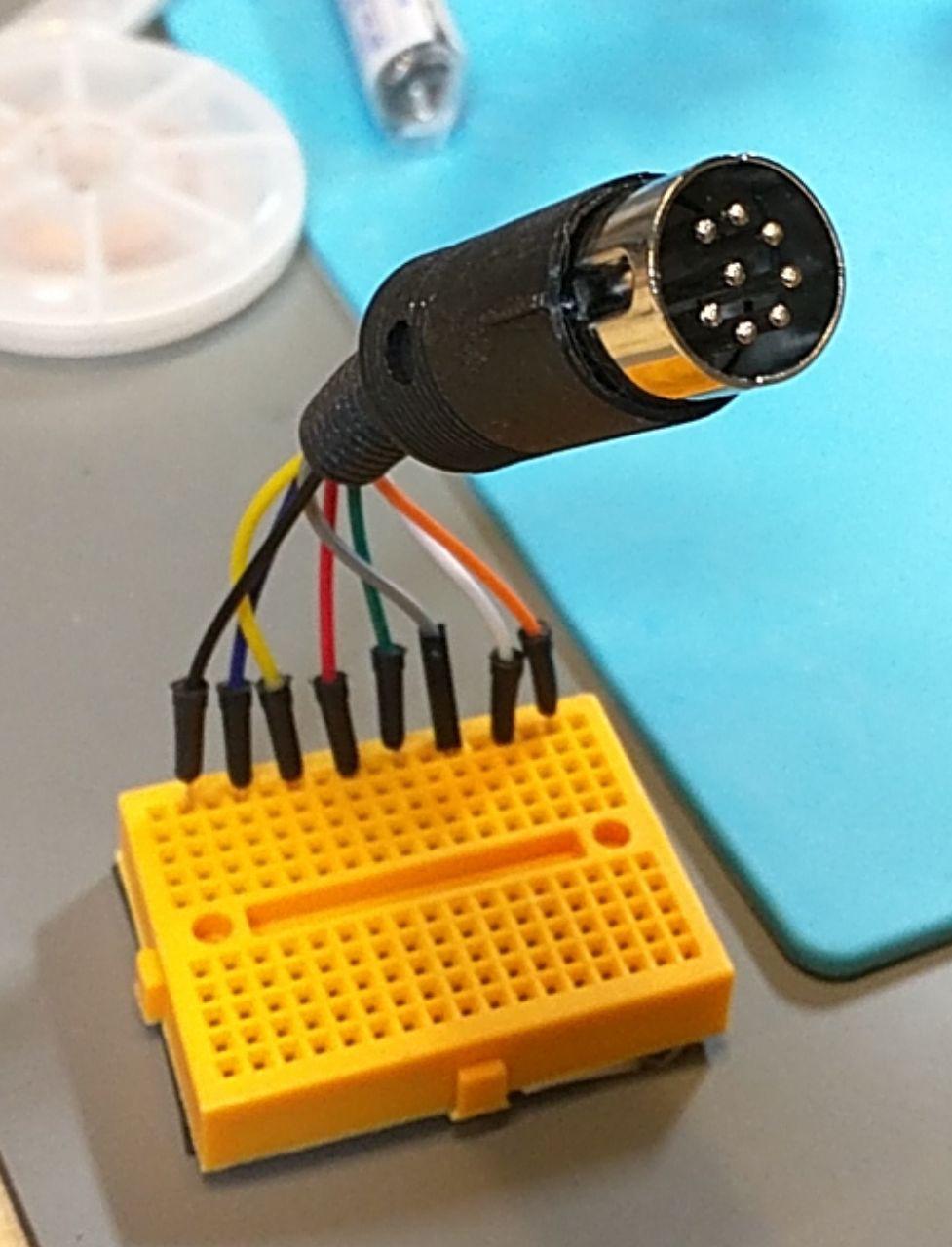 This allows me to bring the signals on to a breadboard where I can 'scope them out, cross-connect them to a more standard video cable into a monitor, and so on.

The pin to wire colour assigment that I use is designed to be reasonably mnemonic for the (informal) standard for 8-pin DIN RGB video on Japanese 8-bit computers as described in the community wiki answer, though this of course can be used for CMT (cassette) ports as well:

(A similar breakout could be made for 5-pin ports.)

Note that the wires are kept quite short; this is important when using this for video since obviously this isn't coax.

Not the answer you're looking for? Browse other questions tagged hardware video cassette-tape or ask your own question.

8
Are there any trapdoor slot video cards for a non-tower Amiga 1200?
10
Why CPC464 display is less stable while reading from cassette?
21
Why did the Atari 8-bit computers make beeping noises while accessing the disk and cassette drives?
8
Connecting an Atari 130XE to SM124 monitor
19
What video connections were common in Europe?
11
What specific technical advance(s) allowed PCs to play “Full-screen full-motion” video?
9
What Video Chips/Video generation techniques are usable for the Z80?
14
Using a modern PC or other digital audio recording device as a cassette recorder replacement