VGA controller for my W65C02 computer

I´m planning to build a small computer system, based on the W65C02 from Western Design Center. This computer system should also have a VGA interface with a graphic and a text mode, defined with the following parameters:

But I´m struggling with the video memory. Please take a look at my schematic (without the text mode). 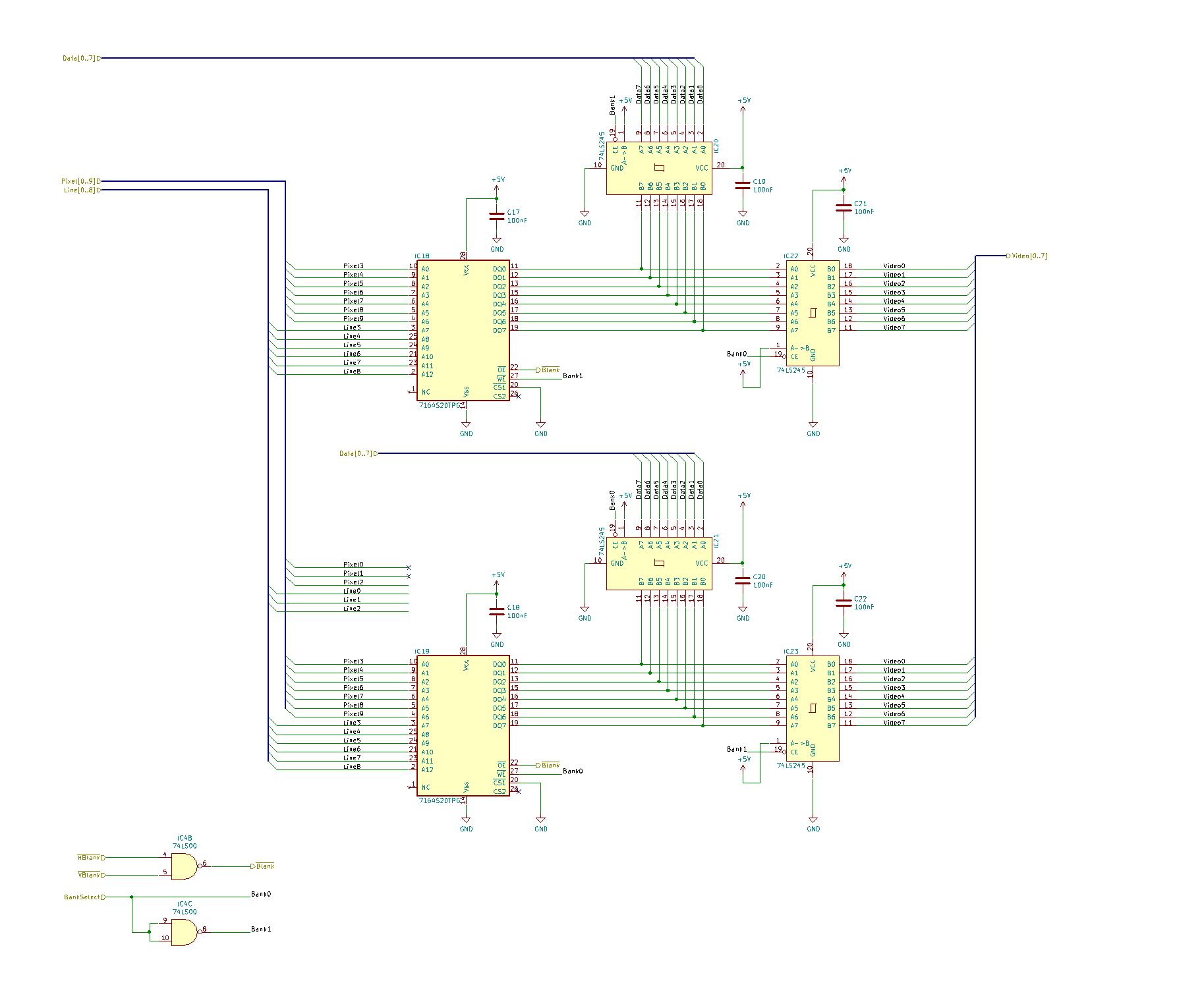 I don´t know how I should realize the CPU interface for the video RAM. One idea was to use double buffering, so the VGA controller uses another memory than the CPU or is it enough to only write to the memory when a blank phase is active. This would result in 639 pauses with 6,3 µs each and one pause with 1,4 ms per frame (the CPU should run with a clock of 1 MHz).

(Preface, this is RC.SE, not EE.SE, so less appropriate for such questions - so I wont go into schematic details)

As usual there are many ways. The most common are synchronizing CPU speed and video to use 'the' other half. Or separate both RAMs and access only during pause. Or use a dedicated video chip already offering separation.

Eventually the most common in way used in 6502 systems - at least by number of sold units since every Apple II or Commodore does it. After all, a 1 MHz 6502 needs 2 MHz memory to function, but uses only every second 'slot' for access - leaving half the bandwith for some other device. In this case Video. To build it, a bunch of muxes are needed to access RAM from either (video, CPU) side. While it seams to offer simple access, it does have several disadvantages

For a new system I'd rather not go that way. It got way to harsh limitations.

This needs about the same set of muxes, but now not handled directly by the CPU, but via a few latches. While adding a tiny overhead in writing to RAM, it simplifies not only design and removes most of the obstacles from synchronized memory but as well

The last one will considerable simplify low level programming, more than offseting the added instructions to set registers, as now conversion between row/column and memory address is done in hardware.

- Use Of a Dedicated Chip

Add a 9928 or 9950, have it do all the video mode, RAM and whatsoever handling and concentrate on video output circuitry.

Well, it depends on all the timing you want to have. You got to do the math yourself, figuring out how it fits - after all, that's the most basic task here. If you're doing something like classic home computers, it'll be more than enough. Then again, doing it at 100 Hz and high resolution you may want to rethink the whole concept

Why a text mode at all?

Text modes are a classic way to save on RAM need for image storage. Quite handy back when each KiB counted, and large flat bitmaps were a high end luxury. But here you got high resolution bitmap, so why bothering with a text mode at all, complicating the design? Draw them, like next to any computer does nowadays. It'll be just 8 bytes instead of 1, done at quite low level, so not much slow down either. Especially when using separate memory (*2). Offering much freedom in character design and combination of graphics and text as well. There's a reason the very first Mac got bitmap (*3).

*1 - Think the odd speeds of various Commodores, making them run as well at different speeds depending on video standard, creating hurdles for timing dependant software. Or the variable clock length of an Apple II.

*2 - With readable latches a simple INC ROW will do all necessary address handling.

How do I implement the text mode.

The usual method is to send the video data Byte to the 8 higher address inputs of the character ROM to select the character pattern, and the low bits of the video line counter to the low ROM address inputs (eg. A0-3 for an 8x16 font) to select the pattern row. The character ROM then outputs 8 bits which are latched and serialized to pixels via a parallel to serial shift register. Since the ROM is only read once at the start of each character row, the access time just has to be less than 8 pixels.

If you want individually colored characters then you also need color attributes stored in another area of video RAM (which could be a small separate RAM chip eg. 2kx8 for 80x25 characters). This is read at the same time as the character ROM, and its output latched while the row pixels are being sent. The upper and lower nibbles of the latched attribute Byte are fed into a 4 bit 2-1 mux switched by the pixel bit to color each pixel. The 4 bit output is then converted to analog to produce 16 foreground and 16 background colors.

I've been musing about stuff like this here: Thinking through the design of a TTL video card: what memory chips and how to manage memory? and the people didn't like it. I never get the value of shutting down explorative discussions. Ah well.

If you really want to run the CPU in 1 MHz, your video circuit should make the clock signal for the CPU and give it whatever is left over. But I figure if you want raster line interrupts and light pen strobe interrupts, you want to do better than run the CPU in the video blank phases.

I think the constraints and math goes like this: your video card sets the beat, since it cannot wait and keep in sync. So the video card in any way generates the clock for the CPU. That's settled.

The video card needs a lot of bandwidth from RAM. In monochrome mode that would be access for one byte every 8 pixels. 3.14 MHz, 318 ns. Double that for CPU to get in on the interleaved cycles and you will need 150 ns RAM. That is what I have read these DRAMS could do squeezing the refresh in as well. I could be wrong on the exact numbers.

For a 4 color palette mode with palette changeable for each 8x8 pixel block (e.g. C64 VIC-II style) you need 2 bits per pixel, so your run on the RAM doubles down. This is why the C64 could not do more than 320x200.

If you wanted to run everything at full blast in 25.175 MHz with one byte per pixel, and the CPU in interleaving cycles, you would need the RAM to squeeze into 19 ns cycles. Is there any SRAM chip that can do that? I doubt it.

This is where my thinking has moved to use dedicated video memory and do it in parallel. My favorite would be a 1Mx4 bit chip, and I would use 3 in parallel for a 12 bit color space. But even then, at 640x480 I would need it to respond in 39.8 ns. Which is still too fast! So perhaps a 1M x 1 bit organization and I would use 9 in parallel to have 3 bits for each color channel, MCM6227 or CY7C107D perhaps? That CY can do 10 ns. With that we could even do wider. But I would really like to stick to DIP packages, not surface mount.

What I would like is an exhaustive list of all SRAMs that are still available that are DIP packages and I would find my size and speed.

As for all those other "modes" they are just variations on the theme how you end up with your RGB values to send to the monitor. If you get one byte for an 80 character wide text mode display, your memory bandwidth goes down to 39.25 kHz. The bits you get from the CHAR-ROM, and then the bits to pixels using whatever color palettes from RAM or internal registers.

Now have you thought about the design of your sprite overlays already? With mask (alpha channel?) and pixels? I have, would need an adder to add the offset and then for each sprite read the memory or internal registers for XOR mask OR pixels on the fly to determine the final RGB value. This lead me to really appreciate what the VIC-II was all doing at the same time, and makes me think even more about having separate video RAM instead of using the regular CPU's memory.

By the way, did you think about how to interface the video RAM with the CPU? I would hate to write through a little port setting pixel address and pixel value one by one. I am thinking of mapping the VRAM into the CPU's address space, write to it, and then un-map it to continue working with the normal RAM underneath.

And to complete the brainstorming here, in my hunt for RAM chips, I also saw dual-port RAM. They went up to 8k x 8bit, and have two sets of separate A and D pins. I don't remember the speed.

Not the answer you're looking for? Browse other questions tagged vga or ask your own question.

1
Thinking through the design of a TTL video card: what memory chips and how to manage memory?

12
Game Boy DMG to VGA
4
Which graphics adapters outputted S-Video over VGA?
8
Choosing a VGA card for the IBM 5162?
8
Strange "snow" artifacts when dragging a window in 256-color mode
2
What are the HSync and VSync frequencies of these common VGA tweak modes?
11
Why are my VGA vram to vram copies so slow?
4
What type of video card would be able to drive a VGA monitor that uses a standard HD 15 pin connector with a non VGA standard pinout?
15
How to use "AND," "OR," and "XOR" modes for VGA Drawing