What was the point of the label on the bottom of the NES? [closed]

The original NES has a label printed onto it that the device would not "cause harmful interference". Why would they write that? Did people think the NES might be dangerous? Is this some kind of legal thing? 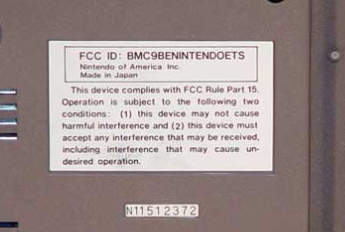 "Interference" could be anything from messing up the display on your own TV, through disrupting radio communications by the emergency services etc, up to the (very unlikely, for a games console) possibility of causing health risks.

The first USA legislation controlling use of radio equipment was passed in 1912. The FCC was founded in 1934, replacing an earlier enforcement organization, and with a name change from "radio" to "communications" reflecting the wider use of technology - i.e. the FCC also covers cable communications, not just radio transmissions.

The actual regulations have changed over time as new technology is developed. Part 15 of the regulations dates from 1975, but previously computer equipment would probably have been covered by a more general regulation.

Other countries have similar regulations and regulatory organizations, but most major countries accept each other's regulatory standards - i.e. FCC compliance is generally acceptable world wide, not just in the USA.

Pretty much every piece of electronics that's sold in the US, and may potentially be powered off the AC mains, has a label like that on it somewhere. It is basically a legal requirement... no certification, not legal to plug in and use outside of some very limited circumstances. And I think it's actually harder / more complicated to get certified for home equipment than for offices; there's some urban myth that off-white casings became de rigeur for PC-type computers and other items of office paraphenalia (vs woodgrain or other more interesting designs) in order to mark out those which weren't licensed for use outside of that setting (a bit like educational equipment being bright orange to deter theft), which obviously died a death as a useful visual cue once manufacturers just started using the same casings for all their models regardless of license.

Wasn't always a thing, I think it was an optional certification at first, but became more stringently required after home computers/consoles and VCRs started becoming popular and the more poorly made ones were found to emit ludicrous amounts of RF that actually could interfere with other devices, sometimes catastrophically (OK, it's annoying if it disrupts your TV program, worse if it smokes your TV, but think about how many other device it'd be far less amusing to have that happen to), as well as being vulnerable to outside interference (e.g. the ignition of an old and similarly poorly grounded/shielded car driving past), so they're probably more prominent on 80s machines when it was still a relatively novel thing.

Look around the other things you have scattered about and you'll likely start finding loads of them, in all manner of unexpected places.

33
Did the NES do anything special to support coprocessors?
1
NES PPU die photo
5
Does the NES handle unlisted processor instructions differently from the Famicom?
5
How does the “Small fire-Mario” glitch in SMB1 work?
10
Why was “Flight Simulator II” never ported to the NES? Was it technically impossible?
4
Why was the golden game Ocarina of Time not given a golden cartridge in the PAL region?
19
Could a single NES ROM cartridge run on both PAL and NTSC systems?
5
Was there anything about the “power of the NES” that made Super Mario Bros. have “realistic physics”?