Did the CPU test on the Apple //e Diagnostics utility do anything?

After reading about the Apple //e diagnostics card, I noticed on the screenshot below that it reports a CPU test and that the microprocessor is OK: 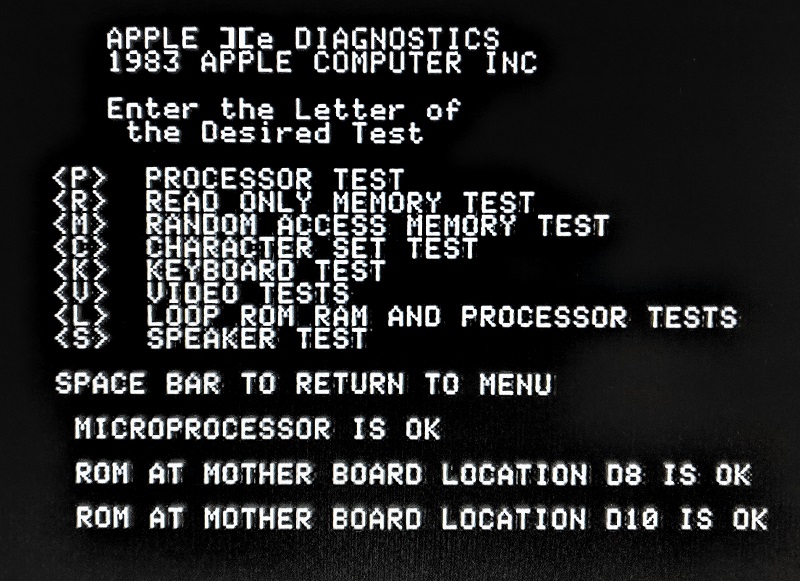 So I'm curious did the PROCESSOR TEST actually do anything? One would think that if the computer got far enough to boot the diagnostics and display the screen, then the CPU MUST be OK, right? Or is there something that it attempted to do to validate that the CPU was indeed OK?

So I'm curious did the PROCESSOR TEST actually do anything?

AFAIR it's exactly the same as loaded from the diagnostics disk. It runs a bunch of subroutines, each testing several instructions. All NMOS instructions are tested, none of the CMOS additions (*1).

One would think that if the computer got far enough to boot the diagnostics and display the screen, then the CPU MUST be OK, right

For one, there isn't many code until the card gets booted by the Autostart ROM - and not all instructions are used until then. I wouldn't wonder if it's less than 30%. Keep in mind, there are ~160 different opcodes - plus decimal mode for all ADC/SBC to be testet.

Or is there something that it attempted to do to validate that the CPU was indeed OK?

As said, it calls up all instructions and verifies the results.

*1 - The original Apple II, II+ and early IIe had an NMOS 6502, while the later IIe and all IIc used a CMOS 65C02 which offered additional instructions. AFAIK the CPU tests have never been extended to cover the new instructions.

Not the answer you're looking for? Browse other questions tagged apple-ii cpu diagnostics or ask your own question.

12
How do I troubleshoot an Apple //e with no power light?
24
How did the Apple II forward binary instructions to the Z80 software card with CPM?
31
Does every retrocomputer and console with NTSC composite output have 'artifact color' ability?
16
How do accelerators and CPU cards work on the Apple II?
5
Test emulated 8080 CPU without an OS?
11
How did the Zip Chip and RocketChip accelerators work for the Apple II?
7
How long should I expect the Apple IIc self test to run?
1
8088 CPU A16-A19 address lines go crazy with nop test after 0FFFF address