What should be the waveform for ZX Spectrum tapes?

I am digitizing about 40 tapes with programs for the ZX Spectrum. I am somewhat puzzled by the waveform after digitization. The signal of most cassettes is meander-shaped. 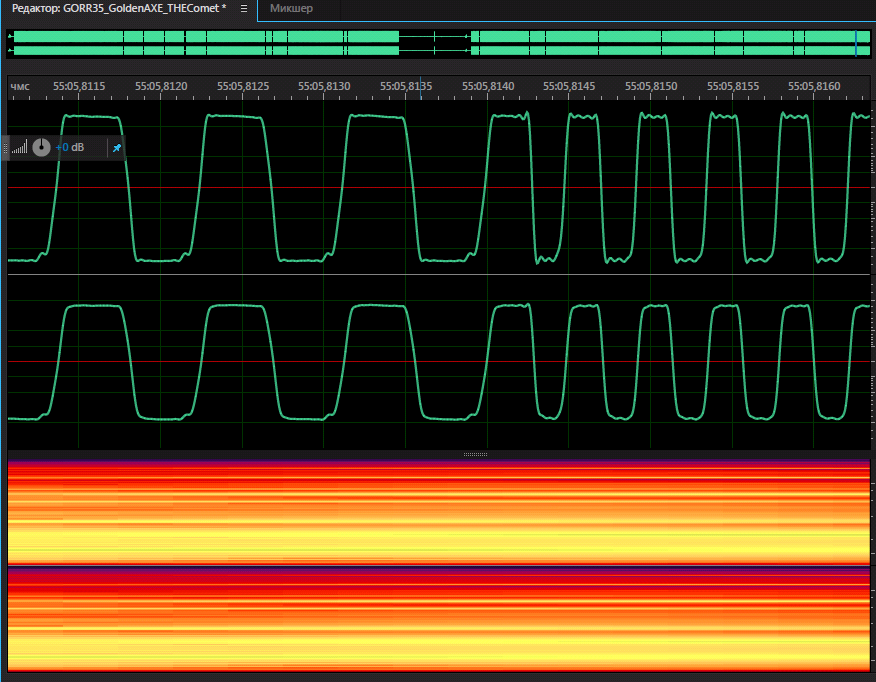 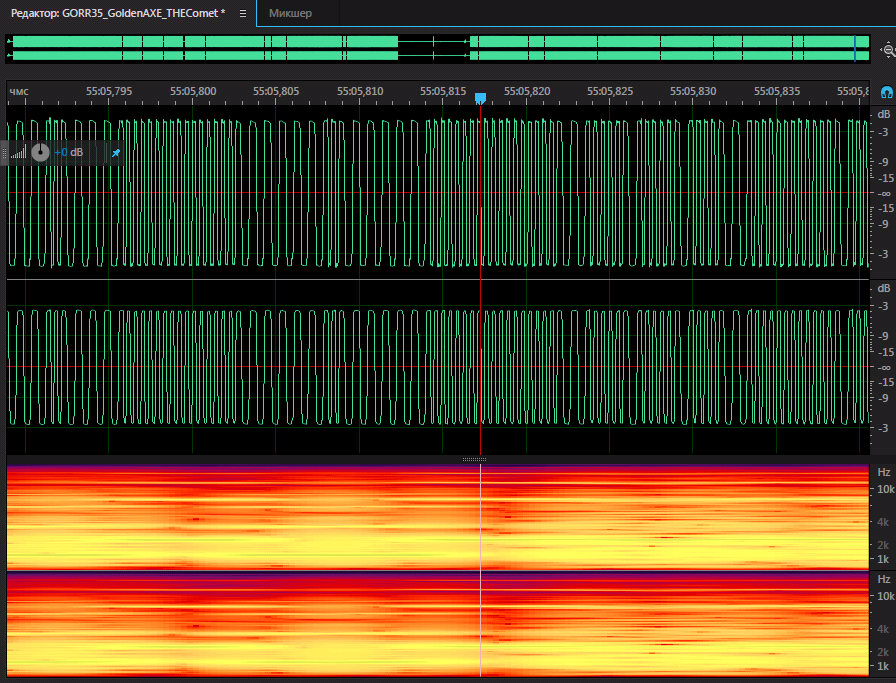 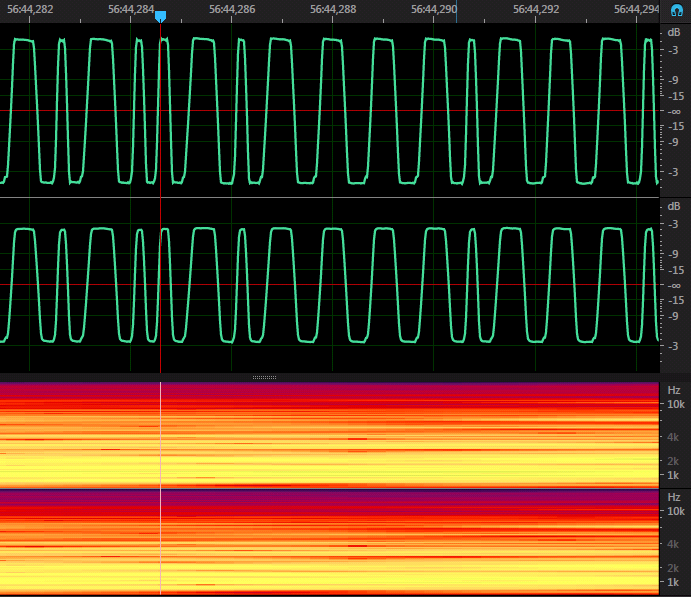 One of the cassettes can be downloaded from DropBox.

Some cassettes have a sinusoidal signal. This is an example of a cassette with a bad record. This cassette has an unstable amplitude. 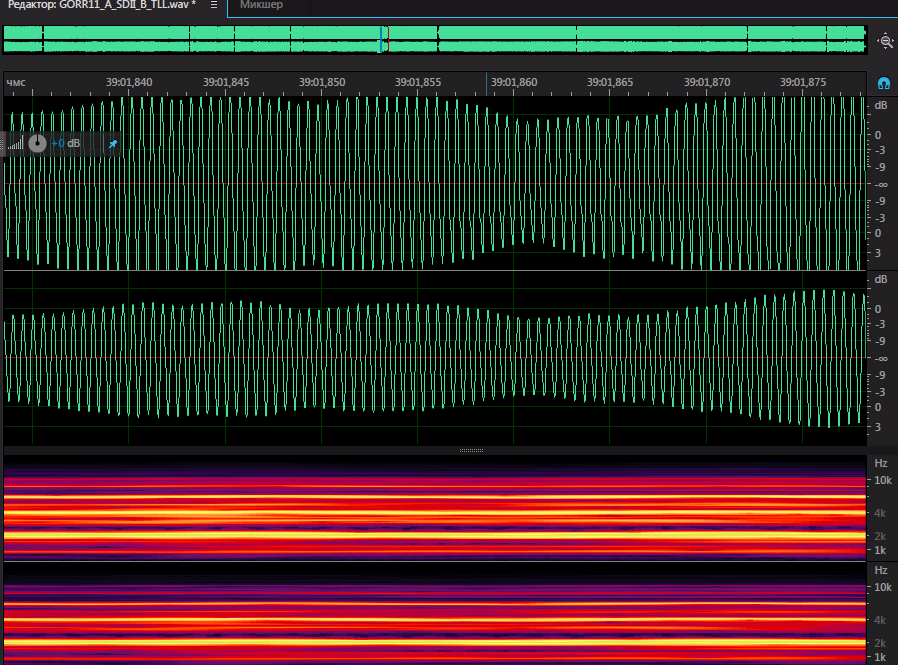 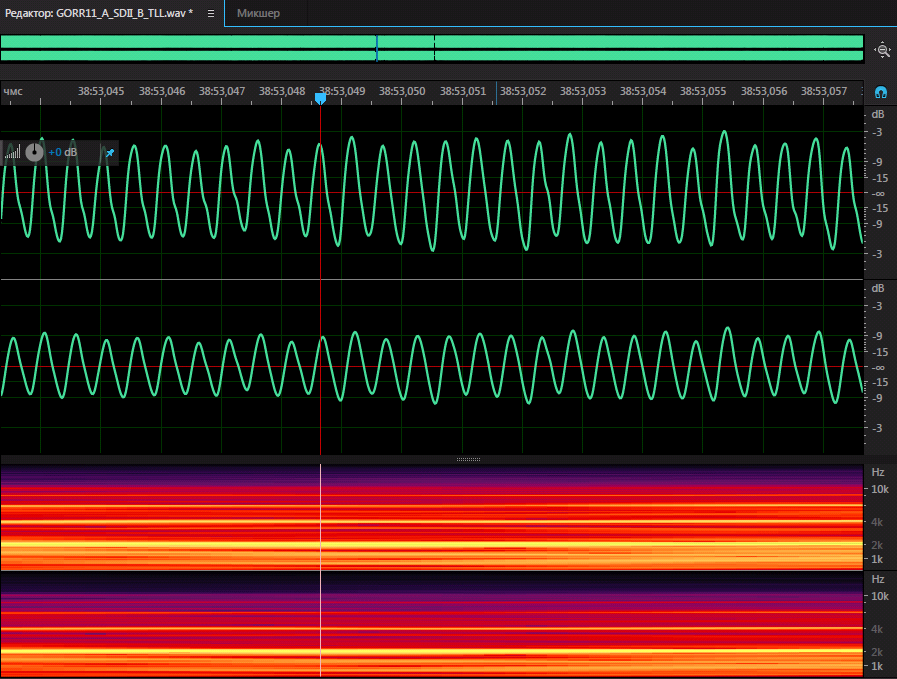 This cassette can be downloaded from DropBox

Sometimes there are records with "dancing" short pulses. 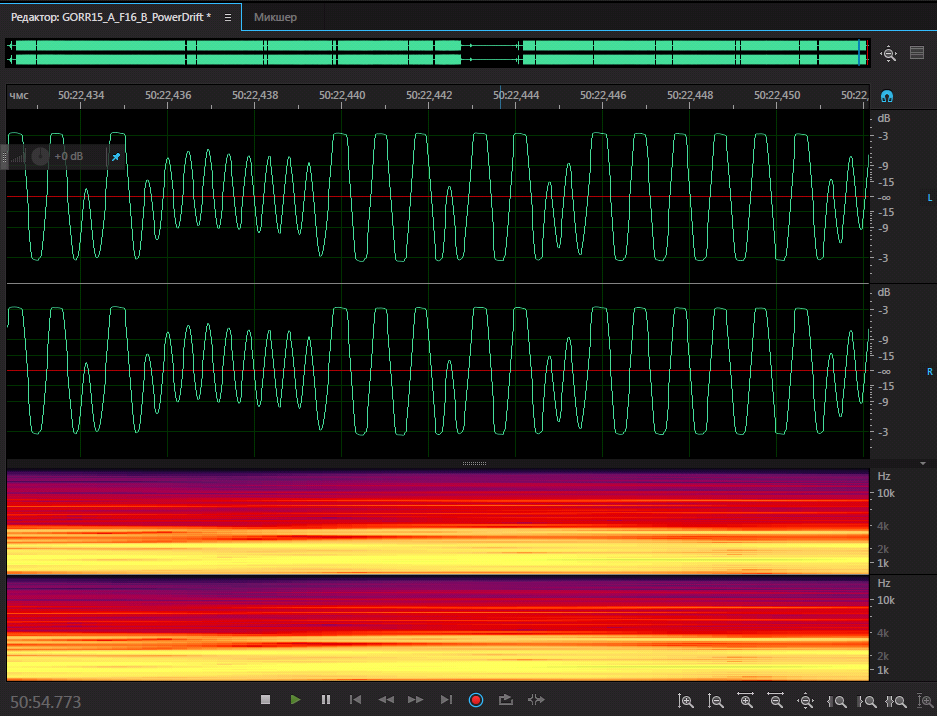 Questions: 1. What shape should the pulses be for successfully decoding programs recorded on these tapes?

P.S. After some experiments with adjusting the signal level and the tape recorder head, I came to the conclusion that this is important for some audio tapes. And returning to the topic - the waveform must be sinusoidal.

Demonstration of the same piece of tape as an example (this files can be downloaded from Dropbox.):

Before adjust the tape recorder head 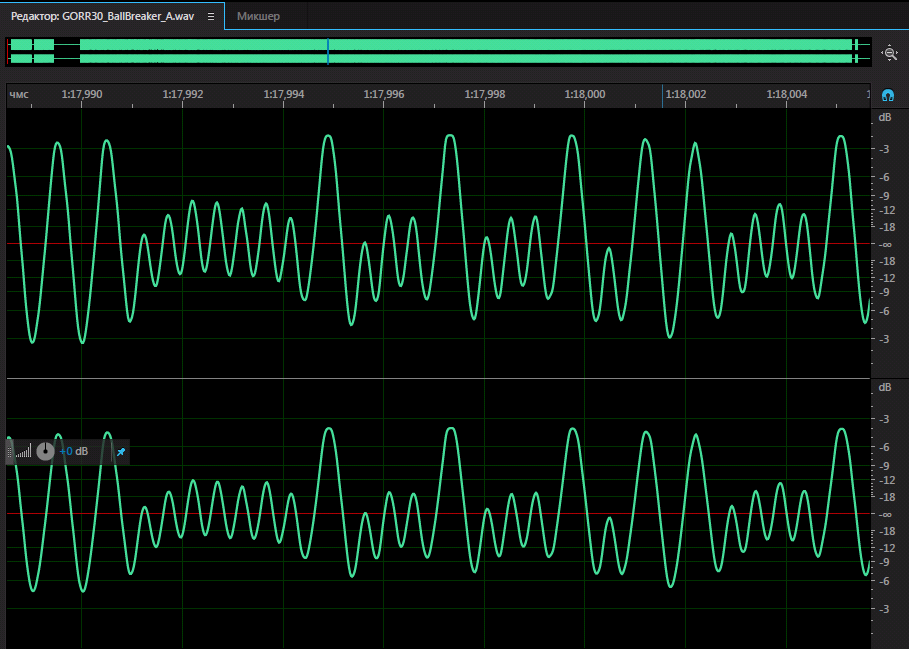 ...after adjust the tape recorder head 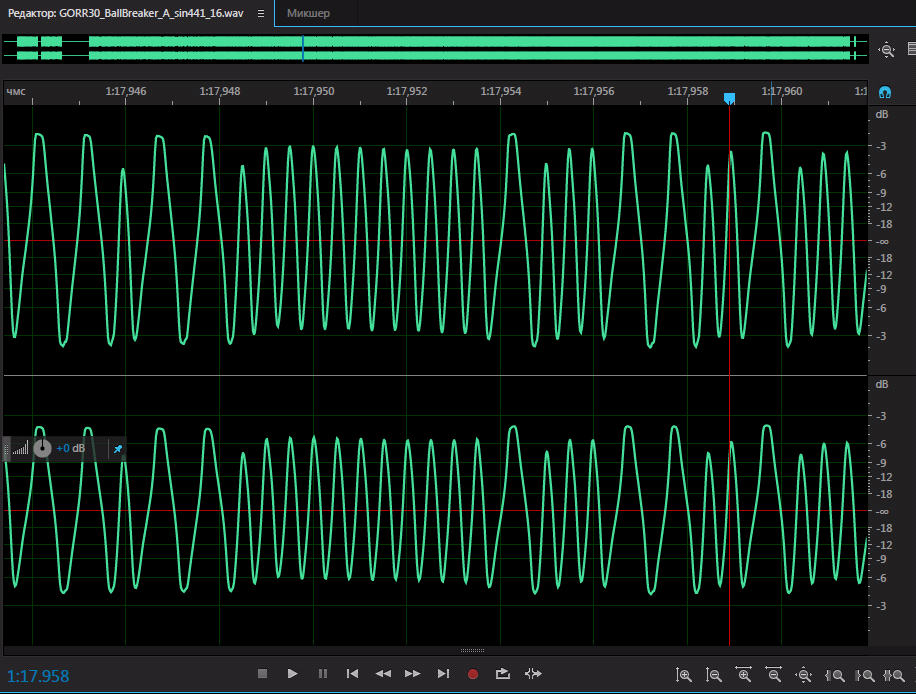 Those variable amplitudes looks like electronics problem like failing caps somewhere along the way (recording/playback) or unshielded too long cables or partial remagnetization or even HW bug (some recorders like ELTA have a bug in writing head circuitry that corrupted tapes a bit each time it was played ...)

the correct output should be a rectangular signal with 2 levels of amplitude.

However writing own SW recognizing pulses and correcting the signal should be easy to do...

Here is captured GIF from mine emulator executing:

On the left is border and on the right is Oscillogram of the SOUND output going to Soundcard...

I finally had some time/mood for this. I made an win32 app for filtering the wav files in manner I described in my comments. Here it is:

I applied it on your GORR30_BallBreaker_A.wav here screenshot so you see the signal change after filtering: 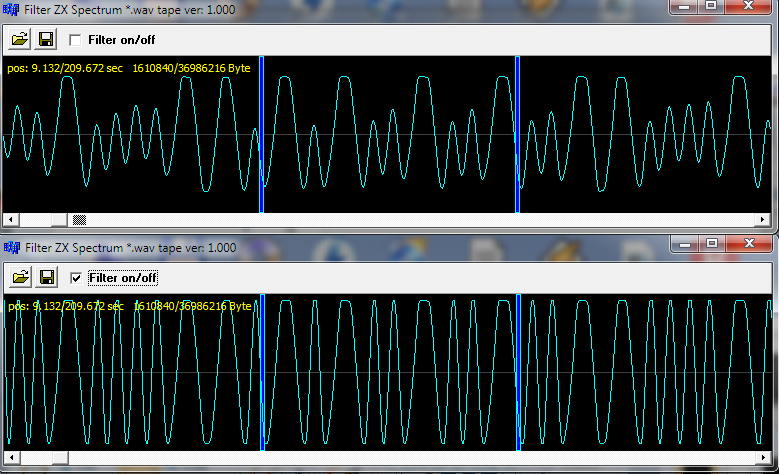 Your original wav does not load into my emulator. It does not go pass the first file header (no sync and no error). After filtering It got pass the file header: 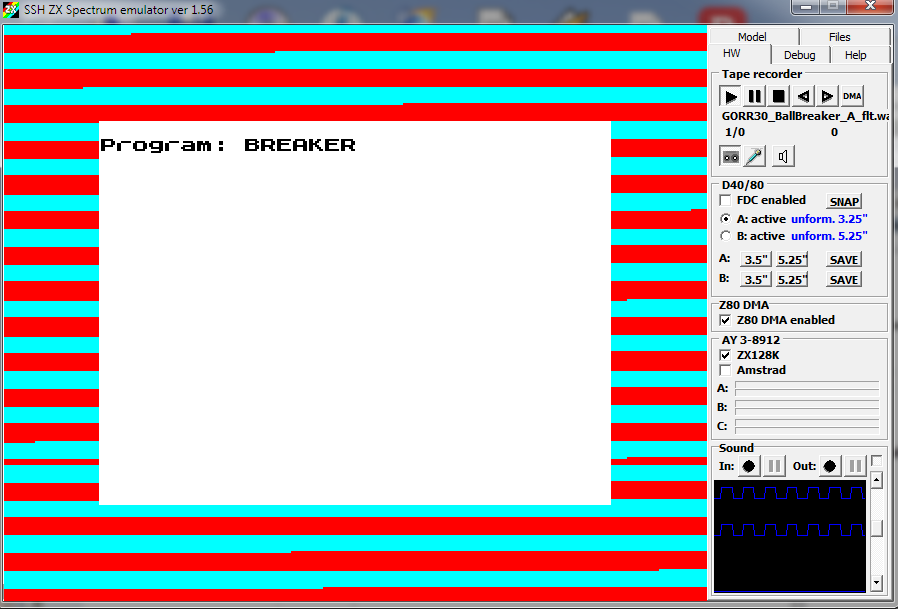 but error while code: 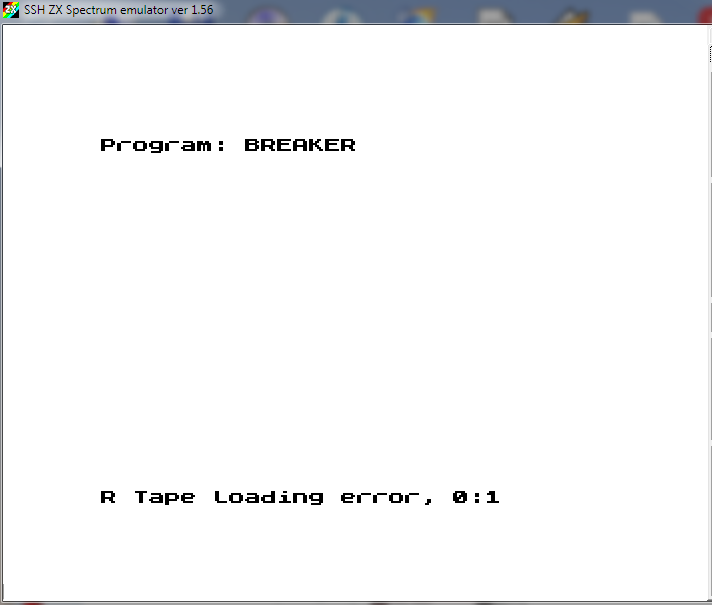 so loader code is not correctly loaded (due to too much corruption of the tape): 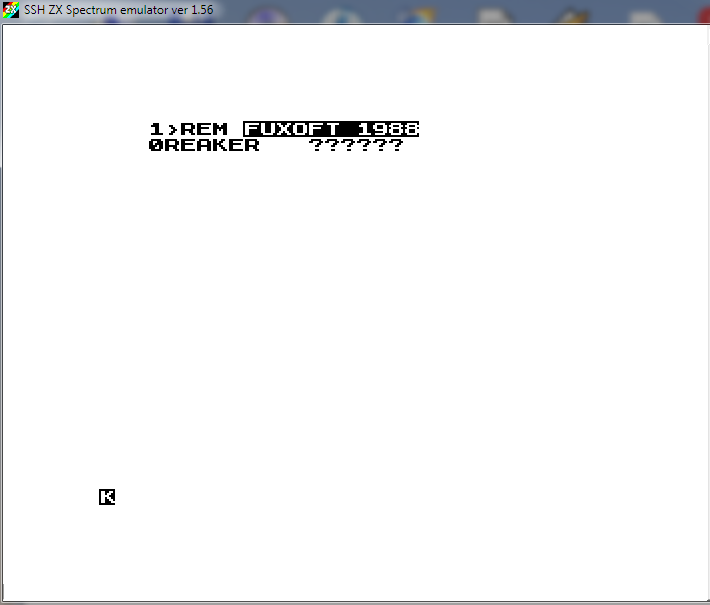 So try to adjust the tape recorder head (with screw driver) first until you hear more clear sound, then play with volume ... digitize apply filter and try to load

Heh FUXOFT :) he had nice games, brings up memories

A 'pulse' here is either a mark or a space, so 2 pulses makes a complete square wave cycle.

Sync pulses: the pilot tone is followed by two sync pulses of 667 and 735 T-states resp.

The initial polarity of the signal does not matter - everything in the ROM loader is edge-triggered rather than level-triggered.

The shape is not as important as it looks. The Spectrum uses a primitive FSK decoding, so the amplitude of the audio signal is not used, nor if it is sinusoidal or squared. The key thing is "zero crossing points": the signal must be so that its level goes up and down the zero volts level and stay in either area the same time. During the decoding phase, the Spectrum detects edges (from low to high, or high to low) and measure how much time the signal stays in one half or the other.

So, any audio signal that meets this criteria, and has enough amplitude (about 3Vpp) so that the input can drive the small trigger schmitt input at the ULA should work. Ideally, edges should be as sharp as possible.

Any decent audio editor. Audacity can help you. I use Sound Forge more, and I've found the touch pencil tool to be extremely useful to perform fine editings to restore audio levels where the volume dropped out.

Use, when possible, a mono cassette, not a stereo one (the coil and aperture at the magnetic head is a little bigger and will help you to capture a better signal). Of course, demagnetize the reading head and adjust it. The Spectrum +2/+3 has a service mode in which a small utility to calibrate tape heads is available.

A possible tool is eightbitjim/cassette-nibbler: Data recovery from 8-bit computer cassette tapes (Commodore 64, Vic 20, ZX Spectrum, etc). I'm not sure how well it reads nonstandard loaders, but in listing mode (-destination=listing) it gave me this for the GORR34 tape converted to wav:

FIRETRAP seems to be a cracked copy of R-Type 2, from the loader information dumped by cassette-nibbler. By running the program with no special options then converting the CARLOS* TAP files to wav, joining them, then running the whole mess through fuse, I at least got a loading screen: 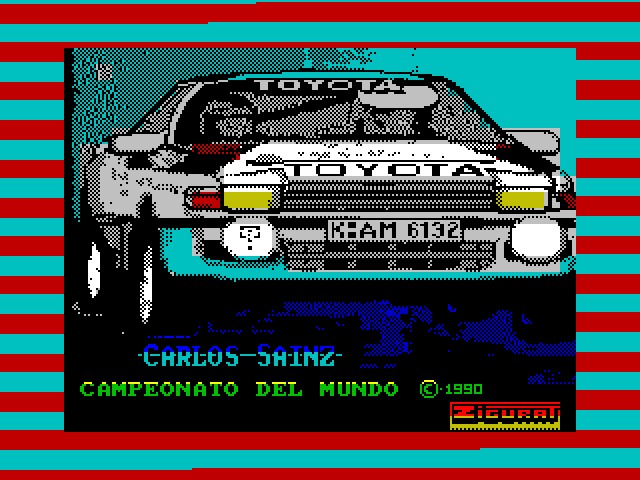 With some more intelligent use than mine, I'm sure you could recover something.

Alternatively there's audio2tape from fuse-utils. It's very slow, and didn't do as good a job.

I did recover a GORR30_BallBreaker_A.wav, and, yes this record is initially broken. There are twenty seven (27) bits missed in middle of it. The broken part is marked with yellow circle on screenshot: 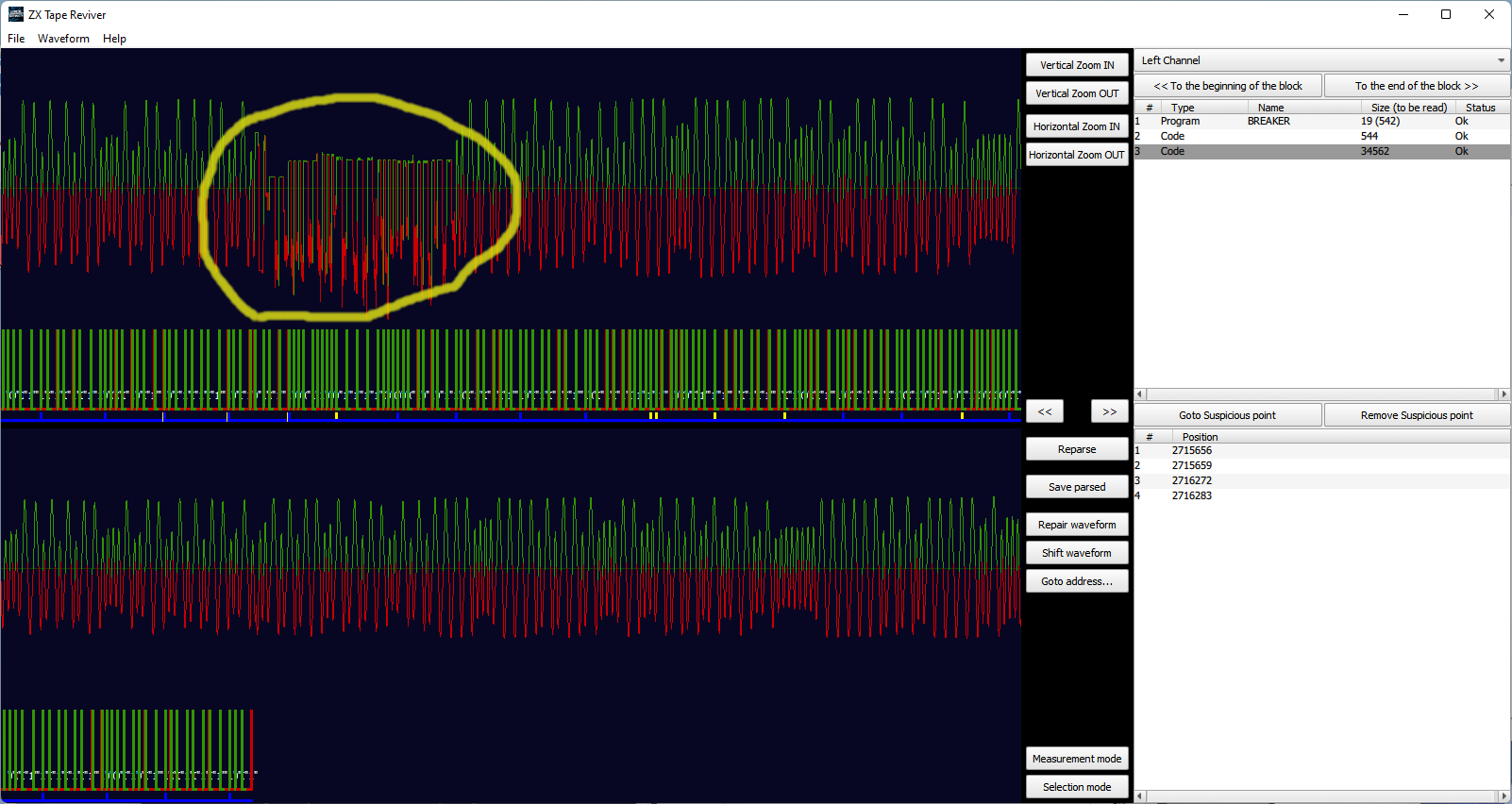 To repair a wav file, I had used my program ZXTapeReviver (64-bit Windows version 3)

You can freely try to use it to repair your ZX Spectrum tape records. But, please, keep in mind, that this program is in early development stage and can contain some bugs.

Program overview and how-to-use video you can watch here: https://youtu.be/i3FRRAro8hA 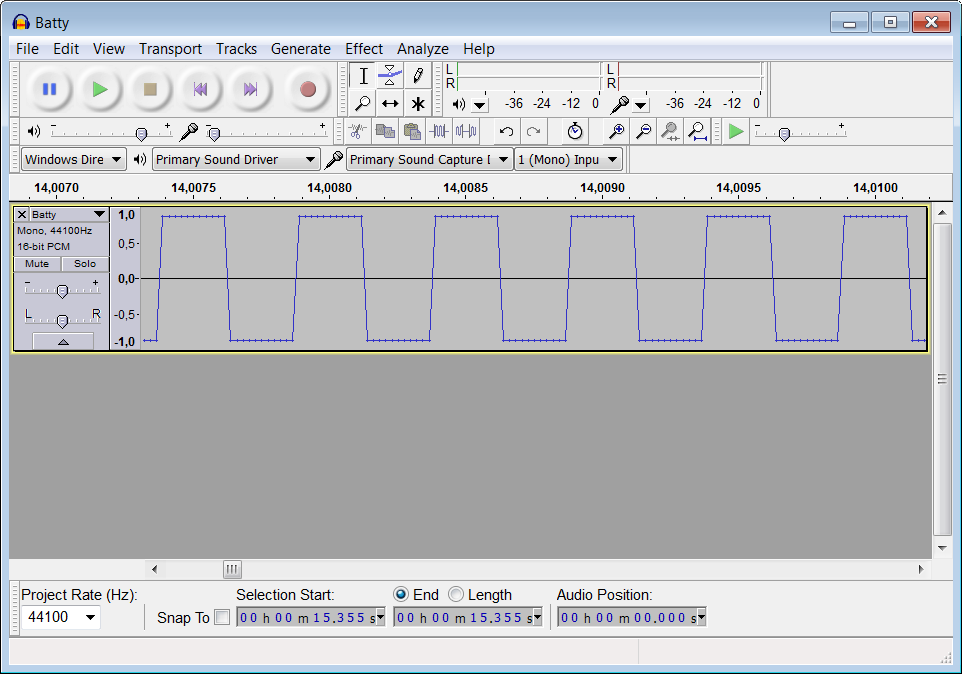 The procedure to achieve perfect copy:

If input audio signal is bad, try to tune audio head on cassette player by listening tone on headphones. Also, try to lower volume to 75%, as high amplification can make it sound worse. Don't bother saving games that you can download from some of the ZX Spectrum archives.

Just my 2 cents on this. The Spectrum tapes you are looking at use Frequency Modulation (FM) instead of Amplitude Modulation (AM). This makes them incredibly resilient to amplitude noise, such as you are showing a lot of. So, the actual data values are not encoded by the amplitude of the signal, rather the frequency of it.

I assume that you'd need a frequency demodulator, either software or hardware.

But that's only half of your problem. The other half is that I assume that whatever data you have on there needs to run on a spectrum emulator, so you need to piece it back together correctly. Simply capturing the signal won't work, so I'd look for an emulator that has the ability to load from audio files, then save a snapshot of the memory right after loading.

I listened to some of the tapes you attached, and for the fun of it, I manually decoded the first header of the GORR11_A_SDII_B_TLL, it looks something like this: