Did any 360-compatible machine implement registers in core?

In the early days of transistors, when they cost on the order of a dollar each, it was possible to implement CPU registers with magnetic cores (the technology used for main memory at the time) instead of transistors, trading away performance for cost.

The IBM 360 architecture had sixteen registers of 32 bits each, a generous allowance at the time, and was designed to scale over multiple orders of magnitude of price and performance, making it a likely candidate for such trade-offs.

Included in the 8,192-position storage unit is an additional 512-position auxiliary storage section. In this section, 256 positions are reserved for use by the miltiplexor [sic] channel. The other 256 positions of local storage are used by the CPU for special and general purpose registers (Figure 2-74). 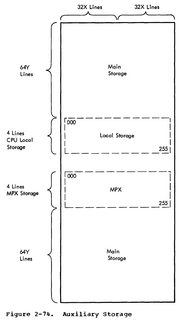 Similar statements are made for the 16K and 32K storage units. These storage units use core memory. On page 3-10 you can see how the the registers are laid out in local memory.

The IBM 2030 is basically an 8-bit CPU that executes microcode that actually executes the 32-bit IBM 360 instruction set. It has internal 8-bit registers that I assume are implemented with semiconductor logic, but IBM 360's architectural registers are stored in core memory alongside the main memory.

Yes, of course, in fact, it was standard for low end machines. Beside IBM, as Ross Ridge details, many early compatible manufacturers did so. Examples are Sperry's Univac 9000 series, RCA's low end Spectra 70 models 15 and 25, or Siemens 4004/15.

Not the answer you're looking for? Browse other questions tagged history hardware ibm mainframe s360 or ask your own question.

19
Limiting factor on sprite sizes
12
Did any RISC CPU ever take more than one clock cycle per instruction?
5
Why did IBM System /360 have byte addressable RAM, but didn't have 8 bits registers
2
Why did IBM System 360 have byte addressable RAM
32
What did Pete Stewart think he knew about efficient implementation of floating point denormals?
10
Did any 8-bit CPUs use dynamic memory for registers?
19
What was the earliest system to explicitly support threading based on shared memory?
9
Besides the IBM 709 and its descendents, did any other machine have "slightly longer" registers?
11
Did any core-memory computers have a read-and-erase instruction?