How do I clean/refurbish an Apple IIc Keyboard? 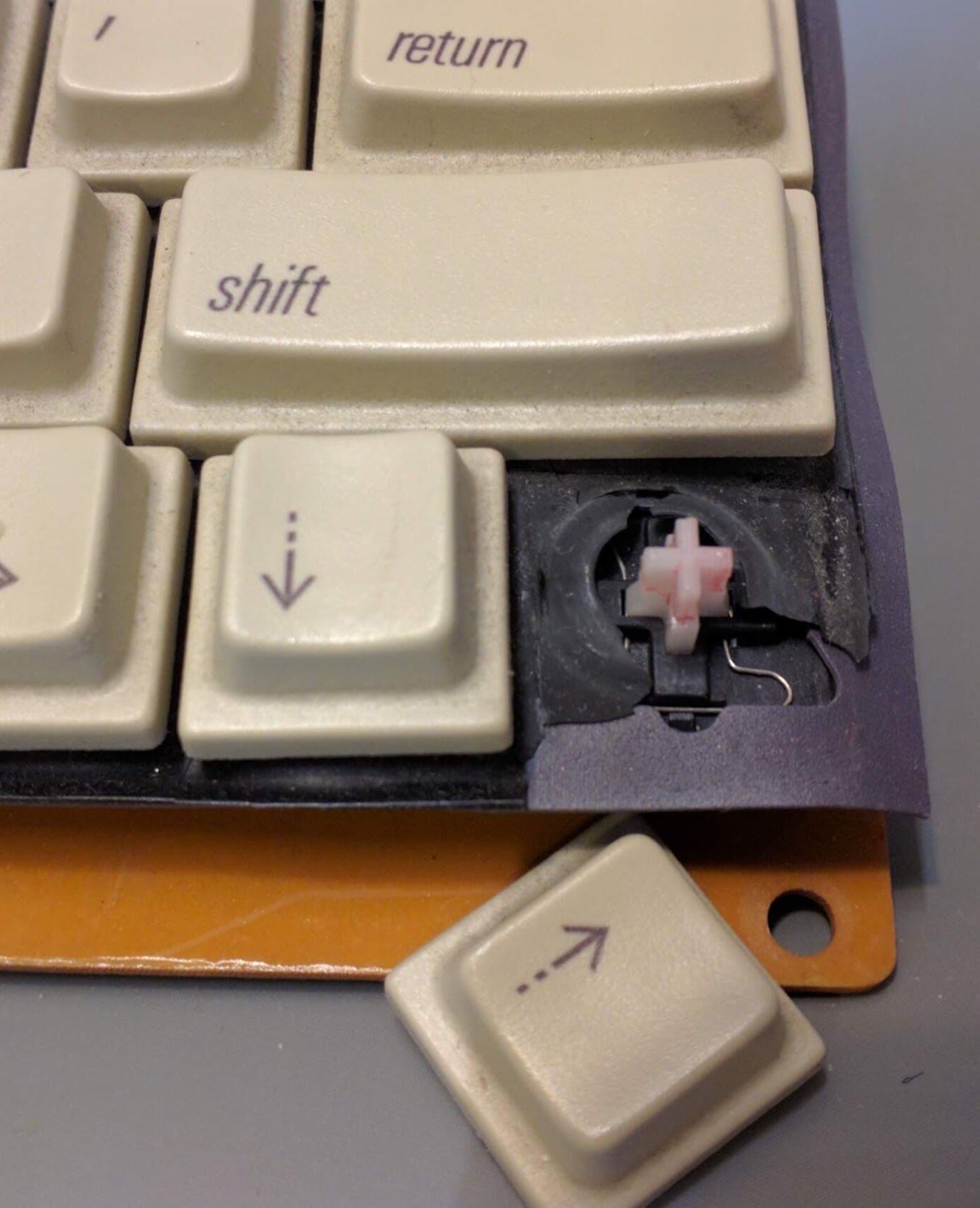 Most of the keys on the keyboard are very stiff and do not depress smoothly, requiring more than usual pressure to depress and then often depressing with an uncomfortable sort of a small "crunch" after which the pressure needed to bottom out the key decreases enormously. This happens particularly when not striking a key dead centre, getting worse as one moves further from the center of the key, though it happens for many keys even when pressed dead centre. The degree of the problem varies between keys; Q is pretty smooth for both centre and edge presses, whereas W is bad even for presses dead centre. The reset has the same issue. (That's not really a surprise; it appears to use the same keyswitch as the rest of the keys.)

The caps lock key and 80/40 and keyboard switches (again, all appear to be using the same keyswitch) also don't release easily from their depressed ("on") state; they need to be wiggled as one depresses them when trying to get them to release.

What are my options for improving the feel of my keyboard? Is there some sort of cleaning (perhaps involving isopropyl alcohol or contact cleaner) or lubrication I could do that would help fix things? Or do I need to replace the switches? In the latter case, the easiest option would be to find a replacement keyboard, but those seem difficult to find and expensive. If I were going to go so far as to desolder all the switches and replace them, what switches could I use?

The (non-Alps-keyswitch) keyboards for the Apple IIc were not particularily good even when new. Binding keys and uneven required force were somewhat normal. This has obviously not fixed itself during nearly 40 years ;)

What I did to mine to at least somewhat improve the situation:

My rubber protection sheet above the keyswithes has completely detoriated over time - I removed it and gave the keyboard (particularily the keeyswitch stems and hairpins) a good clean with a dry, stiff brush (after removing all keycaps first). Then I gave the wire links a bit of lubrication with a tad of silicon grease. The keyboard was still awkward to use. A (light) application of silicon spray to the keyswitch stems improved that to "usable" - the keyboard is still not great.

If you have the chance to "upgrade" to an Alps-keyswitch keyboard, do that - These keyboards are much better (actually worlds apart) than the later ones with no-name or apple-branded keyswitches.

When the 40/80 and "keyboard" switches don't release properly from their locked state, this isn't necessarily caused by the keyswitches themselves - check if they don't bend in the case openings.

I had a Iic with a keyboard that didn't have a crunch feel, but was incredibly hard to press. I removed all the keys and found I had two protection mats. The thin black one seen in your photo, and then another, thicker purple mat underneath the black one. The purple one had curled up in parts and was "rippley", for lack of a better term. I then followed the instructions here (https://tinkerdifferent.com/threads/fixing-stiff-apple-iic-keyboard-switches.1212/) to slightly bend the pins under the keys, which were providing too much of a tactile, bump when pressing the key.

I don't eat while using the computer, so I'm not too concerned with not having the deteriorating mats under there to protect from crumbs and spills. If you're having a hard "crunch" sensation when using, I'd recommend adjusting the angle of those pins under the keys to see if you can widen the angle, making it easier to press.

On comp.sys.apple2 Has answers and info of how to fix keyboard, but is the keyboard in question the right one? Also some of the fixes in there are not for the fainted heart. So continue with caution, searching more on the group could get more information. But one short quote from there:

"Also, somebody else mentioned that the ROM 255 keyboard had springs that were problematic. They removed those and the rubber mat underneath." More comprehensive repair details in the link. And the look of your keyboard, the rubber membrane has teared, so you would need to clean possible dirt or residue inside the keyboard and add more tension on springs maybe? If rubber membrane is not obtainable or cannot/ want take apart completely the key switches, then probably easier would be to look replacement keyboard. This keyboard Looks like yours?

Not the answer you're looking for? Browse other questions tagged apple-ii keyboards maintenance or ask your own question.

11
How should I clean the plastic exterior of my computers and parts?
1
How can I clean the RF-Out jack of the SNES
2
How can I make an external PSU for an Apple IIc?
8
In an Apple IIc, how is memory beyond 128K addressed?
9
How can slot 1 of the Apple ][ replace the keyboard?
26
What do the '80/40' and 'keyboard' buttons on my Apple IIc do?
4
How to get into Apple BASIC prompt on an Apple IIc?
4
How was the second bank of Apple IIc ROM accessed?
7
How did Apple IIc daughtercard expansions work?