How did humans interact with early computers without screens or sensors?

I also understand that the first electronic general purpose computing device (GPCD) which perhaps worked on the same electromechanic pattern of today's common computer devices was ENIAC and was completed around February 1946.
When I saw pictures of it, I didn't saw a screen device connected to it.

If an electromechanical computing device is not screened (hence no CLUI/TUI/GUI) and/or is not sensored for general spatial activity (hence not a robot)
What way or ways left to interact with it?

That distinction is a bit off, mixing unrelated categorisation. Analogue computers can be as well mechanical, as electromechanical as well as electronic (or pneumatic or hydoponic) - similar digital computers do not have to be electromechanical. For example Zuses Z1 is a fully mechanical-binary-floating-point computer that needs to be cranked to work :)

I also understand that the first electronic general purpose computing device (GPCD) which perhaps worked on the same electromechanic pattern of today's common computer devices was ENIAC which was completed around February 1946.

ENIAC wasn't the first, nor was it general purpose (as Retrac already pointed out). Equally, electromechanical doesn't imply digital.

A UI doesn't have to be 'screened'. A UI is whatever lets the User interact/interface.

and/or is not sensored for general spatial activity (hence not a robot) What way or ways left to interact with it?

After excluding everything, nothing should be left. So, lets rather see what has been used.

On the input side:

Imagine some 1940s Frankenstein movie, or alike, and it still falls short of what man has used to communicate with machines. Anything that can be thought of has been used on one machine or another. 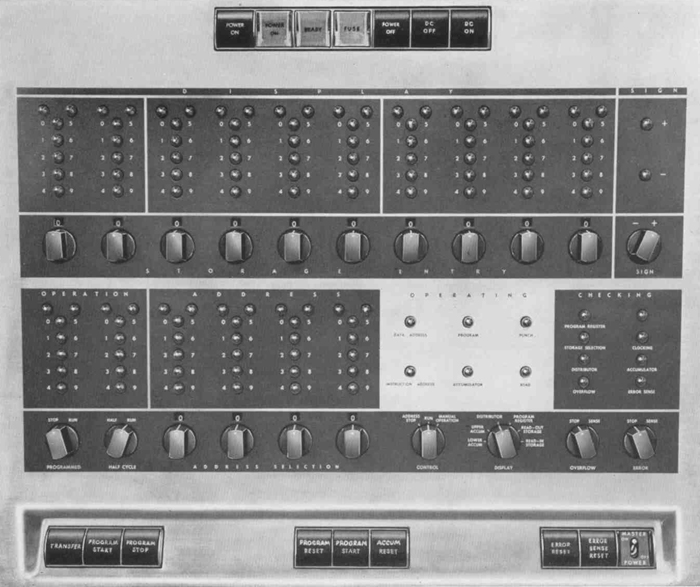 The top row of dials are used to configure in decimal values (the IBM 650 being a decimal machine). The repeated columns of 5 lights with 2 on top indicate 1 of 10 values for each digit of the 10 digit word the IBM 650 used. The lights below that row indicate operation and address. The other dials configure various settings, and the buttons trigger various actions based on the dials, like store to memory.

You can deposit instructions and data, examine any memory address, and begin execution from the console. That's all you need.

One of the first programs you enter in such a way are routines to run a punch card or paper tape reader, to read in the rest of your routines in a more humane fashion. Output was usually on punched card, paper tape, or printed to paper.

Interactive teletypes acting as terminals which could provide a command line interface would start to become common in the 1960s.

From the point-of-view of someone at the time, you interacted with early computers in the usual way.

From the 1930's onwards, business and some science used IBM and Remmington-Rand mechanical punched-card processing machines. You set up the specialized gear-based machines for your job (payroll, overdue accounts, super-hard math equation), punched data onto cards, fed them in, and the output was either printed (all caps), or punched onto more cards (for example, payroll checks). Some systems used a long paper tape (which had been used for telegraphs for 50+ years) or very early (1900) systems had numeric dials -- you hand-copied the answer after it finished. But however you did it, it was 1 run with 1 set of results.

A 1950's computer (UNIVAC, IBM702, Honeywell D-1000) essentially replaced the middle part of that system. If you worked at Prudential, you typed the same cards, fed into the same readers, and generated the same printed reports. That was on purpose. Businesses could buy a computer without having to retrain the entire data-processing staff.

It wasn't that simple. Quickly we started using new magnetic tape for I/O. And computers weren't seen only as "like the old machines, but faster" -- early on we knew they could also do more. There was some early work interacting using light pens (SAGE). But in general, we thought it was normal to have Batch Jobs, which were "1 run, 1 result, no interaction" for quite a while.

An early 1960's manual gives a nice feeling for how computers fit right into the old system: Chapter 1 explains how ADP (automatic data processing) consists of EAM and EDP. The old mechanical systems are Electric Accounting Machines, while computers are Electronic Data Processing machines. Using either of them is the same job. Ch2, page 11+, gives a nice history, then page 31 starts on EDP (again, computers). It explains how the major difference is only programming (which someone else does) and knowing how to mount tape reels sometimes.

There have been many different kinds of I/O devices since the early years:

There is some more history available at the Computer terminal Wikipedia page.

When your memory device is literally "a screen", you can just look and see what is held in memory.

(I think, but can't find a reference right now, that actually the display tube was a mirror of the actual storage tube - since the storage tube would have had a metal plate in front of it).

The video in the second link is worth watching to get a glimpse of the very first fully electronic stored-program computer. This is a bit of a fudge with respect to the question, since the Baby wasn't really intended to be used for 'real computing', but as a means to test the use of Williams tube storage.

The Harwell Dekatron is an excellent example of this type of machine, not least because it was designed for simplicity and reliability rather than speed, and this in turn makes it easy to understand. This is a machine that operated entirely on decimal numbers, not on text.

It has a few buttons on its control panel, which are essentially used to start, stop and reset it. It takes all its real input from a bank of perforated-tape readers, of the sort already in widespread use at telegraph offices at the time. These contain both instructions and data for the machine to work on.

Output can be to another paper tape (via a perforator), or to a printer. Another option however is to directly read the contents of the ninety memory words, by observing the position of the discharge glow in each Dekatron tube. Many early computers had an option similar to this, but it eventually grew impractical as the amount of memory increased.

The first computer I built was a COSMAC ELF. It didn't have a keyboard or a monitor, no CLIUI/TUI/GUI. It was a full-fledged digital electronic computer.

It had 8 toggle switches and a pushbutton for input and a dual 7-segment LED display for output.

Before terminals, the most common method of interacting with large electronic tabulators, calculators, and computers (IBM mainframe, et.al.) was via punched cards for input, and line printer output for output. Some minicomputers used punched paper tape instead of punched cards.

The first terminals were mechanical teletypes (ASR-33, et.al.), with a keyboard plus a line-by-line printer above the keyboard. No glass display.

The first personal computers (Altair, IMSAI, KIM-I, Cosmac Elf) had switches on the front panel for input and LEDs for output. A serial port that could connect to a glass terminal was optional.

Besides dedicated LEDs/lights, some of the earlier computers printed out there. In my first programming class, our college had an old PDP-11. Running a program would result in an answer on the printer. For batch programs running on other mini-computers, the output all went to a printer. Fortunately, we were able to use terminals with screens for the actual development of the computer programs, as programming with punch cards (the way of some of the computers of the 50s/60s) would be unnecessarily tedious and error-prone. But it is technically possible to be screenless and just type your answers and get your responses real-time on a printer.

When I started programing in 1974, I had a keyboard, printer, and punch card reader/writer.

Using a command prompt in Windows the text is printed to the window rather than a real printer. Just the way it was.

Early hobbyist computer kits had switches, one set for address, one set to set the value of that address, and two sets of lights showing address/value. The only useful program I saw was tennis.

I used to maintain a sonar system with an embedded computer. While the sonar system was certainly a sensor, and the computer could drive displays, it was also possible (but awkward) to use the computer itself with all the other cabinets shut down. Programs could be entered, single-stepped, or ran by pushing buttons. And results could be read from lights. Each bit of each register was connected to a light which was also a button to change the state of that bit.