Were Mac systems faster than Windows in processing performance? [closed]

This could be due to Mac OS having performance optimizations to run on Mac hardware? As far as I know this has been happening since the first Mac from 1984 (128k) and the release of Windows 1.0 (1985). And in the 1990s, Mac computers usually had slower clock speeds than most standard PC systems,but they were still faster.

This could be due to Mac OS having performance optiminizations to run on Mac hardware?

Artificial benchmarks aside, in real-world applications Macs were generally faster than Windows because the OS was indeed 'optimized' to run on Mac hardware - or more correctly, the hardware was optimized to run a Graphic User Interface. In comparison, Windows had to use whatever hardware was already in the PC, which was generally not optimized for GUI operation.

And in the 1990s, Mac computers usually had slower clock speeds than most standard PC systems,but they were still faster.

Clock speed by itself doesn't mean much, particularly when comparing different architectures. For example a 486SX-25 and 386SX-25 run the same clock speed, but one is several times faster than the other.

The 1990s was a time of very rapid advances in PC performance, so trying to make a valid objective comparison between Mac and Windows in this time period is difficult. However I did find this in the April 1991 issue of Computerworld magazine:- 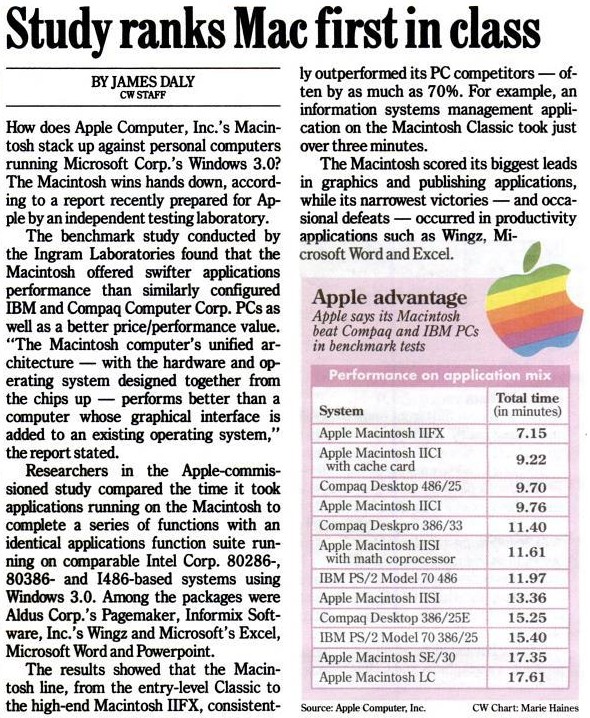 The article claims that "the Macintosh line, from the entry-level Classic to the high-end Macintosh IIFX, consistently outperformed its PC competitors - often by as much as 70%". Notably the 'biggest leads' were in graphics and publishing applications, suggesting that GUI optimization was a major reason for the better performance.

Naysayers may cite CPU benchmarks in an attempt to prove that the PC was actually faster than the Mac, but this actually reinforces the point that GUI-heavy applications ran faster on the Mac despite its 'slower' CPU. That is the advantage of building the GUI into the system from the start, rather than trying to bolt it on later.

But was there ever a time when the Mac was always faster than Windows on an 'equivalent' PC?

But no. Microsoft Windows 1.0 required a minimum of 256k RAM and two 360k floppy drives. So the PCjr couldn't run it. If a version of Windows had been produced for the PCjr its performance would been much worse than the Mac, due to the slower 8 bit CPU. The original IBM PC and PC/XT were not much better (a contemporary review of Windows 1.0 in the New York Times described it as "akin to pouring molasses in the Arctic").

Only one problem. The PC/AT was introduced on August 14, 1984, but Windows 1.0 was released on November 20, 1985. So for nearly 2 years the Mac was indeed faster than Windows on any PC, since it did not exist! But had it been available earlier the majority of IBM machines (PCs and XTs) would have run it much slower than a Mac.

Why Mac systems were always faster than Windows in processing performance?

Mind to give any proof to this claim?

According to various Benchmarks, the PCs usually outperform Macs of the same time.

Results for Whetstones are rather unfair, as already the first PC/XT could feature an 8087 FPU delivering 115 kWhetstones (a PC/AT with 80287 did about 300) where a Mac couldn't deliver more than 15. It wasn't until the 1987 that Apple offered an FPU (68881) with the top line Mac II and the mid 1990s until FPUs were delivered with volume models.

Bottom line: Macs were never faster than PCs of the same time.

If you'll forgive the imposition, I've been on a benchmark hunt. These tend to skew later because they assume some sort of convergence of application support. Of course, in sticking with a CPU benchmark I'm assuming that the interesting case is application software that does a lot of processing.

On the early days of the 68000 versus the 286, I found both Motorola's "AN ARCHITECTURAL CONTRAST: The M68000 Microprocessor Family and the 8086/IAPX 286" and Intel's rebuttal, both predating the launch of the Mac. The Intel response is better for citing Motorola's sources, but I was unable to obtain them online regardless, making the whole exercise very he-said-she-said. But my takeaway was that the 80286 would likely have the edge if it were used properly, though that verdict is muddied by a lot of squabbling about register quantities (68000 win!) versus access scheduling and how much effect wait states have (80286 win!).

Caveat: the 68040 has a pipeline that's about 50% longer than the 486s, neither does branch prediction, and at least Dryhstones aren't very branchy. So the 68040 probably benefits in a way that it might not with actual application code.

In the mid-PowerPC era, I found http://macspeedzone.com which has a few broken links but still contains the relevant graphs for benchmarks comparing:

But in net I think there's enough there to disprove the statement that Mac systems were always faster than Windows. It would seem more likely that they started either at parity or slightly behind, overtook during the 486 era, in theory roared ahead during the very early PowerPC period but was back in a tussle at least as early as the Athlon, and then sank slowly backwards as you head up towards the Intel transition.

With the heavy 'in theory' caveat on the early PowerPC days: in the real world it took several years just to get all the 680x0 code out of the OS, never mind applications. Having a fast processor that spends a decent amount of its time emulating another is only so much of a win.

Although the "computer speed" is totally subjective and all those ***stones are just synthetic tests, let's take this question seriously, but from a different point of view.

There are differences between the Intel x86 and the Motorola 68x family. Motorola has a slightly better performance and can do a few more memory operations than an Intel on the same frequency.

The Windows/DOS combination, at least in Windows 1 you are mentioning, runs in real mode, with almost no benefits of protected mode or 32bit architecture. It locked the whole Windows into the "640kB world, segmented". On the other side, the 68k family was "32bit by nature" with full memory access, so it could do some operations faster.

The other thing is "user feeling". Mac OS had a better-optimized UI, so the user did not notice annoying slowdowns (as in the Windows did).

Are we comparing oranges to oranges?

A difference in the amount of RAM could explain the performance difference.

I recall years ago learning a story that would help explain this.

Macs typically had more memory than their PC counterparts in many colleges(/universities).

Many colleges figured out that PCs were cheaper than Macs. And so they gravitated towards using PCs.

However, certain college programs like "graphics design" and "desktop publishing" reported that Macs provided better performance, and this was really needed for the tasks used by these specific industries. The key reason that the Macs performed better was simply that the Macs tended to have beefier hardware, including notably higher amounts of RAM.

The colleges were able to afford the higher prices for Macs, as long as they weren't buying too many of them. So the college programs that needed the better hardware were supplied with the more expensive Macs which were supposedly necessary, while other departments got cheaper PCs since they weren't crying so loudly about an apparently-justified need for the more expensive hardware. The PCs that ran word processors and spreadsheets could often get by with less RAM, and so the colleges saved money by buying computers with less RAM for the general-purpose computer labs.

The end result is that Macs got a reputation for working better on graphics programs in college. Then, the college graduates went into the industry and told their employers that they were Mac-trained because Macs were better, and so many companies cooperated by getting Macs for the departments that were going to be heavily staffed by such trained graduates.

So, if you want to have meaningful comparison between brands (like Apple vs. others), make sure you know how much RAM were in the machines. If you don't know, then that could very well have likely been the cause of the performance difference.

The users' perception of "processing performance" on Macs vs. Windows PCs is likely influenced by 3 unmentioned differentiators:

For #1, it should not be particularly controversial that the OS shipped with Macintosh computers has, for the most part, maintained a performance advantage over contemporary Windows PCs when viewed through the subjective lens of user experience. An OS "feeling responsive" is mainly an issue of system integration; hardware and software working well together. Since the Macintosh OS has always been able to target a narrower set of hardware variations, this is easier and better achieved than for PCs that must target a much broader range of hardware. Just as is alluded to in the question, "optimizing for the hardware" requires the developers to know specifically the hardware that is being targeted. Since Apple is actually in the computer business, this was always part of their software development "DNA".

Number 2 and #3 are best illustrated through examples, I think. Take Desktop Publishing for the Mac vs. Computer-aided Design (CAD) for PC's. An early adopter of Desktop Publishing applications had a relatively easy choice for a Macintosh. Aldus' products ran acceptably on Macs, and extremely well on Macs specifically expanded for that application, usually with higher resolution displays and plenty of RAM. The exact same can be said for AutoCAD users and PC's. Note that in the AutoCAD case, Windows was not initially a consideration.

The point is the choice of application dictates everything else about the system, including the right OS and the right hardware add-ons. Most AutoCAD users also chose specific graphics cards that included accelerated 2D drawing capabilities and very high-resolution frame buffers in order to get that optimized "processing performance" they needed. Such graphics cards were readily available for PCs to feed this market.

In summary, computers are not just CPU's, which compute certain quantities at certain speeds. They are complete systems of Hardware+OS+applications that are (optimally) tuned for the application workloads that their users are demanding from them. That's sort of why these are called "Personal" Computers to begin with, and why it should be obvious that comparing them based on something as mundane as MIPS or clock speed or numeric benchmarks is just a curiosity and not a recipe for deciding whether a given system is best for a given user.

Not the answer you're looking for? Browse other questions tagged apple-macintosh windows or ask your own question.

20
Was 1991's Hellcats the first instance of incremental screen updates?
8
What was the first computer malware that could infect Mac systems?
21
How and why did Intel make the PCI bus "CPU Agnostic"?
9
What source-code management tools were available for Classic Mac OS development?