Why did some Spectrum games need LOAD "" CODE?

Most ZX Spectrum games were loaded from tape, and the traditional way of starting the loading process (at least in the 48K era) was to type

and then start the tape. This would normally load a small BASIC loader, sometimes containing more sophisticated (and normally faster) custom loading routines.

However, some 16K games (for example, QuickSilva's Meteor Storm) required

to be used instead. I can only remember a handful of games that required CODE to be included - what was the reason for this? Given that it seemed to only be required for 16K games, was it to save memory?

loads a machine code program saved on the tape straight into memory, at the addresses given when using

Doing it this way means you can squeeze the most code into the memory, not wasting any on the loader or a loading screen.

I'd bet on some kind of prehistoric "copy protection", or the oddity of the software house production process.

The most usual way was to have a short BASIC loader (e.g. 10 CLEAR 24899: LOAD "" CODE: RANDOMIZE USR 24900) saved with LINE 10 for autostart after load. The second file was a code itself. BASIC made the necessary operations: prepare the memory space, load the code and run the machine code.

To save "just a code, with autostart" you need to save the code with some system variables. Then you will get something like a "snapshot". You can try it too - try to write something like

and run it. This program saves the whole memory of 16k Spectrum, from the screen through the system variables, the BASIC program itself and a lot of empty space. When you want to load this program back, you have to enter LOAD "" CODE. During load, the computer restores all the variables to the exactly same state as they were in the moment of saving. So the BASIC program will continue directly after the SAVE command. Et voila...

IMHO the main reason was those games were the first games ever wrote for ZX Spectrum and their authors had no "best practices" yet, so they had tried different ways...

It was a vague anti tampering thing although there was no sane excuse not to have had a tiny piece of regular Basic before it.

In most tapes using this "code loading" the actual code is usually only a few hundred bytes. It is actually just the system variables area and the Basic itself so it auto runs similar to Basic . The main erm advantages of a code like this was you could not easily "merge" it to prevent it auto running and because it had the system vars in it , various "pokes" could be applied before saving it too giving it an added layer of protection. Even back then it was trivial to defeat though .

I can't go into huge detail now but on a generic level saving a small Basic program can be done with CODE 23550, length . Getting the accurate length requires a calculation I have but not in my head . 500 will suffice if it's only a few statements.

It is very important to note that the Save ommand for the code itself -must- be followed immediatey by the next command on the same line as when the code is loaded back in it will carry on from there . The easy way to do this is to have the first Basic program line being the actual save ( say line 10 for example ) then the rest of the Basic would start at line 20 . This way when it is loaded back having been saved as code the save has been already executed and the next line to deal with is 20 .

If that does not make a huge deal of s sense try thinking of the small piece of code as a snapshot, although technically it is not it can help explain it.

I am not immediately aware of this method working on other machines although lack of detailed knowledge of other platforms likely explains that.

The panoply of software titles needing LOAD "" CODE to be loaded, is centred around the early ZX Spectrum years, 1982-1984.

While LOAD "" also exists in the ZX81, the technique seems to be a remnant of a wide practice of writing games in assembly together with system variables, for that machine.

That allied with the platform being relatively knew, BASIC offering no intrinsic strong anti-tampering protections, and more advanced BASIC obfuscation techniques not being yet widely known, it might explain placing BASIC loaders in CODE blocks (together with LOAD"" not being yet a de facto standard).

In addition, by loading tape CODE blocks, you can obfuscate somewhat where the execution point takes off. Once the code is loaded, you can continue BASIC execution:

Furthermore, using a CODE block, you can play with variables, like (PROG) and change BASIC location or like ERR_SP, and the BASIC listing (if any), won't have a hint of where the machine code is being entered. Or you can even smash the machine code/CPU stack, and not even return to the BASIC interpreter, using the variable and BASIC area for storing machine code (eg using the address from 16384 as contiguous RAM, if the programmer knows what is doing).

Also, saving as SAVE "" CODE seems to be used in some titles to hide the fact they are in fact, BASIC programs.

By the time the 128K models start to be widespread used, they make it mandatory using a BASIC loader; they do not load automatically a starting LOAD "" CODE block.

Taking the aforementioned METEOR STORM as an example, that has one block of CODE from 23500 with a length of 8700 bytes. 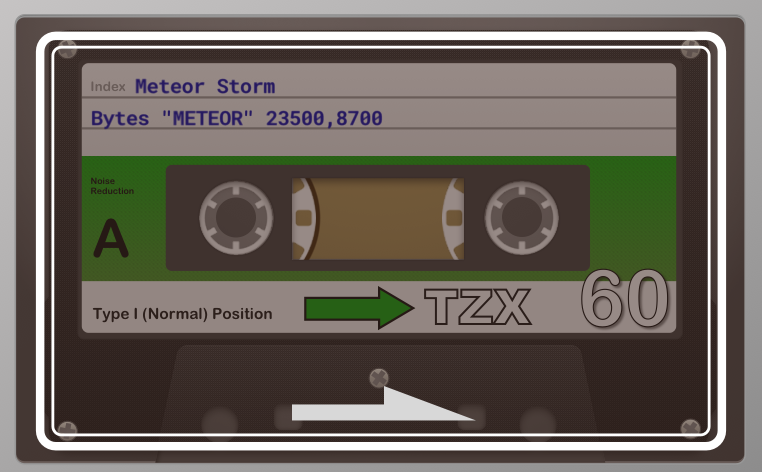 Once the LOAD "" CODE block is loaded from tape, and doing a breakpoint in ROM immediately after, you have got the following BASIC program:

and in the line buffer (E_LINE) memory area:

Analysing the rest of the ZX Spectrum system variables, relevant for this discussion:

There are no integer numbers obscuration, as in later titles, so we can take the ASCII BASIC listing at face value.

For building the METEOR CODE block in tape, that we have today, the programmers:

We can then see, confirmed by the values of the system variables, that the machine will return upon completion of LOAD "" CODE, to the instruction calling machine code at LET L=USR 28000 in line 40.

Not the answer you're looking for? Browse other questions tagged zx-spectrum cassette-tape or ask your own question.

21
How did "full memory" Spectrum tape copiers work?
12
Why did the ZX Spectrum use edges for its tape storage routines?
20
What is causing the problem with the RAM in this (claimed) Spectrum 48k?
3
Sinclair ZX Spectrum with DivMMC load issue
6
Did loadable levels for ZX-Spectrum games contain only graphics / game data, or executable code as well?
5
How did the Spectrum clones with TR-DOS and paged memory load and run code files from disk?
66
Back in 1984 I wrote some games for Spectrum - Will they still be playable?
32
Did computer games for Commodore 64 really take "25 minutes" to load "if everything went alright"?
4
From what errors could Commodore's tape loader recover