Where did the standard arcade font originate?

Nearly anyone who has seen an early arcade game from any company has probably seen this or a very similar font. Who created it and where, and why did it become so widespread, ending up in games from completely different companies?

Hard- and software wise using an 8x8 font is the most simple way to go and to create emphasis making it bold needs the least effort. Within an 8x8 grid, there aren't many ways to create fonts and even fewer bold ones (*1).

When bolding, the font design choice in 8x8 is usually vertical doubling, due the rather upright nature of latin characters. Vertical offers more room while still keeping a recognizable ratio. There is as well not much room for bells and whistles, as the main concern is still readability - after all, it's all geared to make the reader play, not decipher text.

Bottom line: Similarity evolved as a result of restricted resources and desired function.

Which BTW is true for any classic 'font' design - next to all scripts design can in large parts be attributed to the technology used for creation. It wasn't until the movable letter and highres displays that it got freed from such mundane limitations :)

The font issue nothing specific to arcade games, but true for all microcomputers using low resolution displays, with 8x8 being a cornerstone. IBM's CGA gives a great example, as its charset was as well 8x8 and by default available in bold (lower half): 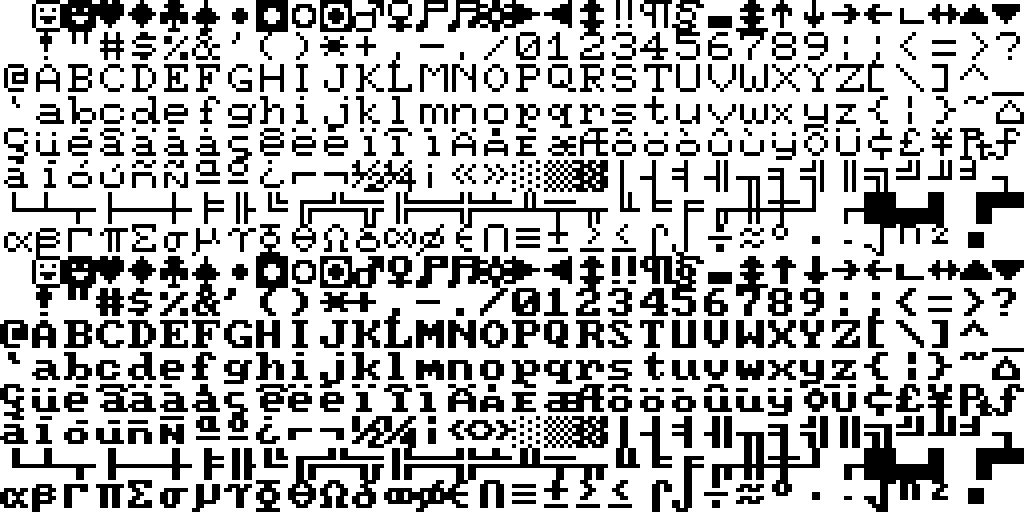 (picture taken and upscaled from https://www.seasip.info/VintagePC/cga.html )

Now, using an 8x8 grid doesn't mean there is not room for variations, above CGA font designers even managed to include basic elements of a serifed font integrated - visible on some of the upper case letters - while the font mentioned in the question and many other 8x8 fonts go for a more simple sans style.

This nice page (supplied by LangLangC) shows a wide variety of character sets used on PC and PC like systems. There are many font variations within 8x8. People invested a lot of time to customise appearance. But when it comes to simple, conventional, easy to read fonts, the limited resources in pixels and shapes make them superficially the same.

In the Sprint 2 hardware design, the text is part of a character-cell based playfield, generated through a lookup into a 512x8b character ROM (actually a pair of 512x4b ROMs wired in parallel, in sockets P4 and R4). This ROM could not be read by the CPU, but fed directly into a shift register which, after being combined with the car sprites, drove the video output. It provided 64 characters, which were used for both the text and the background graphics.

These playfield-generator ROMs appear to have been standard mask-ROM or PROM parts, so their contents would have been specified by the game's manufacturer. I think for earlier examples you should look for games by the same manufacturer. Notably, this cabinet was one of the early applications of the MOS 6502, but it's plausible that an earlier game used the same font but a different CPU.

Dedicated character-generator chips also existed at the time, most notably those made by Signetics - however, these did not use the 8x8 pixel format seen here. The contemporary DEC VT52 terminal did use a 7x7 format (which with spacing was effectively 8x8), but used a thin-line font with a very different appearance.

Not the answer you're looking for? Browse other questions tagged arcade font or ask your own question.

10
"Holographic"/3D arcade games
10
How did the Microprofessor II have space for a Chinese font in the ROM?
25
Details of video memory access arbitration in Space Invaders
38
Why did early arcade games use vertical displays?
5
What did the Datapoint 3300 character font look like?
4
Why was Atari Tank less cloned?
6
Did ancillary LEDs trade arcade game design for manufacturing cost?