What is the analog component of sound output in an early home computer? [closed]

Ask Question
Asked 2 years ago
Active 2 years ago
Viewed 1k times
2
Closed. This question needs to be more focused. It is not currently accepting answers.

For a concrete example, take the Vic-20. It is well documented that the 6560/6561 Video Interface Chip was also responsible for sound generation, having three voices and one noise generator. The pinout of this chip has one pin marked 'sound' which is presumably an analog signal that gets transmitted along with the video output to the circuitry that combines them into an RF signal for transmission to a TV set.

What components exactly are required for handling sound, not in the chip, but between the chip and the TV set? Would these be the same in any early home computer that provided TV output?

Video which was output as Y/C (S video); the S-video was converted to composite video as shown below: 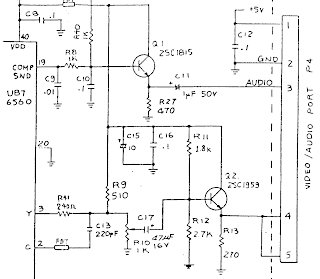 These 2 signals (composite video and audio) ended up on the 5 contact DIN connector.

To connect to a TV, an external RF modulator was required and this was fairly common for the time.

There are plenty of schematics around if you do a quick search.

The difference between the 6560 and 6561 is that one is for PAL and the other for NTSC.

The sound output is passed through a passive low pass filter (-3dB at ~ 1.6kHz to probably prevent high frequency artifacts from the sound generation circuitry being heard) and buffered through an emitter follower (which presents a low impedance source to the output).

The video is also buffered (emitter follower) and has plenty of base drive to ensure a clean output (the output at the connector for zero video is about 2.4V which will be the sync level; the black level for standard composite video would therefore be about 2.7V)

This doesn't answer the question regarding circuit implementation, but the Wikipedia articles on NTSC and Broadcast televistion systems have some relevant background, at least for NTSC used in the US. It's possible that PAL differed or that there were variations to NTSC for other countries, so if one of those is your primary interest please update your question to clarify.

The RF signal coming out of the computer is the same as would be used to broadcast from a station antenna, only much much weaker. Or better to say: the computer's output signal is like what the television would receive from a nearby television station if it were broadcasting on Channel 3 or Channel 4.

The audio signal modulates the frequency of a separate carrier near the video channel. In other words, the circuit would be that of an FM transmitter for a frequency offset from the channel 3/4 video frequency. Specifically, the audio broadcast for Channel 3 is 61.25 MHz + 4.5 MHz = 65.75 MHz and for Channel 4 the FM signal is at 71.75 MHz (up 4.5 MHz from the 67.25 MHz AM video carrier).

There may have been a fairly standard implementation used across home computers but I'll leave that to other posters if so. There are a number of pictures of RF modulator circuits on that article I found via a page on the Sup'R'Mod modulator.

The BBC Micro simply led the sound output to an internal speaker. On the circuit diagram, the output of the 76489 sound chip and the optional TMS5220 speech synthesiser are mixed, low-pass filtered and amplified through a series of ordinary op-amp based circuits. There is also a take-off, just before the final amplifier, to an external output jack.

The Sinclair ZX Spectrum, for example, has the most simple analog circuit you could see in the early 80's home computers.

The ZXS uses only one bit for a sound generator (and for tape output). In the Issue 2 schematics, you can see the whole sound circuit in the upper left corner: It's the speaker and two diodes. (Speaker is an inductive device, so you have to protect digital circuits from the inductive flyback with a flyback diode.)

Later issues (e.g. 4a / 6a) adds a transistor as a simple current amplifier.

A little bit sophisticated was a "line output" (EAR): the same line was isolated with capacitors, creating the simple low pass filter to modulate a square signal from ULA, adapting it for tape recorders.

Not the answer you're looking for? Browse other questions tagged hardware sound or ask your own question.

47
Why did the IBM PC need a sound card?
3
Can't get the AY-3-8913 sound chip to work with my z80 (added schematic)
0
The earliest a home-computer or home-robot could be interfaced with a commercially available camera?
8
Was the output of the C64 SID chip 8 bit sound?
7
What was the first PC/computer to have sound recording & playback support?
1
How does the ZX81 ULA generate a full ROM read address?
24
Was it possible programmatically to manipulate the volume as well as the pitch on computers with no sound chip?
28
What really is a sound card driver in MS-DOS?