Using & Programming the Epson HX-20 Portable Computer by Eric Balkan has a tantalising passage on p. 172*:

T.L. Ronson of the HX-20 User's Group also notes that a monochrome monitor can be hooked directly to the RS-232 port of the HX-20. Contact him for details.

As Balkan's book was published in 1985, it is hardly surprising that Ronson's way of doing this seems lost to posterity. But I wonder if anyone else has tried and succeeded at something similar, or might have enough understanding of what an RS-232 port is capable of in general, or the HX-20 in particular to be able to say how a monochrome monitor connected to an RS-232 port might be coaxed into working as a display.

It sounds like it can be done 'directly' (ie with a single cable?), though I imagine some code would be necessary to get it to work (the HX-20 allows direct machine code input via its own Monitor function).

For clarity, I am not talking about using the official serial-to-PAL adapter box (the display controller), or the one made by the company Oval, and is described on pp.171-172 immediately preceding this passage, but am interested in Ronson's "hack" to connect a monochrome monitor to RS-232.

I have experimented by connecting a DIN cable I have, which I use to connect my Soviet ZX Spectrum clone and my Elektronika BK-0010-01 to my monochrome Elektronika MC-6105-01 monitor, I know that only two of the five DIN pins of that 5-pin DIN connector are used to connect to the monitor. Once connected I tried each of the following commands on the HX-20:

(These are supposed to display text and graphics on the internal and external displays in different combinations).

For each command, my monochrome monitor did react, briefly turning on the screen to display greyish flickering, before switching off again, at which point the HX-20 threw:

About which the manual says:

DU: Device unavailable. A device which is not connected to the HX-20 is specified.

But the reaction of the monitor to try to display something gives me some hope that communication between the RS232 and monitor might actually be possible.

* This passage comes right after a description of the official serial-to-PAL converter, so it does not reference that device, but is given as an alternative.

No, it can not. The interface hardware is not able to generate a valid TV signal.

Beside all the technical reason, what reason should Epson have go the length of developing a display controller (and Epson UK offering a third party controller), if everything needed is already build in?

As Ross Ridge already mentioned, this most likely references to the H00DC-IA Display Controller Epson offered:

The Display Controller is a box about 5x15x25 cm in size with connectors for power, Serial Bus, Composite Out and TV out. It is a genuine Epson product, not to be mixed up with the Oval HO-20 sold in the UK (see below). It outputs a 60 Hz NTSC compatible signal. The hardware is based on a (nother) 6301 CPU with a 6847 VDG, 2 KiB of Video RAM and a 4 KiB character ROM.

The controller is connected via the 5-pin SERIAL bus, which it could share with a floppy drive named TF-20 (5.25"; 320 KiB; CP/M format). See page 65 of the manual. I have no idea if there were other devices for the HX-20, but the bus is compatible with the PX-4/8 SERIAL (both can use the TF-20) which had printers supporting this protocol (*2).

The serial bus is looped thru the devices and operates at 38,400 bps. The connector is a 5/180° DIN like used for PC keyboards or MIDI.

PIN/POUT are used as handshaking to define who's talking. AFAIK it's not used - in fact, the Display Controller does not forward PIN from a subsequent device.

Beside original controller, there were as well compatible third party products, like the Oval HO-80 which was even sold by EPSON UK. Unlike the Epson product can it produce 50 Hz frames as well as PAL modulation. 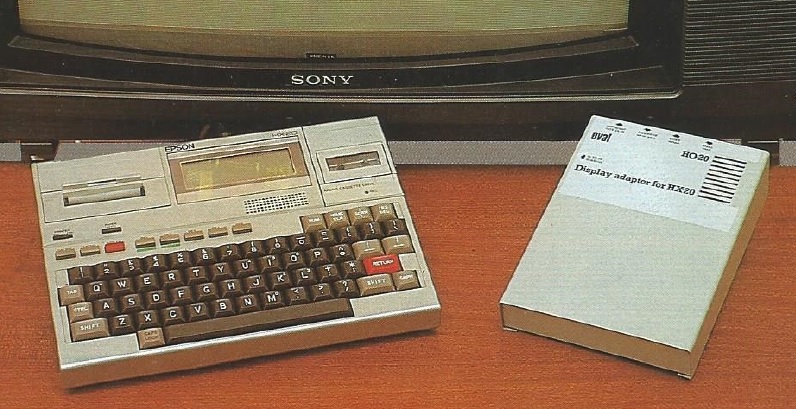 Software wise they are compatible, but the HO-20 seams to offer additional modes for higher resolution as well, as I found a a note in one of the marketing brochures, but no further data.

The well known Norbert Kehrer did develop a quite useful emulation of setup of 4 drives and a display controller under Windows called FLASHX20. One rather great feature is that all access is done on logic level. Files are not managed in any special format, but as regular files on your disk drive. THere is a directory for each of the four emulated drives. Copying to a HX-20 'disk' (or back) is done by simply moving it into the directory. A RasPI based Linux version is announced, which would allow creating a handy storage and display box.

Another PC-based emulation was created by Martin Hepperle about a year ago.

Similar interesting, albeit older is the (DOS) program called PX8VFS which emulates a set of compatible disk drives which should as well work with the HX20.

A good workaround is to use a terminal or PC as a "soft-printer" for listings while edititng, or even ascii up/download over the serial line (the slower port, max 4800bps). The basic is well equipped to handle this, if xxxx is your line parameters (see the manual)you simply LOAD "COM0:(xxxxx),A" to receive ms-dos format textfiles from a terminal program at the other end. you do need per-line delays though or go down to about 600 bps. LIST"COM0:(xxxx)" lets you save into the pc terminal programs capture buffer, or set it the pc side to ascii download.

just maybe this is what they did, use a serial terminal. It is easy from basic as well to OPEN #1,"COM0(xxxxx)" PRINT#1"whatever" CLOSE#1

I modified a chess.c4 variant this way to display on a vt100-compatible terminal program (xterm) on the pc-side.

Directly drive a monitor from the serial would require bit-banging at video speeds, this sounds very hard in deed.

I have Video Adapter in HX-20 Expansion Unit case, with RF-out and TV-out

Not the answer you're looking for? Browse other questions tagged crt-monitor rs232 hx-20 or ask your own question.

11
How do serial (user port) adapters achieve speeds above 1200bps in C64?
8
Examples of usage of secondary channel on 25-pin RS232 serial port
14
Interfacing with vintage Canon monitor
6
Hercules to COM<->USB adapter - is it possible?
6
Could monochrome systems produce better output for monitors than TV sets?
0
What's the name of this CRT monitor?
12
What was the very first device to have an RS-232 serial port
5
How can I send RS-232 serial data to a Tandy plotter reliably?
9
How can I connect a Psion Series 5 PDA to a 64-bit Windows PC?