The ZX80/81 16K RAM pack used two PCBs joined with a connector in the middle.

I'd initially assumed this was due to reuse of the original 3K RAM pack case (which has a single PCB and uses static ram) for ZX80 16K RAM packs and then the same case being used for the ZX81, however the case is significantly different and I think there wasn't enough space inside the older design.

I can't figure out why Sinclair didn't create a RAM pack with physical packaging similar to the Memotech design. A single PCB should be more reliable and the additional plastic cost of a wider case can't have been that much.

I remember there was an initial shortage of 16K RAM packs at the ZX81 launch, I originally ordered a ZX80 and received my ZX81 before the magazine reviews arrived but had to wait several months for a RAM pack, which leaves me wondering if there was some manufacturing issue.

Is there some piece of Sinclair history or electronic reason I'm unaware of?

It was neither due history or electronic but for design reason:

The 16 KiB RAM pack was intended to be sold to existing (and new *1) ZX80 users as well. While both had their expansion port on back side, the ZX80's was all the way to the left, while the ZX81 got it moved over to the right side. Only a package not much wider than the connector would fit both equally well. 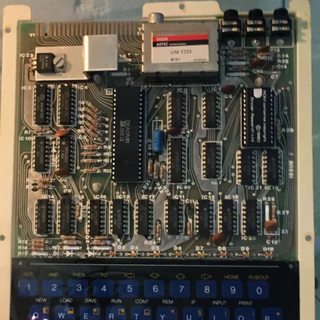 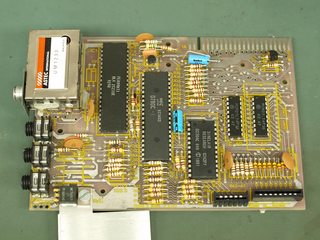 This is as well why the connector itself is 'open' on both sides, unlike most other PCB plugs. It needed to fit both board cutouts equally well - and in addition, the opening of the ZX80 was a bit smaller.

The same goes for making it the 'straight' way it is, compared to Memotech's more elegant shape, as the ZX80 didn't have that wedge.

Not the answer you're looking for? Browse other questions tagged zx81 sinclair or ask your own question.

29
Why did Sinclair choose the Z80 for its range of home computers?
17
Why does Sinclair BASIC have two formats for storing numbers in the same structure?
6
How did the ZX80 RAM pack use DRAM?
29
Why did the ZX80 CPU run at only 3.25 MHz?
2
Did the ZX80 RAM pack pass the expansion bus through?
3
What does the ZX81 ULA use A14 and A15 for?
8
Why did the Sinclair QL keyboard lack a Delete key?
5
Are all 64k x 4-bit ICs interchangeable for Amstrad-era ZX Spectrum 128k +2/+3?
19
Why does the ZX81 not have user definable characters without extra hardware i.e. why could the character ROM not be in RAM?
9
Can you switch the ZX81 ROM to RAM w/o write protecting it and still use ZX81 BASIC?