How can I make an external PSU for an Apple IIc?

I purchased an Apple IIc from an auction site, but it came without the external power supply unit. While this question and its answers describe how to open up the IIc and use alligator clips to power it from a bench PSU, I'd like something more convenient and portable. What are my options for this?

Though on page 11 of the Apple IIc Technical Reference Manual it says that the internal power supply "operates from a 12 to 15 VDC input source," this is actually too conservative. Page 234 of that manual gives the correct specifications: the system unit accepts an input voltage of "+9 to 20 VDC" with a maximum power consumption of 25 W. I have been using my IIc with 20 V input with no problems.

Conveniently, a lot of modern laptop PSUs provide voltages in this range, and also work on any wall voltage from 100 V to 240 V, 50 or 60┬ĀHz. I have several Lenovo ThinkPad PSUs used with older X200-series laptops (and many other models) with a rated output of 20 V 65 W, so I decided to use one of those..

You'll obviously need an adapter to convert the laptop PSU output to a female 7-PIN female DIN plug. Fortunately Lenovo changed their PSU connector at some point causing people to sell converter cables into which you can plug the round connector from an old PSU to convert it to the new square connector. From AliExpress I bought I this adapter (under $1), and also a 7-pin DIN plug with a female insert here (under 50 cents). (Actually, I purchased several of each in case I messed something up.)

Building the adapter was relatively simple, but needs some care to ensure you're connecting the right pins, and that pins are not shorted.

Here's a picture of the assembled adapter and the parts used to make it (click on the image to see a much larger version): 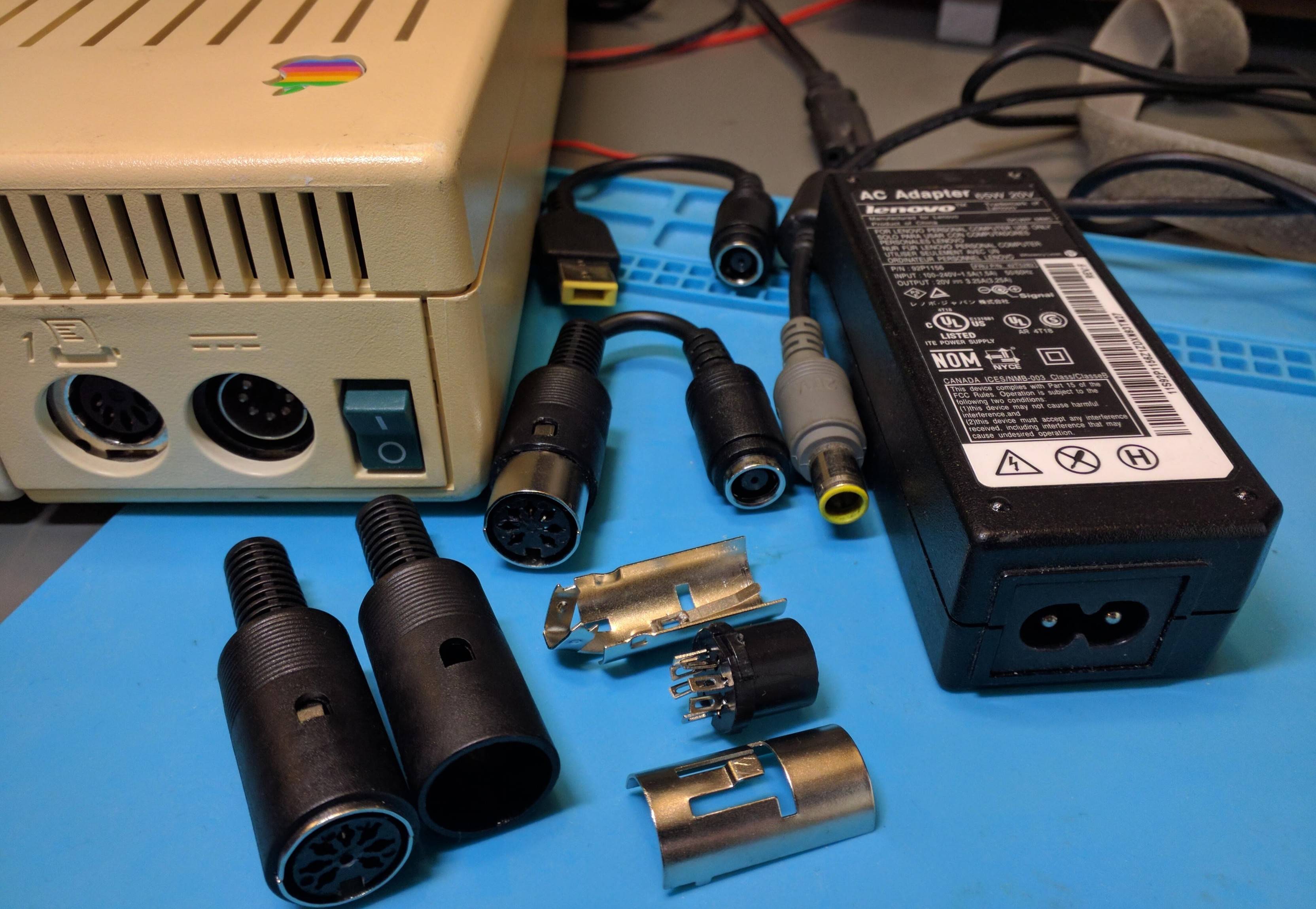 In the foreground at the left is an assembled DIN plug; to its right is a DIN plug cover and the plug itself between the two parts of the metal shield. Above these, from left to right, are the back panel of an Apple IIc (the external power jack is next to the power switch), the assembled adapter, the plug from a Lenovo PSU, and the PSU itself. Behind the assembled adapter is the original Lenovo-old-style to Lenovo-new-style adapter that I cut apart to make my adapter.

Not the answer you're looking for? Browse other questions tagged apple-ii power or ask your own question.

9
What's the best way to hook up an external power supply to the Apple IIc without a 7-pin female DIN plug?

3
External power supply for 16.5V portable computer (Zenith SupersPort 286e)
14
Was the Apple II ever sold in kit form?
8
Can a standard ATX power supply be used on a Macintosh Performa 476?
4
Apple II Plus modifier key doesnŌĆÖt work
5
How to test an Orange Micro Grappler+ card?
22
Why did Apple remove booting from external drives in later IIc ROM versions?
9
What's the best way to hook up an external power supply to the Apple IIc without a 7-pin female DIN plug?
12
What are my modern options for loading programs and data files on the Apple IIc?
22
How does the C64 get an accurate TOD clock on both 60 Hz and 50 Hz power?