I used to wonder why different versions of Basic on 8bit machines would impose different limits on the highest line number permitted.

I should point out this excludes any trickery to manually change a line number to an otherwise inaccepted value ( line 0 or 10000 in ZXBasic for example) yes I am well aware and used to use such tweaks myself :D It would be off question to go into it being stored twice anyway.

From my memory Locomotive Basic as used on the Amstrad CPC machines accepts up to 65535 which is logical as for storing a number > 255 one would usually use two bytes, a low and high byte.

This brings me onto the question itself , BBC Basic on the Model A and B at least are limited to 32767 and ZxBasic is limited to 9999. I have not looked into what other platforms limit this as and I am not asking for a list :)

Question really is why impose these ( what appear to be ) artificial limits when they are if I am correct stored as two bytes anyway giving a range of up to 65535 ?

I cannot fathom any likely design reason for it and given the variances in displays between platforms in general it is nothing to do with neatness, besides Basic statements spill quite messily anyway it's part of it!

The answer is pretty straightforward: 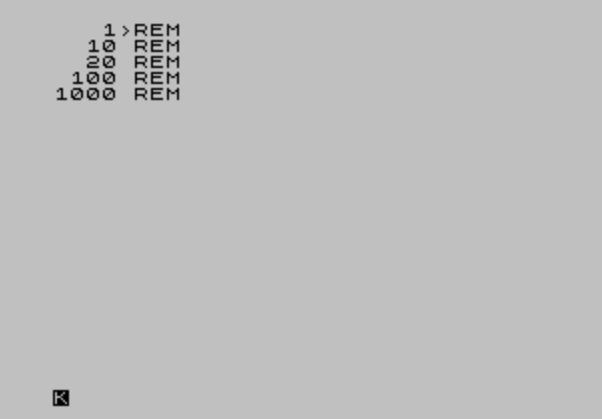 In the first two cases, it is the consequence of internal number handling. ZX Spectrum has a minimalistic approach, so the "4 digit" is, in my opinion, a fair trade-off between the lines count and line length...

With so many different implementations of BASIC a comprehensive answer is difficult. So here's the limits for TRS-80 Model I and III BASIC (written by Microsoft).

Line numbers are stored as a two byte word but the largest allowed by the input routines is 65529. Primarily because this is an easier limit to test rather than checking for overflow. The line number is converted from ASCII to binary a character at a time using a pretty standard algorithm. Start with a 16 bit value line = 0. For each digit multiply line by 10 and add the digit to line.

To check if the line number is acceptable, compare line against 6552 before multiplying it by 10. This will guarantee the value is <= 65529 because a digit can add only 9 at most.

The Model I/III processor is a Z-80 which has no hardware multiply instruction. Checking for carry after each step in the multiply by 10 code would require 4 branch instructions (and one after the digit add) whereas the comparison as written is only one. ROM space was at a premium so losing a few line numbers was worth the space savings.

$FFFE (65534) triggers a reboot in the error message routine. This is only used at startup when the ROM asks Memory Size? allowing the user to set the top of available memory. If an address too low or too high or an invalid number is entered the error routine is called which must reboot since BASIC hasn't been fully initialized.

On the original Dartmouth Time-Sharing BASIC (circa 1964), the maximum line number was 99999.

Dartmouth Time-Sharing ran on a hybrid Datanet-30 / GE 235 system. The Datanet-30 could communicate with up to 128 terminals at once, and handled the I/O. The GE 235 was better at computation and was responsible for executing the BASIC programs.

I have actually looked into this in some depth. All major variations of BASIC that I can find source for store the line number as an int.

This includes even Tiny BASIC, which used a single unsigned byte, as one could not type a program with 255 lines into their target machines (4k total memory) anyway. All others that I have looked at - Altair, MS 6502, Atari and BBC all used a 16-bit int.

In Tiny, the only parsing completed on the line at edit time was the line number. All of the rest of the line was left in its original text format. MS parsed the number and the first token of every statement, the rest text. Atari parsed the entire line into tokens - I can't recall what BBC did.

Almost all BASICs reserved one line to indicate "immediate mode", lines entered without a number. This was often 0 or -1, although I recall others being used as well. This often resulted in two lines being set aside, -1 and zero being illegal in the parser.

Atari used a signed int and made everything -ve as immediate mode. In practice, you can only have a single immediate mode line, so that was -1 (or as in some books, 32678). Zero was allowed. I'm not sure why they did this, as there was no 16-bit math package or such, and using 0 or FFFF for immediate seems to be a better solution.

I have written a BASIC parser in lex/yacc with the express intent of checking what ranges programs actually use.

BBC BASIC V, as used on the Acorn Archimedes, had a maximum line number of 65279 according to Matt Godbolt's analysis of the tokenised file format.

Each line is stored as a sequence of bytes:
0x0d [line num hi] [line num lo] [line len] [data...]
The line number is as you’d expect — the line number — with one exception. The maximum line number is 65279 (0xfeff) as the special marker 0x0d 0xff is used to signify the end of the program. The line length includes the three preceding bytes, making the maximum length of a line 251 bytes.

In the 8-bit versions of BBC BASIC (checked on a BBC B and BBC Master emulator), the maximum line number that can be entered at the prompt is 32767. Higher numbers result in Syntax error.

The Standard Line Editor requires each line of a program to have a line number for editing and reference purposes (labels are available too.) Line numbers may range from 0-65534. Each line can be up to 250 characters long

Although it may have other uses, line number 65,535 seems to be reserved for nuances in error-handling:

ON ERROR GOSUB 65535
Enable user disk error trapping. Errors are returned using the ERROR function. You must check for errors---ZBasic will not when this parameter is set.

ON ERROR GOSUB line
If a disk error occurs the program does a GOSUB to the line or label specified.

ON ERROR RETURN
Disable user disk error trapping. ZBasic will trap the disk errors and give error messages at runtime.

The ON ERROR GOSUB 65535 variant seems to be similar to ON ERROR RESUME NEXT in Visual Basic, meaning: "don't complain, I'll check the error-code myself (if I can be bothered)".

Donald Alcock's, who treats "the need for portability as an axiom", wrote in Illustrating BASIC (Cambridge University Press, 1977):

The Oric Atmos manual confirms this on page 15:

Some comments in the Oric disassembled rom seem to indicate that high byte 0xFF is reserved for in-line mode:

The part that checks for that limit is probably here:

Note that those properties (direct mode & multiplication by 10) are very similar to TRS-80 Microsoft basic as exposed in another answer.

4
Simulate Repeat/Until in BASIC, and on a single line?
25
Why does this BASIC program declare variables for the numbers 0 to 4?
9
String libraries for BASIC
15
How was a line of Commodore 64 BASIC code stored in its memory?
28
Why did 8-bit computers choose BASIC dialects as "de facto" command-line interface, instead of contemporary Shell/Lisp dialects?
5
Does Sinclair Spectrum BASIC have a maximum length for one line?
0
Behaviour of commas in PRINT at a line-end
15
GOTO (etc) to a non-existent line?
3
MECC basic standards document?