How did the 6502 ALU perform a decrement?

Assuming that this diagram is correct: 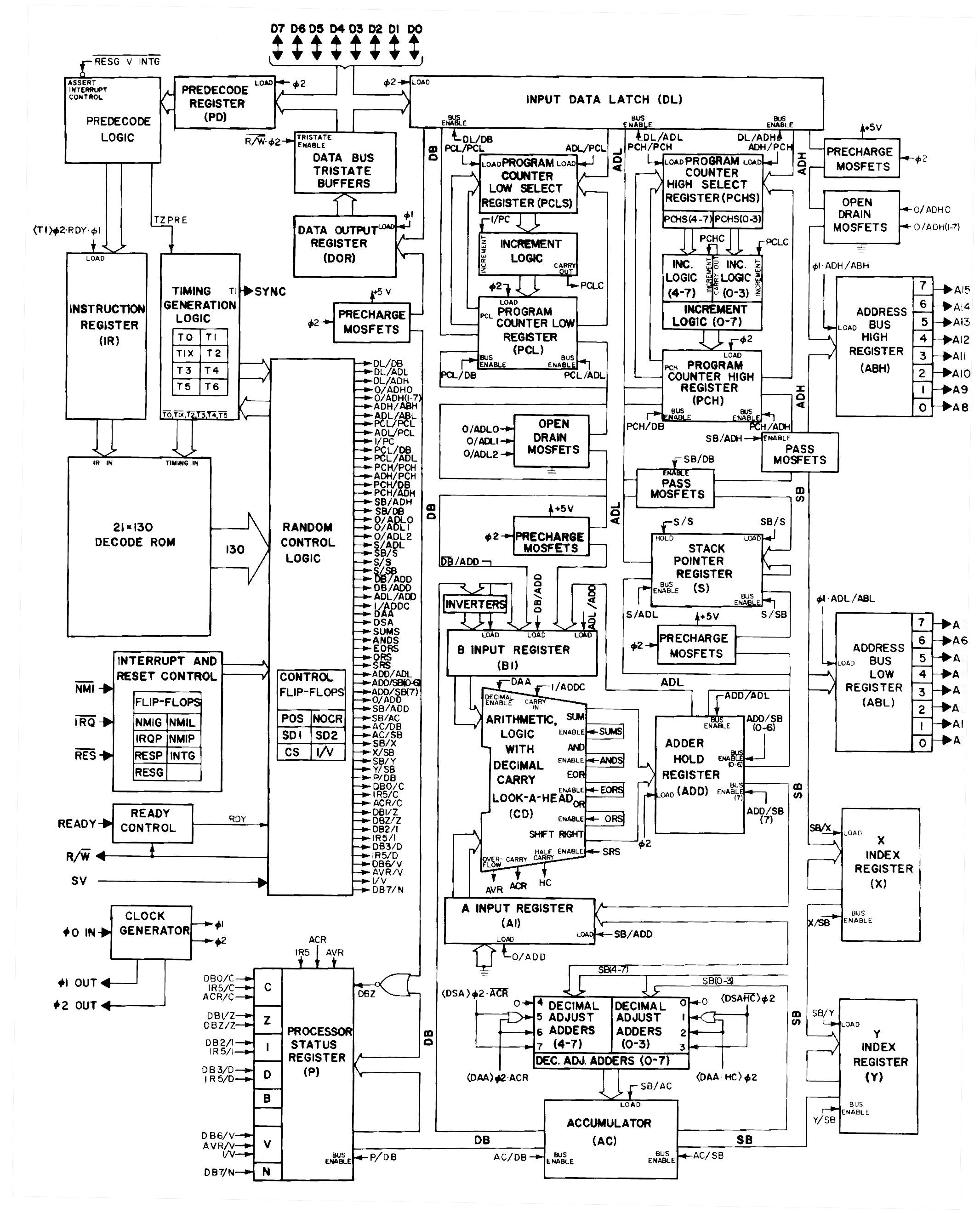 Instructions like INC, INX, and INY can easily perform increment using ALU sum with data on B input, 0 on A input and carry_in set.

But how do instructions like DEC, DEX and DEY work?

It can decrement by adding -1 which is $FF, and it can have $FF by inverting 0 BUT 0 can only be set on A input and inverting can only be done on B input.

So how does it perform a decrement?

But how instructions like DEC, DEX and DEY works ?

By adding $FF provided by the precharged internal data bus to the register content.

While using the precharge to supply a $FF constant is a real nifty feature, it's more of a hack based on a side effect to speed up NMOS operation.

The precharge exists due the way MOS-FET and NMOS Logic work. Effectively each FET (and line) is a (comparable) large capacitor. Loading and unloading takes time in relation to resistance in the circuit. In NMOS logic the transistor is placed between the output and ground. On the other side the output is connected to Vcc (+5V) via a resistor.

When the Transistor switches on, the output is grounded with a very low resistance, puting the output extrem fast toward Low. When it's switched off, the output is loaded via the resistor. Thus changing the signal output from Low to High takes considerable longer than going from High to Low.

By precharging lines with High value ahead of time and then pulling them down when a signal is to be transmitted, minimizes switch time to the lower of both, resulting in faster operation.

Background 2: Use of Precharge for Constant Generation on 6502

On the 6502 precharge is thus present on all 4 internal busses (DB, ADL, ADH, SB). Beside providing $FF for decrement on DB, it's well used on ADH and ADL to generate constant values:

Another special use is with transfering ALU results to SB. The ALU does not shift-in Carry on a ROR, but always sets bit 7 to Zero. So when the ALU result is transfered after a ROR, bit 7 is only transfered if carry was cleared. Otherwise transfer for bit 7 is supressed, replacing it by a precharged One.

Precharge behaviour is a major reason why the 6502 is not static, as the precharged values will vanish after some time, making many operations invalid.

It has been asked where the signal names originated. They are taken from the famous Hanson diagram - as cited by the OP (*3) - which is nowadays the de-facto standard for interpreting the 6502 (despite having a few little inconsistencies; *4). It was part of an equally famous 1995 article by Mr. Hanson about making D-Latches in VHDL. To my knowledge the diagram was first drawn up in 1982 during studies of the original 6502 blueprints.

The names are rather straight forward, like Y/SB meaning connect Y output to Special Bus (the register data bus), or SB/Y to enable loading Y from SB. Next to all modern sources use these names, or derivations thereof. Most notable maybe the Visual 6502 simulation (used in DPcontrol output; see the nodenames.js source for all names used; *5).

*1 - Note the Prechage MOSFET box in the top left quadrant, beside DB, right below the Data Output Register box

*3 - Please use, whenever possible the cleaned up version provided by Mr. Hanson at http://www.witwright.com/DonPub/6502-Block-Diagram.pdf. The often used copies of copies of scans are quite ugly and hard to read.

*4 - For example there is a signal generated if DB is negative or the flipflops shown as part of the logic don't fully add up, but these are details that only come up when trying to recreate the CPU.

32
What is the relative code density of 8-bit microprocessors?
17
6502 branch offset calculation
10
What was the main purpose of bitshift instructions in CPU?
17
Why are PDP-7-style microprogrammed instructions out of vogue?
16
Has there ever been a instruction set architecture that did not require instruction decoding at all?
24
Why didn't the 6502 have increment/decrement opcodes for A?
6
Is there a CPU ISA preferring a test for the value of one over testing for zero?
1
74'181 missing zero flag but strange -1 (or all 1) flag, only makes sense in active-low mode?