Why did 1-bit DRAM chips have separate data input and output? 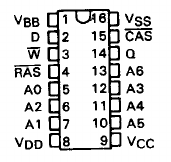 Computers such as the BBC Microcomputer, the Comomdore 64 (some revisions), and the ZX81's external 16K expansion used 1-bit DRAM chips with the data inputs and outputs wired together, and to a bidirectional data bus.

Wider (4-bit an 8-bit) DRAM chips didn't bother using separate input and output pins, possibly due to the larger number of pins that would have been required if they chose to do so.

Given that these machines made no use of the separate data inputs and outputs, I'm wondering why they were ever provided in the first place.

Can anyone explain how separate data inputs and outputs for RAM would be useful for a computer system designer?

Examples of machines that took advantage of this would be appreciated.

As an example, I'll put again schematics of a russian ZX clone, for example this one, named "Leningrad". All other clones with single DRAM set are made in a similar way.

The inputs of DRAM chips (D21..28, labelled as 565RU5 -- russian analog of 4164) are connected directly to Z80 databus (D0..7). This means that CPU writes are processed directly to the DRAM, while at all other times (for example, ROM or IO access) DRAM chips won't disturb CPU bus and even could be read by video fetcher in parallel.

The outputs of DRAM chips are connected to the private bus (MD0..7), where the video data is taken from directly to the pixel shift register and attribute latches. The CPU reads are, however, passed through the D32 '373 latch, that temporarily connects both buses together.

If there were no separate input and output pins in the DRAM chips, the design would contain another latch for write data. Alternatively, where the explicit separation is not needed, having two pins does not hurt either.

Can anyone explain how separate data inputs and outputs for RAM would be useful for a computer system designer?

There are several advantages:

In addition it reduces the pincount quite a lot:

Thus even a 256 KiBit chip could be made into a 16 pin device (*2) keeping the pinout (mostly) compatible. It wasn't until the 1 MiBit that a new pinout was needed - which, as usual, did lead to some variation.

Bottom line: That way a RAM chip is just that, a RAM, without any additional circuitry.

Wider (4-bit an 8-bit) DRAM chips didn't bother using separate input and output pins, possibly due to the larger number of pins that would have been required if they chose to do so

Yes, as that would have pushed the pincount up to 22 for a 41464, which is rather unusual for 600 mil spacing, thus a switch to 600 mil would have had to follow, eating up much more board space, increasing cost further. Quite unhandy when considering that these x4 chips were mainly intended for cost reduced designs of conventional micros. Thus a reduction to only bidirectional bus designs was acceptable.

Examples of machines that took advantage of this would be appreciated.

There are not many with classic microprocessor designs, as they work with bidirectional busses anyway.

I once (~1983) did a video capture board using separate, not connected D/Q pins, working on a fixed (TV) timing frame(*3). Data input was continuous feed from an AD stage digitizing camera input and stored in RAM (/WR active). At the same time data output was feed synchronous feed into a DA stage creating output for a monitor (*4).

While WR was active, each frame was stored, overwriting the previous. By releasing WR (during retrace) the last picture stored was held, continued output displayed, and on demand transferred (*5) into the PC.

*3 - Simply created by some counters triggered by filtered camera timing, so no internal clock source needed.

*4 - Well, since the system was meant to take employee photos, there were two screens, one 'regular' for the operator and a second with flipped Y axis to act like a mirror :)

*5 - Using a separate set of address counters and during retrace to not interference with the picture still displayed. It could have worked by reusing the picture counters, but that would have introduced a one frame flicker, which I did not want to happen, as it disturbs the UI process.

(processor write-only) Video frame buffers are another example of something where unidirectional data buses might be used.

Example of a machine that tooke advantage of this

The Apple Macintosh IIfx used a special kind of memory modules with separated data input and output lines for all data bits. This allowed the designers to pipeline bus cycles (like continuing a write to RAM while already doing the next transaction on the bus or addressing the RAM while the previous transaction is still running) without the need to introduce dedicated tristate buffers for the RAM.

Example of another device that took advantage of this

This design was likely common in PC-type computers, as the 30-pin SIMM standard follows this pattern: combined DQ pins for the data bus, but separate D and Q pins for the parity bit.

I own 4 30-pin SIMMs that are of sub-standard quality and short Parity D to Parity Q internally on the module. They contain three 4Mx4 chips for a 4Mx12 array and 0-ohm solder links to pick any 3 bits from each of the chips to provide a 4Mx9 interface to the computer. I used them in a 486 computer for a short time, where there were no issues with the parity bit (no surprise, as parity bits are part of the 486 front-side bus, so putting these bits on the bidirectional bus makes absolute sense).

I found out about the non-conforming module only after taking a deeper look into them because they corruptes data bits during normal operation. I am quite confident that the 4Mx4 chips on that module are relabeled factory rejects.

Not the answer you're looking for? Browse other questions tagged ram design-choices or ask your own question.

6
Why are RAM chips 1 or 4 bits wide?
6
Why did CGA RGBI output leave DAC to the monitor?
3
How long would a 41256 take to do 4 accesses in fast page mode?
3
Why did IBM 7030 or IBM 360 use byte and word addressing simultaneously
2
Why did IBM System 360 have byte addressable RAM
22
Why did mainframes have big conspicuous power-off buttons?
27
Why did old IBM-PC-compatible computers only have 16 colors available?
4
Why did the Speak & Spell have an alphabetic keyboard?
25
Why did the stock Amigas not have a battery for keeping the time/date?