Apocryphal (?) tale of hard drive platter propelled through a wall?

In the mid-1990s while a student at a US university during a computer science lecture, my professor (not a TA or grad student) told us a story of "witnessing" a large, then old-fashioned metal hard disk platter somehow breaking free of its mounting while spinning and thus flying through the air to embed itself violently halfway through one of the walls of the room.

The unfortunate hard drive in question was a cabinet-sized device. But not a tape machine.

At the time, I don't recall any questioning of the veracity of this story, but in hindsight it sounds pretty fishy. IIRC the point of the story was something about information density and how then-modern (1990s) hard drives were so much smaller & more capable. So it might have just been a convenient way of making his point. Or at least an embellishment. I'll allow that it could have been passed down and not meant as an outright fabrication but was still presented as a real event.

Doing some web searches turn up nothing. On the other hand... can't prove a negative.

Are there any convincing or reliable accounts of an incident like this? I guess the alleged event would have taken place between ± 1975-1990 based on what I think my prof's rough age was at the time.

There is also this tale that I read recounted in Philip and Alex's Guide to Web Publishing, although the disk pack was intentionally hurled through the wall in a fit of temper: 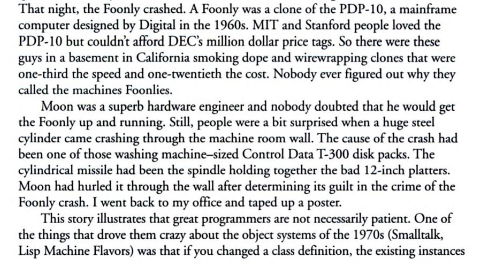 That night, the Foonly crashed. A Foonly was a clone of the PDP-10, a mainframe computer designed by Digital in the 1960s. MIT and Stanford people loved the PDP-10 but couldn't afford DEC's million dollar price tags. So there were these guys in a basement in California smoking dope and wirewrapping clones that were one-third the speed and one-twentieth the cost. Nobody every figured out why they called the machines Foonlies.

Moon was a superb hardware engineer and nobody doubted that he would get the Foonly up and running. Still, people were a bit surprised when a huge steel cylinder came crashing through the machine room wall. The cause of the crash had been one of those washing machine-sized Control Data T-300 disk packs. The cylindrical missile had been the spindle holding together the bad 12-inch platters. Moon had hurled it through the wall after determining its guilt in the crime of the Foonly crash. I went back to my office and taped up a poster.

This story illustrates that great programmers are not necessarily patient. One of the things that drove them crazy about the object systems of the 1970s (Smalltalk, Lisp Machine Flavors) was that if you changed a class definition, the existing instances

Some "informed speculation" based on my "day job" which involves worrying about containment of rotating objects if they break (specifically, rotating parts inside jet engines)

The rotating parts of early disk drives were substantial objects. For example the IBM 350 had 24 inch diameter platters rotating at 1500 RPM, with a rotating mass of about 10 pounds. That means the outer edge of the disk is traveling at about 100 mph.

So it's conceivable that a 10-pound rapidly spinning object could have launched itself across the machine room at say 50 mph. I guess that could make quite a dent in flimsy office drywall.

Whether this ever actually happened is another question, of course.

As an example of how much damage this sort of thing could cause, there is a nice piece of evidence preserved in one of our works test facilities. On one test failure, a similar sized piece of metal came loose, though it was spinning at nearer 10000 RPM than 1500 and the axis was horizontal not vertical. It smashed through a quarter-inch steel plate that was supposed to contain it, hit the brick wall of the building, and because of its rotation climbed up the wall, ran across the ceiling, down the other wall, and across the floor.

It made three complete orbits of the room before gravity finally took control, it lost contact with the ceiling, and came to a stop. The marks on the walls and ceiling are still there after about 40 years, as a reminder of what can go wrong!

I've heard of disk heads being propelled at great velocity, though that may be just a scary story told to young people, too. 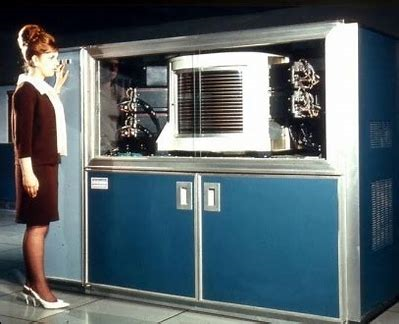 If a read/write head contacts the spinning disk, it could (I suppose) get ripped off the actuator arm, and thus be accelerated to the extent that it penetrates the glass on the door and causes mayhem in the machine room.

Physically-large removable disks would not have this problem - the disk was lowered into a well in the drive, in the manner of top-loading washing machines. Thus there's quite a lot of plastic and metal between the disk and the unlucky bystander.

This Bryant device looks much more likely to cause mayhem if the disks ever got loose, due to the vertical mounting of the huge platters. 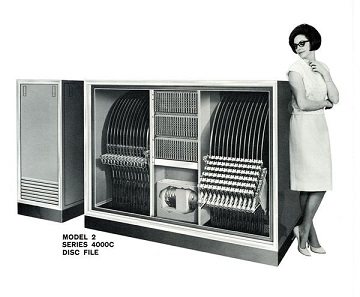 It occurs to me that when disk drives were first being developed, it's quite likely that the mechanisms were exposed (since engineers would presumably be tinkering and adjusting the mechanical aspects of the device) and then your chances of witnessing unconstrained projectile ejection are somewhat greater. So maybe this is a tale from pre-commercialization of disks.

Yeah, that sounds quite fishy. Usually I'd say it's impossible. I've seen classic stacks (and drives *1) break in many ways, but never having a platter go astray.

Of course, there are many different constructions of disks, and some may be more prone to 'ejecting' a platter. But never in a way that dramatic. So my assumption it's a story based on misinterpretation of wording paired with retelling over many years and sources.

*1 - The most impressive I ever had to handle as service engineer was a disk motor coming loose. It was a drive sized like a half height refrigerator, or a top loading washing machine - well, the stack was loaded from above anyway :) The heaviest single part was the motor. About 50 kg any too large to fit into a alpha spider tunk :) It was a direct drive synchronous motor - mind you, these were the late 70s, way before today's tiny implementations - storing the most rotation energy within. So that baby got loose but even this huge moving mass wasn't able to even make a dent in the outer sheet metal of the drive.

Are there any convincing or reliable accounts of an incident like this?

I couldn't resist posting this image taken from "The Commodore Deathbed Vigil" (at the approximate 9:43 mark; 11:00ish in YouTube linked below).

For those interested, I pulled this image from my copy of Cloanto's Amiga Forever DVD, but Dave Haynie also has the full video posted on his YouTube channel here. 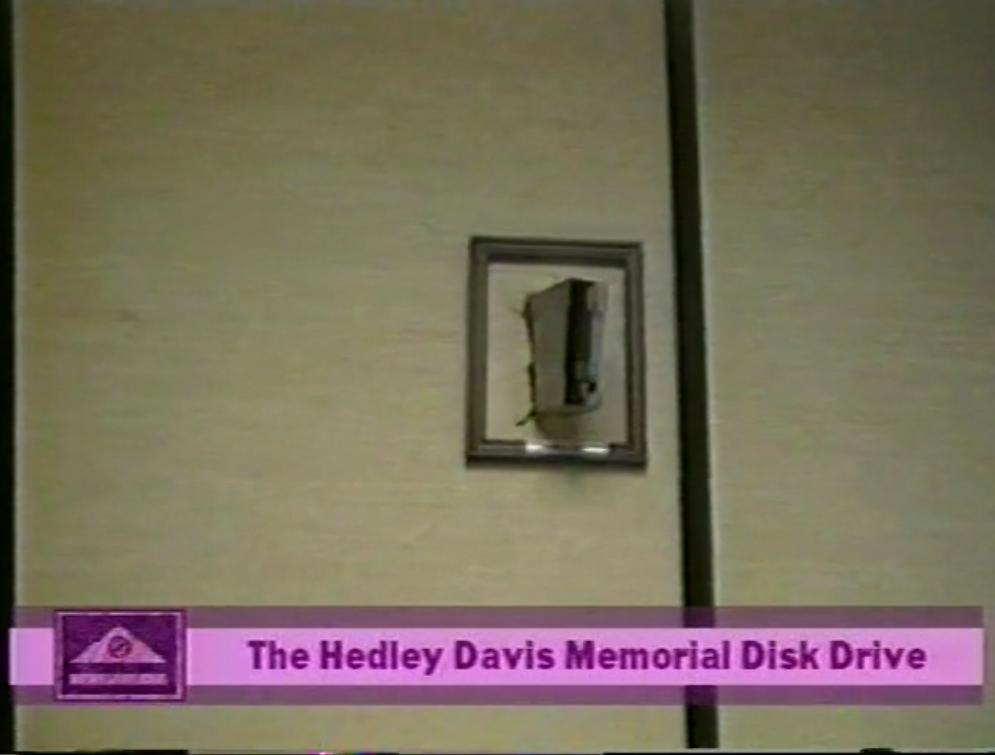 We actually had a similar incident at a company I worked for. Although in our case, it was a telephone embedded in the drywall, thrown by a co-worker after our lead sales manager punched his buttons for a week or two straight. - Those were the days!

Not the answer you're looking for? Browse other questions tagged history hard-disk or ask your own question.

6
How to access old laptop IDE hard drive
13
How can a ST-412 MFM hard drive be integrated with a modern PC?
10
Order of powering down Atari ST and hard drive?
6
Recover files from Dell PP04L Hard Drive
8
How do you find information about your hard drive in MS-DOS?
34
Why do hard drives not use larger platter sizes anymore?
13
Hard coded hard drive BIOS geometries
20
Can a stock/original Atari ST boot from a hard drive?