When first CMOS versions of Z80 became available and were they ever used in (non-portable) home computers?

When Z80 first became available on the market in 1976 it was made using NMOS technology. It is the version that is likely to be most familiar to people interested in retro-computers. For example, to the best of my knowledge, all classical models of ZX Spectrum used NMOS version of the chip, sourced from several manufacturers.

At some point in time, CMOS version of Z80 became available. The Wikipedia article on Z80 claims that CMOS version of Z80 was used in several portable computers, starting from Sharp PC-1500 in 1981. However, upon closer inspection it becomes clear that Sharp PC-1500 is based upon a very different CPU, namely LH5801 (see more details here). Two portable computers that I verified to be definitely using CMOS variant of Z80 are Epson PX-8 Geneva released in 1984 (it uses a Toshiba clone TMPZ84C00P-3) and Cambridge Z88 released in 1988 (it uses Zilog's Z84C0004PSC).

I have two related questions, one factual and another partly opinion-based.

In the 1985 edition of the Zilog's Data Book CMOS version of Z80 (Z84C00) is shown as a new product for 1985. Dated "April 1985", the datasheet contains label "Preliminary product specification", so the actual CMOS CPUs from Zilog are most likely to have become available later that year. This answers the first half of my first question.

Below I am including a partial image of the first page of the datasheet, archived by BitSavers: 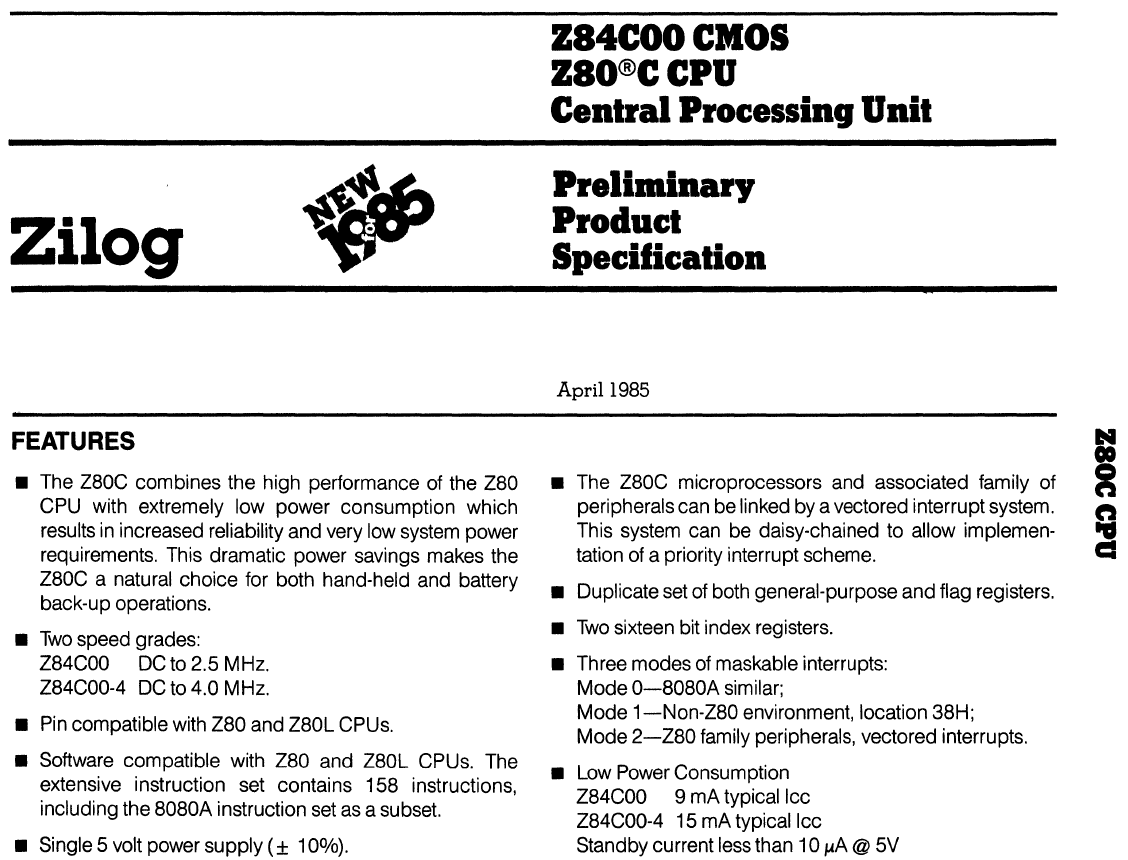 Steve Ciarcia's SB-180 - as described in Byte magazine in 1985 - used a 6 MHz Hitachi HD64180 CMOS processor that was compatible with the Z80. Maybe a kit doesn't qualify as a home computer, though, but it certainly wasn't too portable.

(The company that Steve co-founded to make these kits — Micromint — still sells Z180-based SBCs, amongst other products.)

Using a CMOS does not just happen because of the need of low power, but availability as well. Already in the late 80s, CMOS were sold at the same or even lower price as NMOS variants or being the the only offer some manufacturers had at all. Since the CMOS was in most parts compatible with the NMOS version, decision to use one was made in procurement, not in engineering.

Not the answer you're looking for? Browse other questions tagged hardware z80 or ask your own question.