Are pixels on the Commodore 64 square?

Are "tile pixels" the same size as "sprite pixels", and are they both square (ignoring the rule that multicolor sprites can only be colored in groups of two pixels)?

By "square" I mean that the pixels have a 1:1 aspect ratio.

If the answer depends on the display, then I am asking about the ubiquitous 1702 monitor.

EDIT: I am asking so that I can configure the graphics editor on my modern laptop for creating Commodore 64 artwork. In my case, I am using an NTSC system. 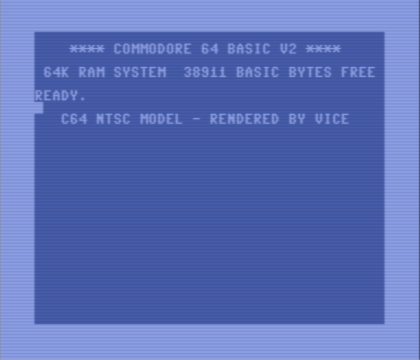 Given that each line is 4/3rds as wide as a hypothetical vertical scan, you can compute that 416 * 3/4 = 312, implying that so you would have square pixels in a hypothetical 312 line display.

Heavy caveats apply: different screens are calibrated differently, to numbers usually near to those above but subject to being only as close as the engineer turning the dials could get.

A further nuance is that total line time may be 64µs or 65µs (depending on revision) in 60Hz world, but will be 63µs in 50Hz world. Your screen will have a PLL of some sort to bring itself into synchronisation with the horizontal sync period, but often that'll result in the line contents being slightly stretched or slightly compressed, further throwing off the arithmetic.

You therefore might as well say that PAL pixels are square, as 92% is within the margin of error given the effective approximations of all the other numbers. But NTSC pixels shouldn't be close.

In practice, for PAL, a single colour pixel that is rendered is very close (0.936:1) to being a square.

Not the answer you're looking for? Browse other questions tagged commodore-64 graphics commodore or ask your own question.

54
Why did Commodore fill their power supplies with epoxy?
11
What modern image editors support non-square pixels?
19
Can a Commodore 64 use two screen modes on one scanline?
7
Can the Commodore 64 display 26 rows of text?
7
Does the Commodore 64 power switch have a history of failing?
6
Where are the pullups for the Commodore 64 keyboard matrix lines?
11
Commodore 64 with partly working keyboard (part 2)
6
Commodore monitor to VGA or HDMI
3
The Sentinel (aka The Sentry) on Commodore 64 - why was scrolling so fast?
5
Why are the CBM control codes for color setting so spread out?