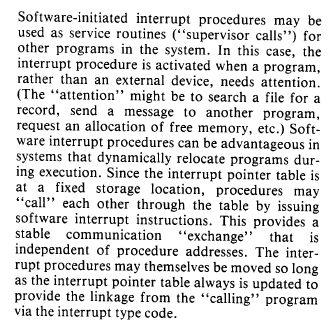 The only 'cost' may seem that the flag register gets saved in addition. In reality this simplifies the OS interface even more, as the flag word is now located at a fixed address (SP+4), so its content can easy be manipulated for return information - like carry set for error handling. The function handler does not need to take care of producing the right flags by some artificial source just before return (like on many 8 bit OS's), but simply sets a bit in a defined memory location, the rest is done by hardware.

No. It was, as said, direct hardware access, including memory management. Disrespecting the logic structure of the CPU is what broke code and made the move to protected mode basically impossible.

5
Why were teletype printers not used for DOS computers?
18
Why did MS-DOS choose the percent symbol to designate variables?
63
Why did DOS use dollar-terminated strings?
37
How did the 8086 interface with the 8087 FPU coprocessor?
16
8086 stack segment and avoiding overflow in interrupts
6
Are .COM executable binaries real mode or protected mode?
11
What did the SELECT command do in DOS?
14
Why did SMARTDRV have to be started with /x when DOS started?
25
Did the original MS-DOS Quake not have a menu item for freelook, and if so, why?
51
Why did some old MS-DOS games lack the ability to exit them?