What happened to the S1 operating system? 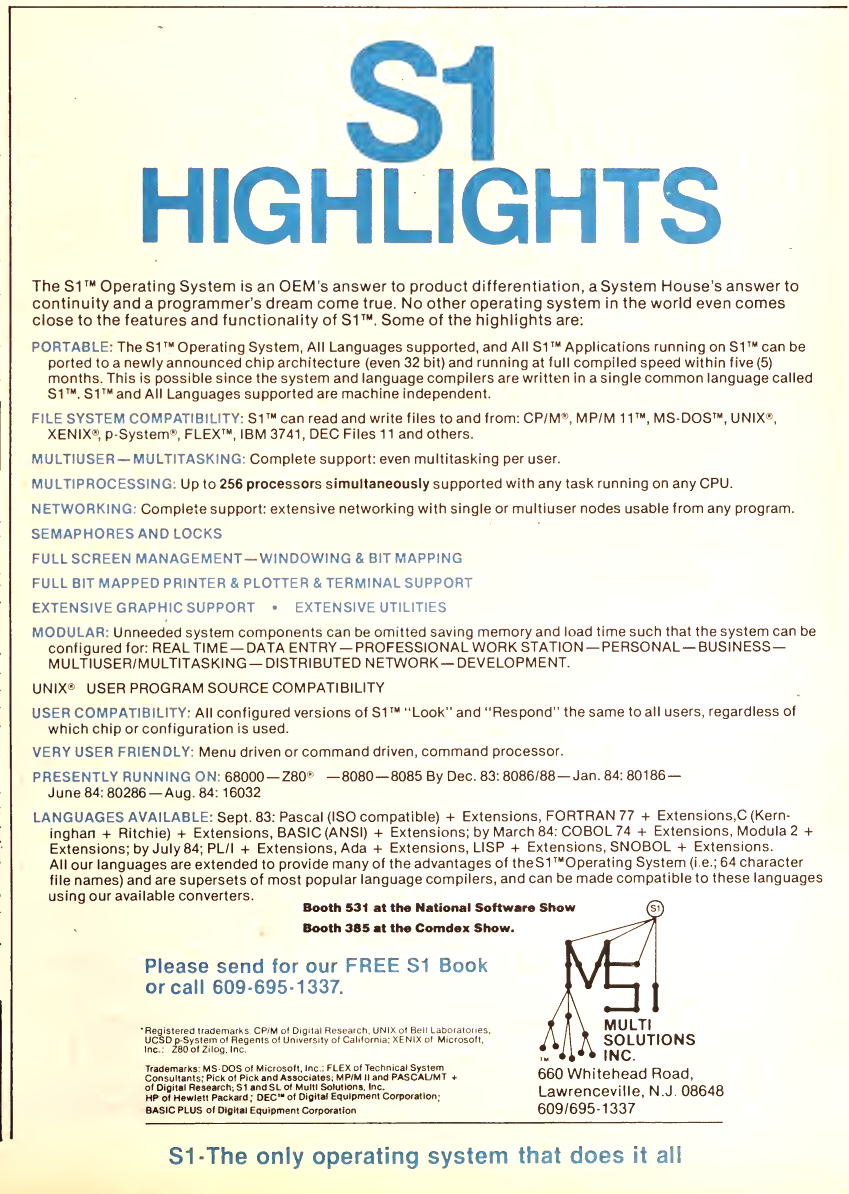 Lack of money is not a problem for the S1 operating system, to judge from press releases from its developers, Multi Solutions in New Jersey. They have signed contracts with a Japanese corporation worth some US$40 million; with that kind of advertising war chest, we will be hearing a lot about S1 soon. [...] The building blocks provided look comprehensive: [...] several programming languages (including its own, called SL) [...] Multi Solutions have announced agreements to develop unspecified applications with American and Swedish software houses.

Then I was hired to write compilers which I had been doing for about six years at Burroughs. The company was a small startup in Lawrenceville, NJ. The CTO was a charismatic engineer named Robert Knight. The CEO was a wealthy businessman, Charles Lombardo, who provided most of the company’s funding. Somehow, maybe because Lombardo’s wife worked on Wall Street, our tiny company, MultiSolutions Inc., actually went public. Even though they actually did not have a product or a revenue stream. The product, under development, was an Operating System called S1. The marketing department used the slogan “Unix is a dinosaur, MS-DOS is a toy.” This was in 1984 and it was true that there was an opportunity for a new OS in the marketplace. To kill any suspense, the OS never caught on.

From what I can see, it probably never got beyond a very basic system running only on the 68000. Jerry Pournelle's last comment on it in April 1985 BYTE (p.361) covers his experience with it before the November 1984 COMDEX show:

Frankly, [S1] sounded like a scam, and my views weren't changed when I found an MSI booth at a show last year and was told they didn't have a demonstration because their computer was lost on a truck or something. They've since told me they don't really like to ship computers around to shows because the machines often don't do well after transportation; but that wasn't what I heard at the time.

Also, MSI's literature seemed outrageous.... They offer a huge range of products, languages and compilers that I'm certain do not exist. Then I met one of the company's representatives. he's one of those chaps who gets too close to you and talks 50 miles a second. He promises anything and you don't even get Arpege. After five minutes with him, I was sure it was all a scam. Just to be safe, I sent a message through the net asking if anyone had ever seen S1 in operation. None had, but some had met the sales chap who so negatively impressed me; and everyone who had met him, including senior CompuPro officials, came to the same conclusion. S1 was vaporware and likely to remain so.

He then goes on to say he finally saw a demo at the November 1984 COMDEX. It was:

It's telling here that, a year after the advertisement you showed claiming it's "presently running on 68000, Z80, 8080 and 8085" and will be running within months on 8086, they demonstrate only on 68000, by far the simplest platform of any they list (excepting the 16032, it's the only one with a non-segmented address space larger than 64 KiB). In fact, the other platforms that a year earlier were claimed to be running now seem to have vanished:

The eight languages also supposed to be available between Sept. '83 and July '84 are also vapourware as of Nov. '84:

The MSI ad sheet gives prices for FORTRAN, C, Pascal, BASIC, etc., etc., but they didn't have them at COMDEX; MSI claims Pascal FORTRAN, and C by the spring of 1985, but the only language they have so far is MSI's own SL, a kind of stripped-down Pascal.

There's little information on the "demonstration" at the show:

I got a demonstration. Of course, you can't see much at a show; there are constant interruptions. Thus, I still don't know a lot about S1.

A brief demo of a system with one (very limited) language compiler and apparently no other software worthy of note, to someone with extensive experience of only primitive single-tasking "operating systems" such as CP/M-68K, provides little evidence that there's actually even an operating system there. The demo could be essentially a command-line shell and a few simple programs, rather than a real multi-tasking, multi-user OS, and nobody who didn't know what to look for would be the wiser.

The following issue of BYTE, May 1985, was a special issue on multiprocessing, with with a cover and article on the AT&T UNIX PC. There's no mention of S1 anywhere in it that I can find.

I scanned Pournelle's column (and, where present, letters in response to the column) in every subsequent issue of BYTE for the next 18 months, though October 1986. Though Pournelle seemed to be keeping an eye on 68000 systems and operating systems (in Oct. 1986 he saw and mentioned the xePIX Gator S/20, a 68000-based Unix system, and OS-9 for the Atari ST), there was never again a mention of S1.

So all the evidence seems to point to a extremely over-enthusiastic marketing of vapourware here, with nothing more than limited demo code actually produced.

Some bread crumbs I found:

DTACK Grounded #34, August 1984, hints that they may have been better in advertisement than delivery:

Then there is John Little of Multi Solutions, Inc. John's polemics against UNIX make our own seem mild, [...] The problem is, John is NOT disinterested. The company which employs him offers for sale an operating system which competes with UNIX and which (naturally) is (ahem!) VASTLY SUPERIOR TO UNIX!

[...] Still, a lot of his criticisms of UNIX are valid; [...] Judging by a 'review' of that system ("S1") in David Fiedler's UNIX newsletter Unique, it does not even properly exist!

Then again, under the title "S1 exists", Jerry Pournelle talks in his Computing at Chaos Manor column, in Byte 4/85, about a demonstration he got at Comdex.

Usually Computerworld and Infoworld are great sources to follow companies. Except, they as well just mention it during 1984/85 stopping thereafter. The last I could find is a note about a licence agreement with a Japaneese firm.

One interesting find is that, according to a business note in the NYT of April 1985, they had a 'subsidiary' called Multi Soft Inc, residing at the same address (a suite in a (very) small office building). Multi Soft (at that address) can be found during the late 1980 to mid 1990 with ads and articles in Computerworld about their line in client server products in IBM mainframe environments.

While I think it's well-established here S1 was pure vaporware, I located some additional information about the product and the company.

Between 1984 and 1985, Multi Solutions announced partnerships with several companies for S1 licenses, including Philips Medical Systems, Computer Engineering & Consulting (Japan), and (under the headline "The S1 Lives!") Entronix AB (Sweden). Datamation mentions Multi Solutions had "virtually no revenues since its founding" in 1982.

Yet, a Personal Computer World columnist claimed in 1984 "the US stock market has already found over a million dollars" for the company. And Japanese computer magazine I/O printed what I believe is an advertorial written by John Little of Multi Solutions, complete with a two-page feature grid demonstrating YES, S1 can do everything the competition cannot.

One oddball reference I found was buried in a report on the National Software Show in San Francisco, 1983. The operating system is bafflingly called "F-1" here, and the reporter notes Robert Knight "wrote the language in which it's written," a claim Jerry Pournelle alluded to obliquely in one of his Chaos Manor columns.

In 1986, S1 was mentioned in the S-100 Journal's letters to the editor page by a reader interested in the "highly-impressive" operating system. An editor responded he too was excited but

they want to sell it only to OEMs in large quantities, so I lost interest. …they have it there fully configured for the CompuPro 68K. All they'd need to do would be to make copies, ship them out, collect the money, and hire a person for telephone technical support.

This sounds like another clue that a press demo of some sort was available for the CompuPro 68K.

The topper is a PC World article from June 1985. Headlined "Operating System Operator", the writer describes his dealings with a "fast-talking" Charles Lombardo. The article reprints a Multi Solutions ad with stone tablets carved as microchips in the style of the Ten Commandments. When asked to produce a list of potential S1 vendors, Lombardo claims the partnerships were "classified" (even though Multi Solutions had been announcing them to the press for two years by this point). When asked to produce the operating system itself for review, Lombardo declared:

"Our staff would be spending all their time answering phones and giving magazine reviewers technical support if I released copies. We don't have the resources for that. Besides," he added, "your reviewers couldn't understand it. It's unlike anything they've seen."

By 1989, Multi Solutions was advertising HyperCard stacks in Mac magazines (note the "S1" bubble in their corporate logo). As with the earlier advertising, the ad copy sells the stacks as capable of doing everything anyone would ever want, employing the same kind of rolling hyperbolic one would find on a label of Dr. Bronner's soap.

But at the bottom of the ad is a rather telling clue: Beneath "ABSOLUTELY THE GREATEST VALUE EVER!!!" the company's phone number is listed as 1-800-888-HYPE.

Not the answer you're looking for? Browse other questions tagged history operating-system or ask your own question.