What is the context of the button "Is MS DOS a feminist?"

I just saw this button in the Computer History Museum, and I'm wondering what is the context? 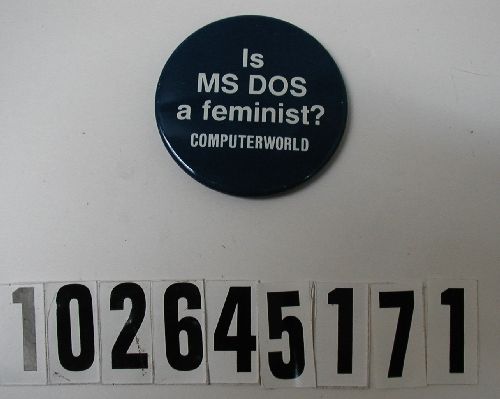 Context removed, "Is MS DOS a feminist?" is about the most non-sequitur thing I've seen.

The honorific "Ms." didn't always exist. It was popularized by the feminist movement as an alternative to Miss (woman is not yet married) and Mrs. (woman is married),

But it took feminist activist Sheila Michaels to bring [the "Ms." honorific] into consciousness of the feminists of the 1960s and '70s. Ms: The honorific with unintended meaning

The idea was that a woman's standing shouldn't be related to her marital status. There was even a feminist periodical created by the same name Ms..

There is nothing more to it. "Microsoft" is abbreviated "MS".

This honorific was controversial in the historical period when Microsoft DOS was the main operating system for PCs at that time and when misogynism was a bit more rampant in the world of computing. Many considered it an amusing pun. Others thought it just said something about the wearer. As an artifact of its time it is an appropriate item for a museum that only computer historians might reflect upon.

Not the answer you're looking for? Browse other questions tagged ms-dos or ask your own question.

20
Logo of a bow tie guy with a spoon
17
What is the best way to obtain old versions of MS-DOS and Windows?
8
How do you find information about your hard drive in MS-DOS?
5
Can't install El-Fish on MS-DOS 6.22
15
Running DOS, Windows 3, and Windows 98 from one FAT32 partition?
21
Sound driver for DOS or Windows 3.x that used the PC speaker?
4
Use a USB mouse for DOS games
51
Why did some old MS-DOS games lack the ability to exit them?
24
What is 'Adaptive Tile Refresh' in the context of Commander Keen?