Is there any code in Firefox (as of 2020) that comes from Netscape Navigator?

Inspired by comments on the previous question Is it true that Netscape Navigator eventually became Mozilla Firefox? (Answer: Yes).

In 1998, Netscape released a large amount of their existing source code as open source, and this became the basis of the Mozilla and eventually Firefox code bases. Over the years, large sections of this have been rewritten, although some of those rewrites were themselves started within Netscape (e.g. the "NGLayout" engine which became "Gecko").

Are there any sections of code in Firefox version 74.0 (released March 2020) which are basically unchanged from code which was actually part of pre-Mozilla Netscape releases (Communicator 4.0 or earlier)?

A number of components still present in Firefox date back to the first code drop in 1998 and were probably present before that. One of these is nsprpub, the NetScape Portable Runtime library, and it has some code snippets which are still identical to those in the first public CVS commit (as verifiable from the VCS archives). For example, ptthread.c’s _PR_InitializeStack:

hasn’t changed at all in 22 years. _PR_InitThreads, further down, has large portions which haven’t changed either. Over half of the original ptthread.c is still present in the current version.

Firefox has seen a great deal of development over the last 22 years, both in maintaining the original code and in re-writing large portions. Currently, much of Firefox is being converted from C++ to modern Rust code.

That said, there are certain core pieces to the browser that maintain code from the time it was open-sourced. A reasonable place to look is the HTML Parser within the Gecko engine. This makes sense because even early versions of Netscape Navigator need to be built out around the basic functionality of parsing the HTML standard, which itself has evolved over the years in a backwards compatible manner.

Using the current Git repository for Gecko, located on Github at mozilla/gecko-projects, you can view the revision history of the HTML parser. The linked file, CParserContext.cpp is part of that original HTML parsing core, and you can see the history goes back 22 years. 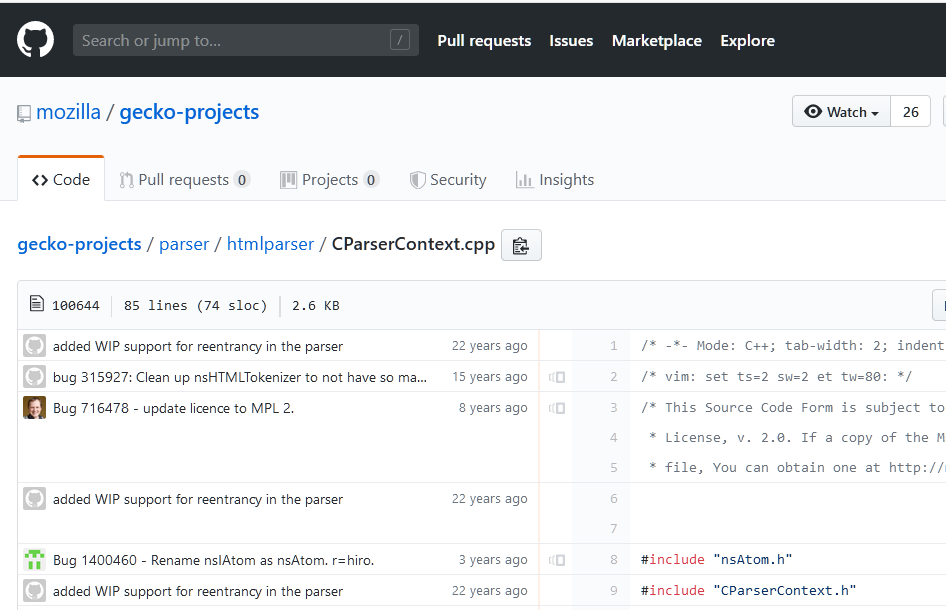 My impression of the transition is that many of the same developers just kept working on what they had been working on within Netscape. This was more of an organizational transition and not a real change in the people/minds behind the actual code. I think this is an important point to make, if one is interested in history as a story about the people who made it, rather than just a collection of the artifacts the people made.

This is just an example, and I am sure you can find lots of code in the Github repository (which incidentally mirrors the "official" repository that uses Mercurial for source control). that originated with the release of the Navigator source code in 1998. Just focus on "foundational" functions like parsing and processing of the document model, and much of the already mature code from Netscape's days are likely to still survive.

Not the answer you're looking for? Browse other questions tagged history netscape or ask your own question.

34
Is it true that Netscape Navigator eventually became Mozilla Firefox?

9
What is the first computer architecture that knew code from data?
7
Was there any indication that video game companies tried to circumvent Game Shark?
34
Is it true that Netscape Navigator eventually became Mozilla Firefox?
12
Were there any NMOS (or PMOS) processors that could tolerate a stopped clock?