What 1970's terminal was black on white and had an orange keyboard?

In high school, I programmed on a terminal that was retro THEN, and I need help remembering make and model.

White screen, black text (seemed very unusual to me), no lowercase, 24x80, and I have this vague memory of "orange", the casing, the keyboard, something. This was 1982, but I'm guessing the terminal was mid-1970's.

I used it as a dumb terminal only with a Data General machine, but the terminal was not DG.

Can anyone help me? I'm hoping the black-on-white screen is unusual enough to ring some bells. 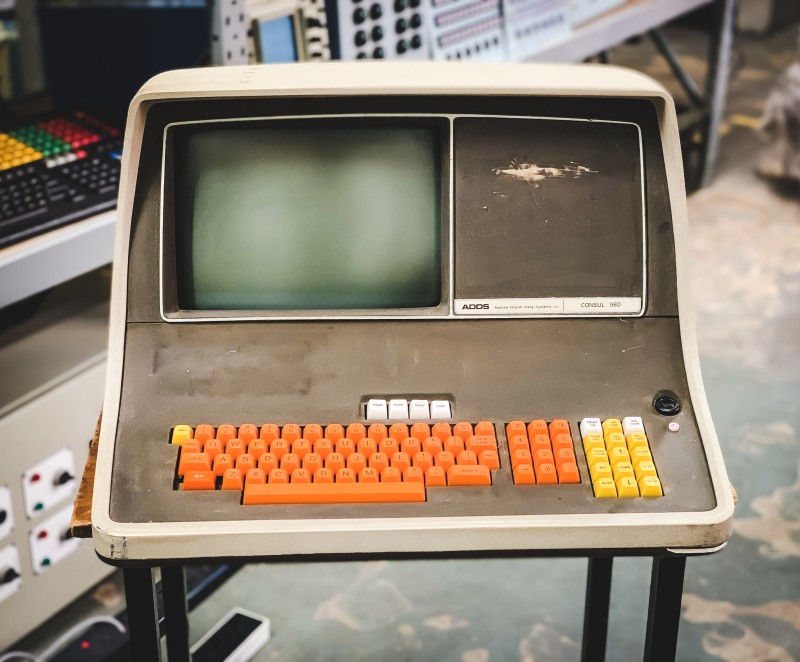 The display was black on white.

It did support lowercase. Solomon Slow is correct. The Data General C/150 certainly supported "console characteristics" which could disable lowercase transmission (i.e. it would convert lowercase bytes to uppercase before transmitting them to the terminal), and I did know this at the time. But, for whatever reason, I never noticed this machine had lowercase. Why our system operator disabled lowercase, I don't know, but it was disabled as well on our long-serving VT52 which also supported lowercase.

As you can see, bright orange keys. I don't recall the cursor control and numeric keypads, but everything else rings a bell.

Walter Mitty suggests it might be a VT-100. The classroom was filled with mostly Data General Dasher D200 terminals, with three oddballs. One of the oddballs was a VT-52; that one I remember. That's why I know the one I'm seeking was not a VT-100; it would have been too similar. The VT-52, incidentally, was a nice little terminal. I didn't like it at the time because it was too incompatible with DG software, but I could write custom software for it that was pretty cool. (The third oddball was an Apple ][ rigged up as a dumb terminal. That was horrible, and I only used that if everything else was taken.)

However, I'm pretty sure now that it's an ADDS Consul 980, and I thank all of you for contributing.

Not the answer you're looking for? Browse other questions tagged terminal identify-this-computer identify-this-peripheral or ask your own question.

6
What monitor could render APL2 characters in 1985?

24
What is the difference between the "Return" and "Enter" keys in the VT100 terminal?
3
What trial-and-error method to use for determining serial terminal settings (RAC2-8-EK)
12
What was the most popular CP/M terminal type?
6
Can escape sequences be entered directly from keyboard to terminal for VT100 and similar?
12
What was the largest resolution supported by terminal escape codes?
88
Exactly what color was the text on monochrome terminals with green-on-black and amber-on-black screens?
11
What year was my old, long-lost IBM PC born? And which form factor/model was it?
8
What was the first OS with the type-ahead capability from a dumb terminal?
5
What is this "switch register - display" and what was it used for?