How do you use the INHIBIT pin on the Apple II bus?

Pin 32 of the Apple II bus is a signal called /INH (short for "INHIBIT"). Some of what I found online about using this pin for an Apple II expansion card suggests it was inconsistently implemented across the various versions of the Apple II.

Pin 32: this is the INHIBIT pin on all machines. This behaves differently on all three machines: the II and II+ only allow the $D000-$FFFF ROM area to be inhibited. The IIe allows RAM to be inhibited as well, but has strange interaction with main and auxiliary memory. The IIgs only allows this signal to be used if the machine is running in slow mode.

Other references simply say that /INH disables all the motherboard memory. Which description is correct?

Other references simply say that /INH disables all the motherboard memory. Which description is correct?

Yes, it was first used with the Firmware Card holding either Applesoft II ROMS or Integer ROMs (*2). Not much later with the Language Card (16 KiB Card) for Pascal.

In the early 80s memory cards like the Saturn, which were based on an extended Language Card scheme did use it as well.

*1 - I've been once told, this was due the sequence the Apple IIe was developed. The new handling for /INHIBIT was fixed in the MMU design, before the 64 KiB expansion was fully defined. But I can't find any reference here, so take it with a grain of salt.

*2 - IIRC there were as well third party ROMS with FORTH(!), PILOT and some enhanced BASIC.

As far as the Apple II and II plus are concerned, both Jim Sather (Understanding the Apple II, 1983) and Titus, Larsen & Titus (Apple Interfacing, 1981) agree that /INH affects only the the onboard ROMs: 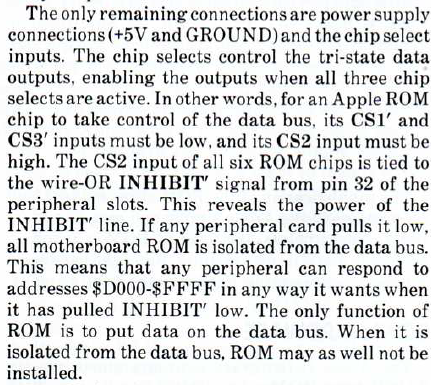 (I know this is just a third of an answer, really, but I only have no reference material for the IIe or IIgs on hand.)

Not the answer you're looking for? Browse other questions tagged hardware apple-ii or ask your own question.

22
What makes slot 7 of the Apple ][ unique from 1-6 and how was this used?
12
How does the Amiga chipset RGA bus work?
10
Apple II bus: IRQ and DMA priority
16
How do accelerators and CPU cards work on the Apple II?
8
Did any Apple II games use a "timing resistor"?
7
Why does this Apple //e drops into system monitor when booting?
30
Why did the Apple IIe make a hideous noise if you inserted the disk upside down?
11
How many cards could you put on an S-100 bus?
3
How exactly does the Apple II monitor set and use the "last opened" and "next changable" locations?
8
Did the Apple II Integer BASIC use SWEET16?