I am creating a minimal Z80 computer with serial output on a breadboard. I have kind of moved up from the last question, where I was executing instructions on Z80 using specific connection of resistors on data bus. Now I am finally hooking up the Z80 with ROM and RAM chips. Many websites list that the maximum space that the Z80 itself can address is 64K (2^16). I have 32K SRAM chip and 32K EEPROM, so I want to add both chips to the 64K address space, it just fits to the limit, right? Would it be possible to fully operate with whole 32K RAM and 32K ROM without using manual bank selection to determine, which address space part should be used?

I was thinking about using 74HCT139 1 from 4 decoder. I want to divide 64K address space into four parts of 16K. So I will be able to use 14 address pins to address 16K and 2 address pins will be free to use in 74HCT139. Thanks to the decoder I will get 4 signals, which will help me to get into 1 of the 4 address spaces. For this case I would like to use OR gate like 74HCT32. Please see the image below, I tried to express myself through the picture. Each chip (ROM and RAM) has 2 address space parts, which means, that I will be fine using 0 or 1 to determine, which address space part is indeed.

So my question is:

Is my decoding logic valid? 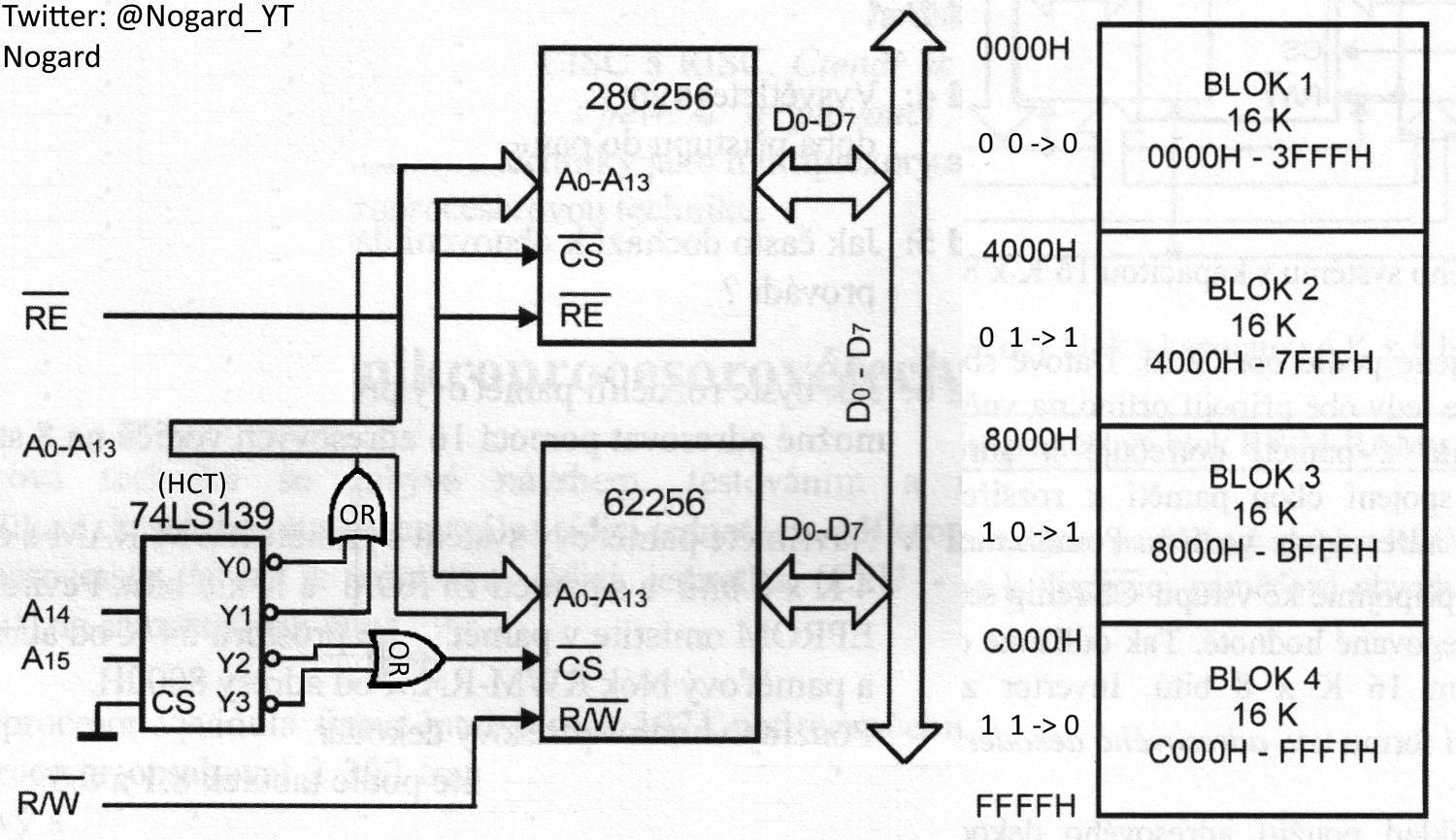 I have solved a similar problem when reworking my 8085-based OMEN Alpha computer for the Z80 CPU. The memory part is really simple: 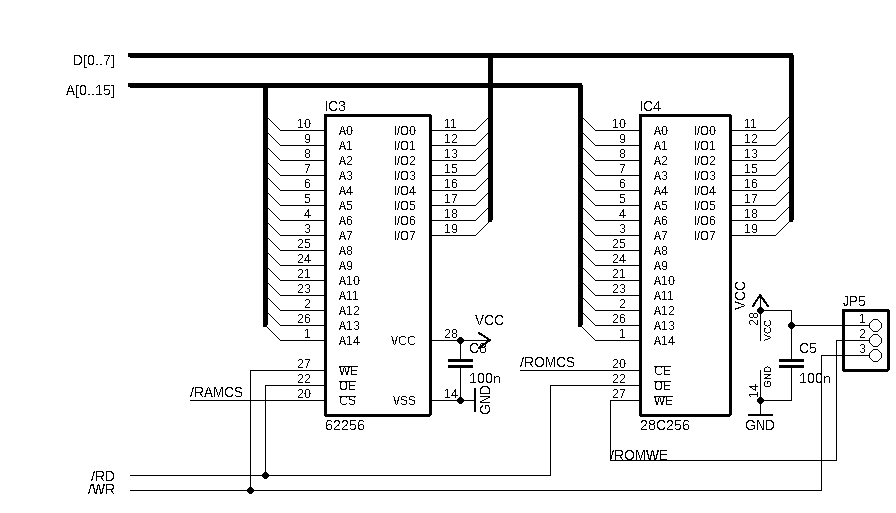 You have two memories, 32k each, and you should map the EEPROM from 0000h, RAM from 8000h. I use common data and address bus, as well as the control bus (/RD and /WR). The only memory-specific signals are /RAMCS and /ROMCS. They are generated by 74HCT00 chip this way:

As you can see, all you need is the A15 (the highest) address signal, gated by /MREQ signal.

Your observation about the 64K address space is correct, your 32K RAM and 32K EEPROM will be able to fill that address space to 100%. In Z80 designs, the ROM/PROM/EPROM/EEPROM is usually placed starting at 0x0000 since when you do a RESET, the Z80 starts executing at 0x0000 and you usually want to have your program start there.

Of course there are many variations on this depending on your application but this is probably a good place to start.

If you were merely using the two 32K devices as they are, you could use the A15 address line as your select between the two. A15 would be low for the first 32K of addresses and could serve as the chip select or /CS (normally an active low signal) and the inverse of A15, or /A15 could serve as the /CS for your RAM.

So all you'd need is an inverter such as a 74LS04 or similar. If you want to split into 4 spaces, a decoder such as the 74LS139 is a good choice and your logic looks ok to me.

Sure, it works, but then again, why decoding four 16 KiB blocks when it's about two 32 KiB chips? All you need to decode is A15.

Inccoperating a A14 is rather pointless and using a'139 looks like overkill unless there is some future use. It also adds signal time, limiting maximum speed. Instead this might be done with a single NOT gate, like one element of a '19 (*2) put inbetween A15 and CE of the RAM, so way less effort.

(This might be already covered in missing parts of the schematic)

But more important then decoding is the way access is handled. For one, the Z80 does not supply any R/W signal like the for example Motorola, but separate signals for read (/RD) and write (/WR). Equally important, it provides a /MREQ signal marking memory access.

All three need to be incooperated to generate the needed /CS, /OE and /WR (*3) for either chip.

*2 - Or one element of an all ubiquitous 7400 NAND with both inputs connected. On a 74xx design there's are always at least one left :)

*3 - In fact, since you're using an EEPROM, /WR can be generated for both to allow in system updates ... maybe with a security switch to disable this during non update times :)

Not the answer you're looking for? Browse other questions tagged z80 rom ram or ask your own question.

9
Patch BBC Master ROM using Sideways RAM?
14
What is the Circuit for a 16K or 32K MSX computer cartridge?
7
Floating control during bus sharing
4
How was the second bank of Apple IIc ROM accessed?
15
Could a Z80 address a total of 128 KB of ROM and RAM?
5
Hitachi HD630x executable format
24
When did half-bad RAM chips stop being available?
4
Cannot assemble BASIC with high memory workspace (Z80)
20
How did old computers address far more than 64K of memory despite only having a 16 bit address bus?