Who built the first electric/electronic adder?

The first electricity-based adder presumably used relays. (The electromechanical relay was invented for the electrochemical telegraph for repeaters in 1831 by Joseph Henry (1797-1878). I can't figure out who created the first adder, however. It's also not clear to me if the first adder was binary or decimal. I think that it was probably a ring-adder in Base 10, similar to those used on the Univac, but I have no evidence, and I've been unable to find the answer for some time now.

EDIT: Hollerith's patents (395,781, 395,782 and 487,737) do not describe an adder. Indeed, the only mention of addition is in 395,782 patent, which states: "A method for compiling such statistics must be capable of counting or adding units according to single statistical items or combination of such items." So it's not clear from this if Hollerith had an existant adder, or if he had one and decided to keep it a trade secret. 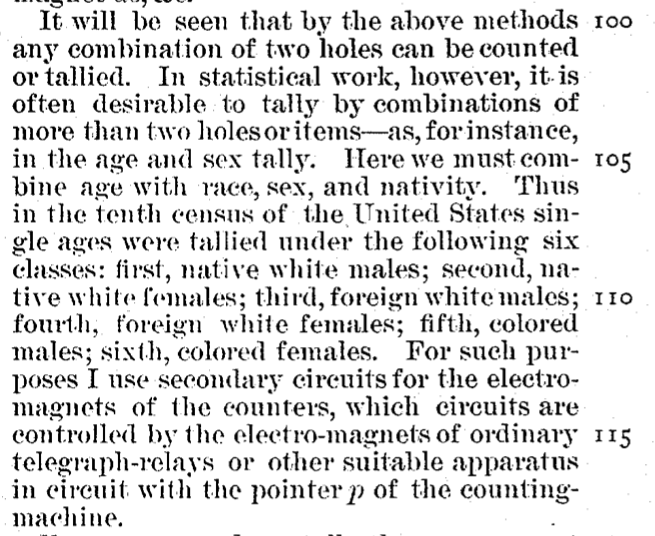 So clearly Hollerith had relays and he understood about adding... but he didn't have an adder. The 395,781 patent states: "When deemed advisable, mechanical counters may be included in the circuits containing electromagnets, for indicating the number of cards deposited in the boxes." So Hollerith used mechanical counters, which date back to the invention of the Step Rockoner and Leibniz.

So who build the first electric/electronic adder?

EDIT2: Now I'm beginning to remember that they were created for the Geiger Counters, and that Mauchly saw them and realized that if you could do addition, you could do everything.

Well, there is no definite answer, as an electric or even electronic adder would be useless before other machinery/circuitry would be available to feed it and take results fast enough to make it worthwhile. This wasn't the case way into the 40s as up to them (electro) mechanical adders were not only sufficient well developed, but also quite capable to peep up with data feed.

After 1945 development of computers able to use the advantage of electric/electronic adders/ALUs did take off, so pick your favourite for 'first' and make sure to select enough attributes to make it the fitting one :)

Not the answer you're looking for? Browse other questions tagged hardware early-computer or ask your own question.

13
What computer first facilitated multi-precision arithmetic
12
What was the first mass-market, 16-bit microcomputer system?
15
Who decides what is the memory address that the CGA video buffer will be mapped to?
2
When was Tantalum first used in computing?
16
Do we know the problems the University of Manchester's Transistor Computer was intended to solve?
3
What is the first (say early) use of switches (mechanical or electromechanical) for sake of processing (like automatic motor control)simple data?
9
When was the first tri-state IC produced?
1
Why didn't the Whirlwind I use a high persistence crt or something?
4
Does the Sega Megadrive 2 have built-in protection against reverse polarity