What's the name of this CRT monitor?

What's the name of this output retro gaming monitor device? The following is a still from the Netflix production of 'Bandersnatch', a 2018 interactive movie, set in Britain, mostly in the year 1984.

The CRT Monitor has buttons which read 1 to 8, RGB and Video. A microcomputer is connected (not shown) to which a joystick is connected.

It’s a regular 80s-era TV set, specifically a Ferguson MC01 (from a 1986 Argos catalogue, see this article): the buttons are volume, brightness, contrast, colour, and channel selection buttons. This particular model was designed to be computer-friendly, with RGB support and automatic switching. Ferguson also produced an add-on for 48K ZX Spectrum computers, the MA20, which provided RGB output for use with such TVs (also mentioned in CRASH). 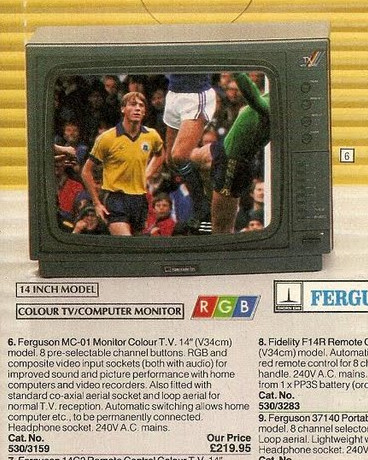 Your photo is a screengrab from Black Mirror: Bandersnatch, and the game shown is the titular Bandersnatch, one of the fictional Tuckersoft games. This also explains the UK spelling on the TV, which can be seen in more detail in this featurette. The computer would be a ZX Spectrum.

(Thanks to Tommy and Michael Graf for contributing to this spelunking adventure.)

6
What was this Apple external CRT monitor that looked like an iMac G3?
16
Can the wrong sync frequency really destroy a CRT monitor?
2
Fixing the horizontal size(width) of an old CRT monitor (Zenith ZCM 1390-E)
6
Retro emulation with perfect V-sync
5
What's the difference between an IBM 5153 (CGA) CRT picture tube and a color TV picture tube?
15
Did any computer allow overscan on a CRT monitor?