Where can this “boot.B” file be coming from on this Spectrum TR-DOS disk image?

After working on some tools that parse the TR-DOS disk image format .TRD files for a while I just noticed that one of the game disk images I had downloaded "La Abadia Del Crimen", only has three files on it when I look at it in a hex editor, or with the tools I've been working on:

You can see ABADIA..B, abadia..C, and ABADSAVEP. (The dots represent spaces, which are ignored, and the last letter is the type or file extension.)

But when I load the disk image into a virtual Beta drive on a Spectrum Emulator, Fuse on Windows in Pentagon 128K mode in my case, I see this when I enter the CAT command: 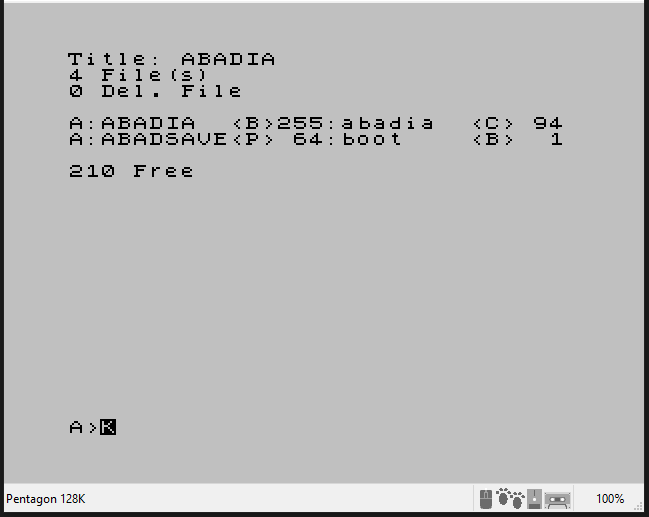 In the disk image the rest of the directory area seems to be blank.

In the TR-DOS manuals it states that a Basic program file called "boot" is loaded and run, and indeed other disk images have the file no matter how I view it and I can see that they are regular Spectrum Basic files. I can find no mention of any kind of "virtual file" or "hidden file" or anything of that nature. I suppose it could be some kind of undocumented feature.

TR-DOS disk images are just flat dumps of the disk sectors and the disk layout is very simple. But it is a game so it could be protected with some trick known in the Russian/clone Speccy scene. Not only that, it's surely a crack since I don't think any western Speccy games were sold in Russian clone formats. And crackers liked to use tricks on their warez.

My attempts to load the file have been failing, but Fuse's support for the Russian clones doesn't seem as good as on Spectaculator, and my 30-day trial for it has ended. My other Speccy emulators don't support the machines it should work on.

So does anybody know what's going on here?

I think possibly your emulator is fooling you. Per this FUSE feature request, leading to this patch in particular and this commit, FUSE synthesises a boot.b and adds it to the disk directory if you open a disk that does not otherwise have one.

So the reason that you can't locate the file within the disk image is that it isn't there. The emulator is inventing it to improve your user experience.

Not the answer you're looking for? Browse other questions tagged floppy-disk zx-spectrum copy-protection zx-spectrum-clones tr-dos or ask your own question.

8
Transferring data from Spectrum +3 disk to tape/.TAP etc
9
What are the most common Apple II disk image formats and what hardware disk drive emulators can use them?
3
What file formats were used for binary executable files on later Sinclair ZX Spectrums?
4
How did the Spectrum clones with TR-DOS and paged memory load and run code files from disk?
0
Do any of the open source Sinclair ZX Spectrum emulators support both TR-DOS and 3DOS?
0
How do I know where the file directory is stored on a Spectrum +3 disk layout?
1
How does the Spectrum +3 know how many files are in the disk's directory?
2
Are the last 4 bytes in .SCL disk image files for Spectrum clones meaningful or spurious?
10
Understanding the DMK disk image file format used by TRS-80 emulators
6
Reading data of floppies from a ZX Spectrum Swift disk