Why does part of the Windows 98 Setup program look older than the rest?

When installing Windows 98, the part of the setup process where you enter things like product details looks... different. The scrollbars, buttons, title bar and such look more like they belong in Windows 3.1 or Windows 3.11, apparently using "ctl3d" style. 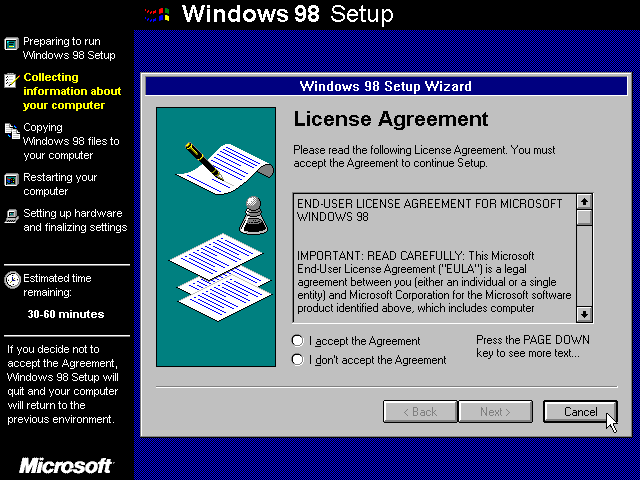 After the "Restarting your computer" step, it looks like the process continues where it left off, except that it now looks like a Windows 98 program.

What's going on here, exactly? Are these actually two entirely diferent programs made to resemble one another? Why couldn't the first half call the same button-drawing code that the second half uses?

Basically, because it is running under Windows 3.1 at that point.

Many PCs with Windows 98 pre-installed were shipped in a variant of the state left at the end of the second phase above; the third phase starts with a “Starting Windows 98 for the first time” message, and follows that up by asking the user for their name and company name. Thus PC buyers got a system pre-installed, but ready to be personalised.

You can interrupt setup at any point, or inspect the image during installation in an emulator, to see what’s present on the disk and thus determine the runtime environment.

It is also possible to initiate the setup process from any of the above environments, which is how Windows 98 handles upgrades (from MS-DOS, or Windows 3, or Windows 95).

I haven't double-checked, but here's my understanding of how it works.

The first half of the installer is a DOS application, with all the limitations therein and then, once it's installed a base Windows system, it boots into Windows to complete the process.

The DOS portion doesn't have access to Windows video drivers, so, judging by the color scheme and resolution, it's faking a Windows UI via the same standardized 640x480 16-color VGA mode that Windows 3.1's default video driver uses in order to look friendly and familiar.

Basically the same approach Windows 3.1 and 3.11 used, except that they used text mode for the DOS portion of their installers.

EDIT: I stand corrected. Apparently it's a three-stage process with a minimal Windows 3.x system in between the text-mode and Windows 9x stages.

Because the setup doesn't contain either. These dialogues are just make to look it alike regular ones. Keep in mind, it's a setup program, not a full figured system. At that time, no (floppy) disk would hold a whole OS plus setup plus whatever data.

Lets be serious, it was already a great step toward a more user friendly and consistent experience than previous setup versions. Better praise it for trying rather good.

Not the answer you're looking for? Browse other questions tagged windows-98 windows-3.x gui or ask your own question.

15
"Your program is testing for optimal display performance" in older Windows games
6
Where is the literature for Windows 3.1 Batch mode setup?
19
Why did Windows pick 260 characters as the maximum path length?
14
Why the DOS extender and DPMI were unavailable to DOS programs on 286 standard mode of Windows 3.0
429
Why did moving the mouse cursor cause Windows 95 to run more quickly?
58
Why didn't Windows 98 need the "Starting Windows 98..." screen?
11
Why did fonts in Windows 1.01's Write application look so poor?
5
Why does my Windows 3.10 only have chimes.wav, chord.wav and ding.wav, but no "Tada.wav"?
21
What windowing system had the first size-proportional scroll bar?