Ask Question
Asked 1 month ago
Active 1 month ago
Viewed 154 times
1
Closed. This question is off-topic. It is not currently accepting answers.

I got a control pedal from an old sewing machine that connects to a 3.5mm jack. It fits in the audio/microphone jack of my laptop.

Not the real thing, but almost: 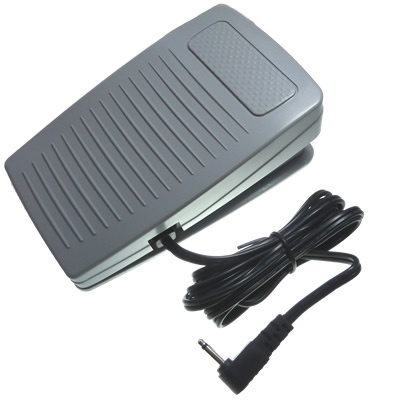 [As mentioned. this question isn't in any way RC.SE related, as it's about generic devices and modern computers. I'll vote for moving to EE.SE and answer as if's already moved]

Extra hardware will do the trick - always.

Adapting it to audio input will require active electronics (an amplifier), thus you'd need a second board and a power supply.

Now, if your Laptop still holds a real Joystick port, then it might be possible by simply building a connector, as the signal might be most likely a resistive (*1), much like from an analogue (PC) Joystick. Then again, having such a port seams unlikely :)

The next best way may be to hack a USB-Joystick as interface. Remove all 'joy' ... aeh mechanical parts and hook a connector for the paddle to the input - maybe with sole analogue adaption if it uses a different ranged resistor.

The ultimate best way is to build your own controller. Like using an Arduino. Hardware would be simply adding a resistor and a connector to the analogue input. Power supply already comes with USB. The controller software will be rather simply presenting the digitized value to whatever data format / logical interface you'd prefer. Most simple would be as serial port, as handling them is already part of basic Arduino workings, Or present it again as joystick interface, more appropriate anyway for analogue data. There are plenty examples on Arduino Sites.

Not the answer you're looking for? Browse other questions tagged audio input-devices or ask your own question.

38
Loading ZX Spectrum tape audio in a post-cassette world
12
Converting SCART to VGA/Jack
14
Is it possible to play Famicom games on the NES and utilize the extra sound channels?
14
What is the relationship between Amiga audio and the MOD music file format?
3
Audio from Commodore 64 to line 1/4 inch line level
3
What is the 26-pin D-sub (DA-26) connector used for on the Media Vision Pro AudioSpectrum 16 Patch Panel?
27
How do I Interface a PS/2 Keyboard without Modern Techniques?
4
PlayStation 2 Slim with analog A/V output having noise interference issues
31
Was it possible to listen to music and work on old PCs? When was it possible to for the first time?
19
Sound driver for DOS or Windows 3.x that used the PC speaker?