I've been looking into the format of .cas files for Tandy Color Computer and Dragon32 emulators. These files are almost exactly byte for byte representations of the data/audio/bit pattern of the actual tapes. We have a nice breakdown of that in another question on our site where it is stated that the length of the "leaders" is 128 bytes.

But some other sites on the .cas format, and some books with documentation on the Dragon32's tape format, state that the length of the "leader block" is actually specified by a system variable (or is it a ROM address?) at location $90/$91. 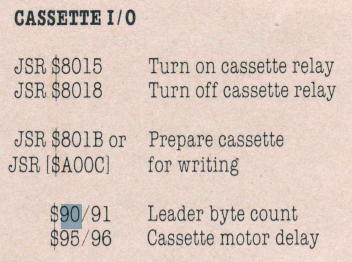 I PEEKed these addresses on a CoCo emulator and they didn't match at all.

So is this a difference between the Dragon and the CoCo? On the CoCo is it hard-coded to be 128 bytes, or is there a memory address to read to get the value that just differs to the address the Dragon uses?

The few .cas files I have are CoCo ones and have use 128 as the length so it's probably safe to use in my code, but I'd still like to satisfy my curiosity.

I've made a couple of discoveries after a night's sleep.

The CoCo still reads the leader length from a RAM address, but its address is two bytes higher in memory than in the Dragon 32:

As for the .cas tape image format, I've found quite some variance. Some might be due to ROM quirks, others due to quirks, speed-ups, or bugs in Emulator code or retrocomputing format conversion tool code. And some seem to be due to copy protection tricks. Leaders of length 128 and 256 are common and are often a byte short or a byte long. Lengths of 14 bytes and 1 byte are also common, perhaps for speeding up loading on emulators. There's more leader length variation in Dragon .cas files than CoCo ones and I guess it's because the CoCo retro scene is more focused on disks whereas the Dragon retro scene is more focused on playing nostalgic games from 30 years ago, which came on cassette.

15
What format is used for CoCo cassette tapes?

15
What format is used for CoCo cassette tapes?
4
Memac Obj files for running and making Tape Format
7
What's up with the ASxxx and the "CoCo Disk BASIC binary format"?
3
Loading a Tandy CoCo or a Dragon 32 machine code program from cassette with multiple "name blocks"