Why did many 9-pin printers use only 8 pins for graphics?

In the answer to another question about printers, the following claim is made about 9-pin printers:

The Epson MX-80, upon which many other printers were based, had nine round pins which were vertically spaced at 1/72" intervals… The MX-80 graphics commands were limited to using the top 8 pins, and only allowed software to specify every other dot (yielding 1/60" resolution or 1/120" resolution) but text mode would exploit the full resolution.

Reading this was a huge a-ha moment for me, as I finally understood why the cheap Epson-compatible printer I used in the 1980s (a Smith-Corona Fastext 80) always left horizontal gaps at regular intervals when printing graphics. It annoyed me to no end that all the solid areas and lines in the images I printed got broken up like this! Below is an example of what I'm talking about—this is a scan of a real graphic that I produced using Doodle on my Commodore 64 in 1987. (I copped the Garfield cartoon from somewhere but added the journal he's holding to promote our class newspaper.) Unfortunately the scan isn't of great quality (and is of a photocopied image rather than the original printout) but you can make out the gaps in some places, and particularly in the area I've highlighted and magnified. 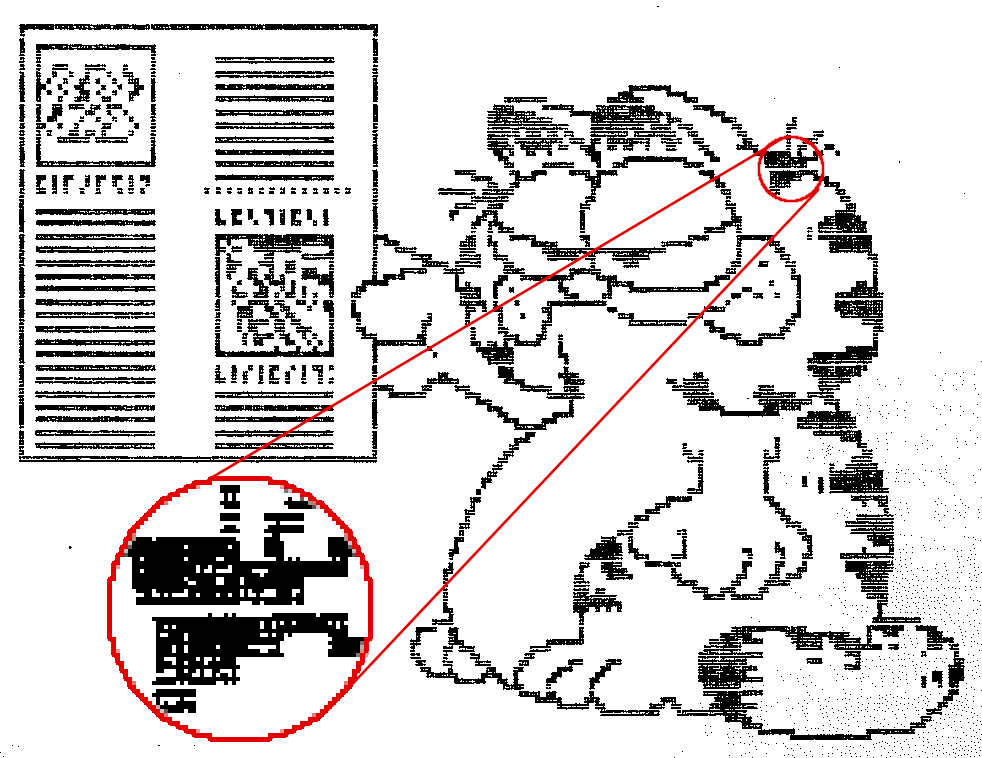 My question is this: Why did the Epson MX-80 and its descendants not use the full 9 pins to print graphics? Was there some technical reason why this was not possible or desirable? (And were any of those printers smart enough to advance the paper roll by the height of 8 pins rather than 9 when printing graphics, thus avoiding those ugly gaps?)

First, it may be good to know that the MX-80 did not feature a bitmap mode for graphics, but only 64 symbols. The MX-80 also used 7 bit encoding, so no room for 8 bit graphic data. It was the MX-80 Type II that included it. So while the name is used simply as MX-80, it's always the MX-80 Type II we're talking.

Second, Just because some printer looked alike, doesn't mean it understood the commands equally well - or it's mechanic had the same quality.

If that was the reason, and if it was constant, it's most likely not the fault of the printer, but a wrong command to advance the paper (ESC+A).

But looking at the picture included, the gaps seam to be less than a pixel height. So it may not have been a wrong command, but simply less than desirable mechanics, always leaving a little gap. This is known from many printers, including genuine Epson MX-80. It doesn't make a big difference for text (especially if always about the same), but comes up in graphics.

These 'modulations' were simply part of bitmap graphics around 1980. Although, printers did advance (*1)

Why did the Epson MX-80 and its descendants not use the full 9 pins to print graphics? Was there some technical reason why this was not possible or desirable?

Simply because it used 8 bit words (bytes) to for data transmission, transferring 9 bit data would have meant doubling the data transmission time amount for 12.5% faster printing. While this sounds strange from today - or even from the mid 80s, then the MX-80 was made, serial connections with less than 9600 bit/s were standard for printers.

Not to mention that it was way more convenient to handle graphic data in 8 bit chunks on computers operating with 8 bit bytes - this includes 'high level part' (*2) of the printer as well, especially for buffering

It wasn't until later when connections were by default faster (like in fast parallel interfaces) buffer sizes larger and print speed became a thing (*3). So printers like the 1986 Star LC-10 included a 9 pin mode.

And were any of those printers smart enough to advance the paper roll by the height of 8 pins rather than 9 when printing graphics, thus avoiding those ugly gaps?

Already the original MX-80 (Type 1) could set the paper advancement in steps of 1/72 inch, essentially to each needle height. Its mechanics operated in 1/216 inch steps. The Type II inherited this. But here as well, advancement was less than perfect, leaving artifacts. They are even visible in the original Epson manual printing: 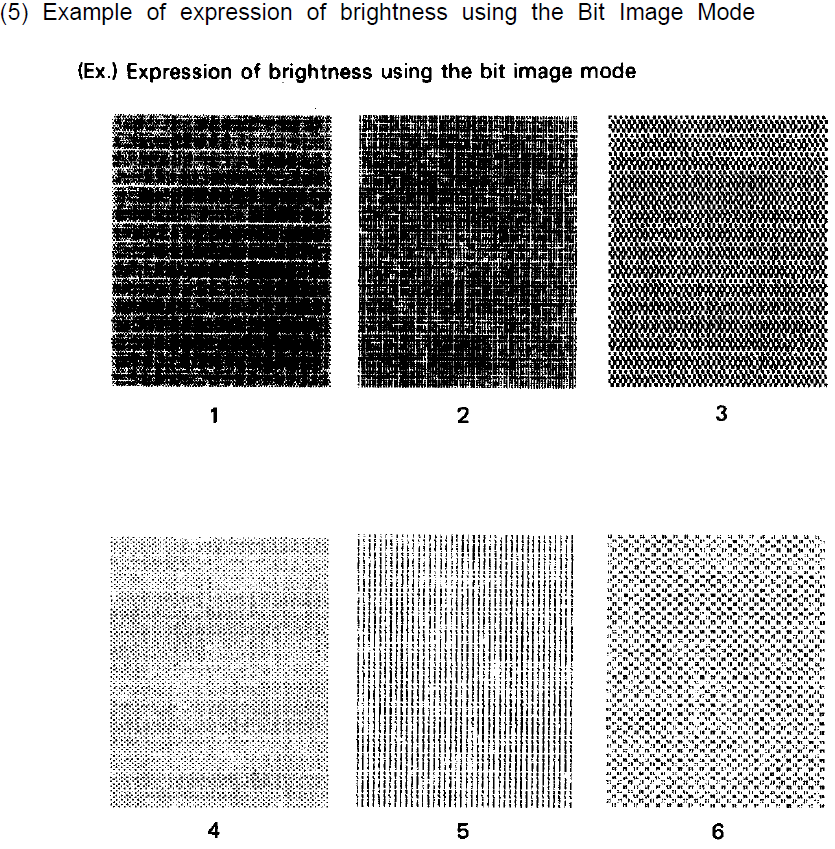 Long story short: Don't expect a 1965 VW-Beatle show features and performance of a luxury car (or in looking back the one of a 1990 VW Golf)

You could have bought a way more expensive printer, or waited 5-8 years for consumer products growing in quality ... or do like you (and we all) did, proudly show the results and live with these tiny, negligible artefacts.

*1 - It's like always, first generation is to fulfill the demand to print / compute / display / type / etc. at all, later generations will (and need to, to compete) improve and add 'luxury' features. The MX-80 is a great example, as it was the second versions that includes more than block graphics. And it took later printers to improve the mechanics to make bitmap look good - the first original one was only meant to make text.

*2 - It included two micro-controllers. An 8049 doing over all control as well as data transfer from/to interface, buffering, conversion from ASCII to bitmap and control of the needles and a (slave) 8041 handling the printing mechanic like head and paper advancement.

BTW, in other areas this sequence was different. For example the Siemens 9003, one of the fastest single head DMP in 1979. Here print quality was given up for speed. It's printouts didn't look great due simple fonts and inaccuracies of bidirectional printing, but it was dammed fast and all in a desktop case... well, desktop only in the sense it needs to be placed on a desk, so not being a stand alone device :))

There would be no technical reason to not use all nine pins, but it doesn't really help either. Remember that the computer speaks to it using 8-bit bytes. Sending 9-bit wide data requires buffering and/or other relatively expensive processing to do the 9-to-8 conversion and back. The upside would be that printing 9 pixels wide would be 12.5% faster than 8 pixels wide, but presumably the processing costs outweigh this.

However, it would not solve the banding problem. On a new printer, banding is caused by minor imperfections in the platen-moving mechanism and so the paper isn't always moved up to align the top of the current line with the bottom of the previous line, leaving an occasional gap. (You are much less likely to notice when it errs the other way and the lines slightly overlap.) On an older printer, banding also comes from the ribbon being worn unevenly, or even because one of the pins has broken.

EscP2 language did specify a 9-pin mode: ESC ^ but it was not very efficient, a whole byte was needed just to send the 9th pixel.

Not the answer you're looking for? Browse other questions tagged graphics printer or ask your own question.

21
Typical dpi of dot matrix printers available in the 1980s

15
Did any system natively use 3-bitplane graphics?
5
Why were teletype printers not used for DOS computers?
13
Connecting Panasonic "Penwriter" RK-P400C to modern PC using USB to serial cable
48
Why did line printers have 132 columns?
43
Why were some early PC 3D cards unsuitable for 2D graphics?
21
Typical dpi of dot matrix printers available in the 1980s
39
Was AGP only ever used for graphics cards?
27
Why did old IBM-PC-compatible computers only have 16 colors available?
5
What kind of graphics hardware did Nichibutsu's 1985 arcade game "MagMax" use?